The world’s oceans are warming.  Ocean warming is the strongest confirmation that greenhouse gases are warming the planet.

The heat capacity of water is among the highest of common substances.  That means that water can absorb a large amount of heat while its temperature changes only slightly.  The measurable warming of the world’s oceans indicates that a very large amount of heat has come from somewhere.  The only credible source for so much heat is the retention of heat by atmospheric greenhouse gases.  Let’s look at the source of the data, and the numbers.

ARGO Oceanographic Program
Rising ocean temperatures have been measured by oceanographic surveys since the 1970s.  However, these ocean surveys were limited in geographic coverage and continuity of data acquisition.  A more comprehensive system, ARGO, was put in place beginning in the early 2000s, with improvements and new deployments continuing today.  Today, ARGO consists of nearly 4000 floats which continuously measure ocean temperature, salinity, density and currents from the surface to 2000 meters.

ARGO floats measure temperature to an accuracy of two-thousands (0.002) of a degree Celsius.  The floats are “parked” at 1000 meters, and every ten days submerge to 2000 meters and return to the surface, where data is broadcast to satellite receivers.  The system provides comprehensive coverage worldwide except for polar latitudes, and continuous measurements.

Ocean *Weather*
Like the atmosphere, ocean temperatures are seasonal, cyclic, variable, and turbulent.  The large number of ARGO floats was designed to adequately measure and characterize the variable temperatures of the ocean.  The volume of data acquired allow scientists to make maps of the changing water temperature and calculate the total heat content in the ocean. 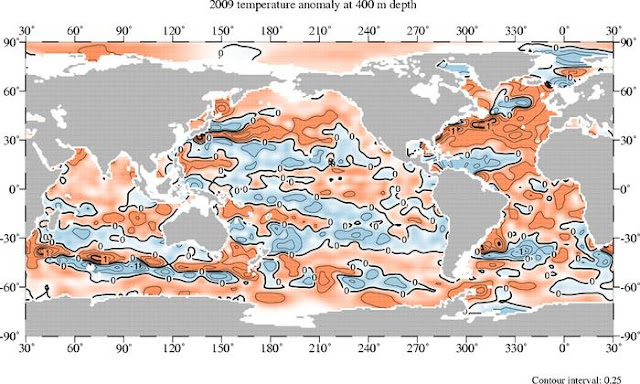 Observations
Surface temperatures are warming the fastest.  NOAA presents charts of average ocean temperature and ocean heat content according to water depth, based on ARGO observations and earlier oceanographic studies. 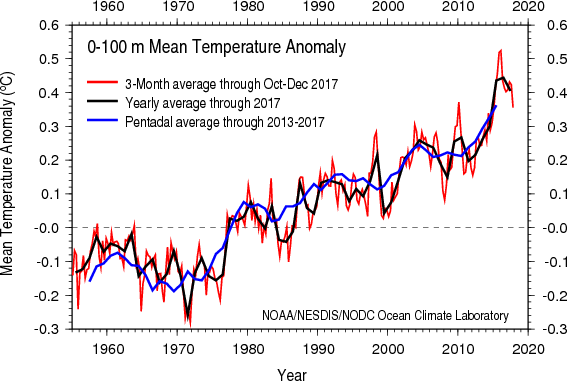 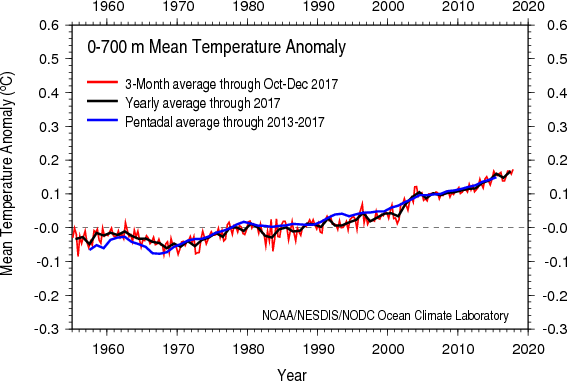 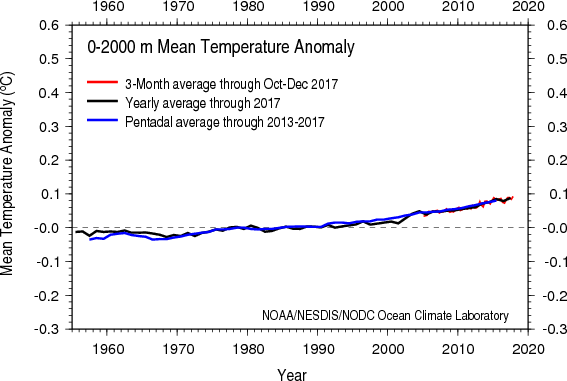 Over all depth increments observed, the rate of warming seems to be slightly increasing. 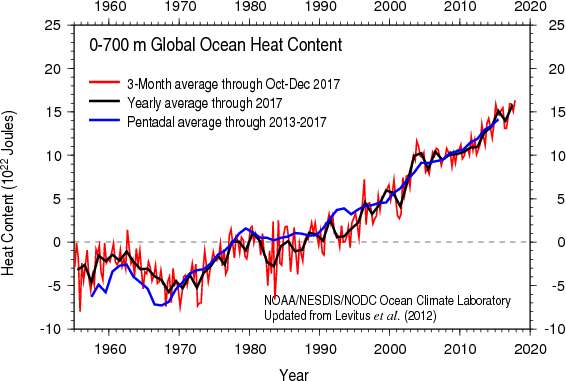 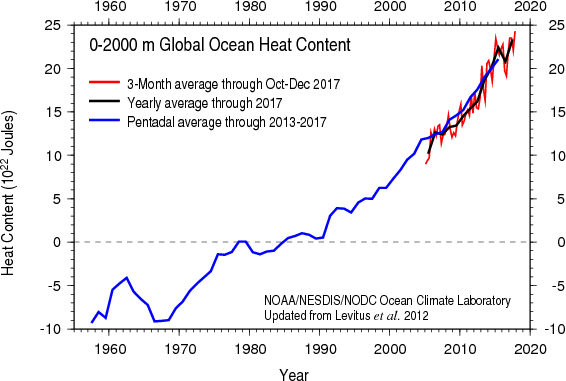 The geographic distribution of ocean heating also shows atmospheric influence.  The ARGO ocean data shows distinct heating anomalies between 30 and 40 degrees of latitude, north and south.  These are the down-welling points of large atmospheric convection cells termed Hadley cells.  You can see atmospheric circulation in observations of ocean warming. 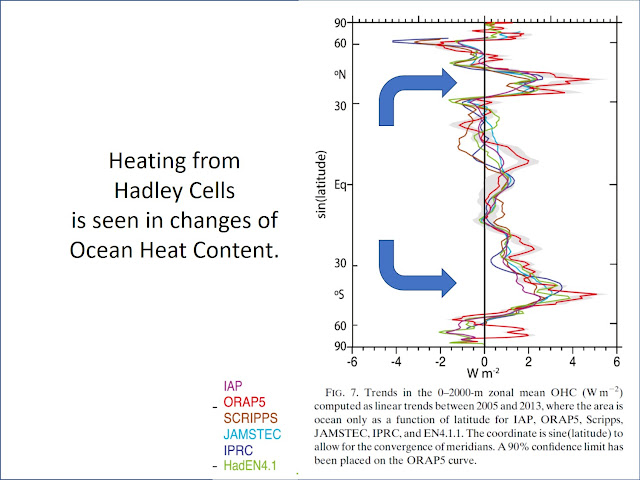 Conclusion
The first post in this series quantified anthropogenic heating and cooling, primarily from greenhouse gases, particularly CO2.  This post looked at the largest heat sink on earth – the oceans.

Posted by Doug Robbins at 7:16 PM No comments:

I have been away from my blogs for far too long.  I will try to post a series on the global heat budget.

Previously, I posted a lot of work on atmospheric CO2, considering the geographic distribution, isotope data, rates of change, comparison to man-made emissions from various sources, and interaction of the atmosphere with global carbon reservoirs.  The latest summary post is here:
http://dougrobbins.blogspot.com/2016/08/the-keeling-curve-and-global-co2.html
I deliberately avoided the question of climate change to focus on the science of atmospheric CO2.

I’m going to present what I’ve learned as a series of short posts, rather than writing a book.
The very short version is this:

The Global Heat Budget; The Very Short Version
People have raised the concentration of atmospheric CO2 by burning fossil fuels.  The volume of CO2 released by fossil fuels has increased sharply since about 1950, and continues to increase today.

CO2 and other greenhouse gases retain heat in the atmosphere.  The quantity of heat is easily calculated as a function of the concentration of CO2 in the air.  We can calculate the amount of heat that has been trapped to date, and we can forecast the heat that will be trapped in the future.

Heat is increasing in heat sinks on earth.  Observations show that the amount of heat appearing in earth’s heat sinks is approximately equal to the heat retained by greenhouse gases.  The heat is showing up as rising ocean temperatures, melting ice, and a warmer atmosphere.  The quantity of heat appearing in these systems has been measured by high-accuracy monitoring programs since about 2003.  The warming ocean accounts for about 95 percent of our estimates of anthropogenic heat.  Retained heat due to greenhouse gases is the only credible source for the heat appearing in heat sinks.

Sea-level is rising.  Sea level rise has been documented by tidal gauges for 130 years, and by high-accuracy satellite measurements since 1992.  The amount of sea level rise matches the observed volumes of melted ice, thermal expansion of the ocean, and ground-water extraction.  The fact of rising sea level confirms observations of melting ice and warming oceans.

Higher atmospheric CO2 concentrations are inevitable for the foreseeable future.  Quantitative forecasts of future heating indicate serious and expensive problems will develop for the nation & the world. 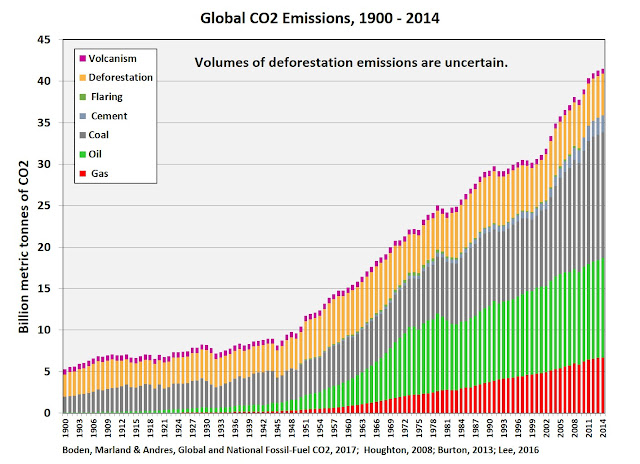 Atmospheric CO2 has risen as a consequence of fossil fuel emissions.  The following chart is my version of the Keeling Curve (http://dougrobbins.blogspot.com/2016/08/the-keeling-curve-and-global-co2.html) showing global CO2 concentration, including high-amplitude seasonal cycles in the Northern Hemisphere, and low-amplitude seasonal cycles in the Southern Hemisphere. 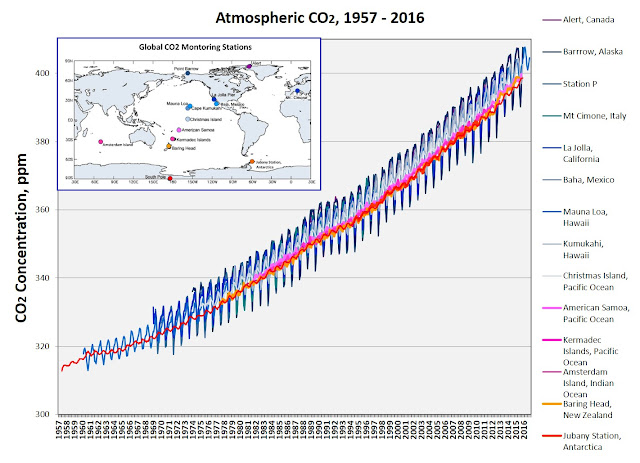 History of Study of CO2 as a Greenhouse Gas
The physics of CO2 as a greenhouse gas is settled science, based on published studies dating back over 150 years.  High accuracy programs to measure melting ice, ocean temperatures, and rising sea level have been in place in recent decades, long enough to yield conclusive results. 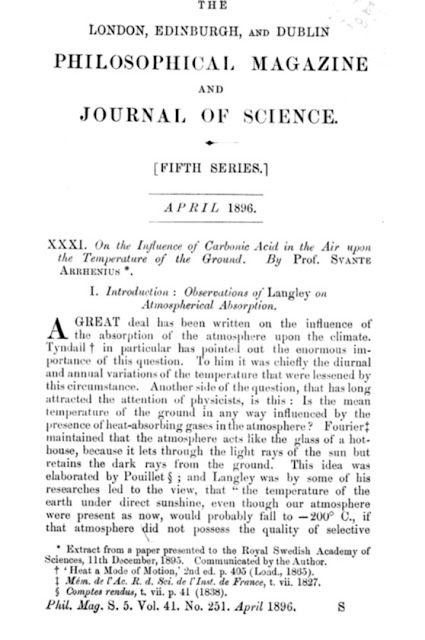 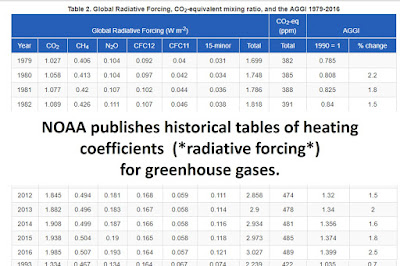 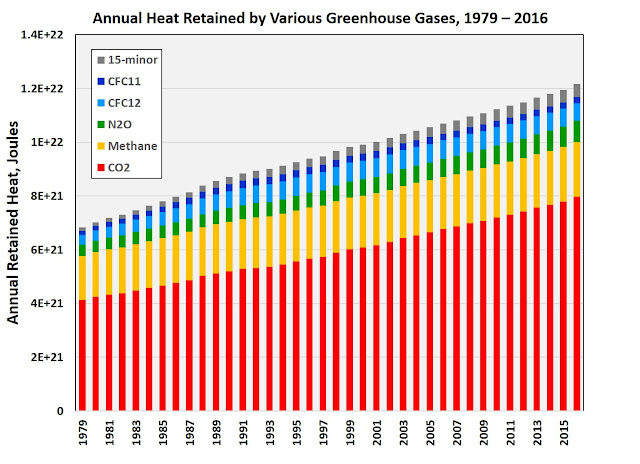 Sulfate emissions have dropped dramatically in the United States and Europe over the past 25 years, thanks to regulations intended to limit acid rain, but world-wide sulfate emissions have continued to grow.  The average global impact of sulfates and black carbon aerosols is shown in the following graphs, but the more significant impacts are regional.  South Asia suffers from the greatest carbon black emissions and impact, while China is now the source of most sulfate emissions.

IPCC Net Anthropogenic Heating and Cooling
The IPCC (International Panel on Climate Change) 5th Climate Assessment contains a table of anthropogenic heating and cooling coefficients.  The IPCC numbers for conventional greenhouse gases are identical to NOAA, but IPCC also recognizes other anthropogenic factors, which can both heat and cool the atmosphere.  These factors act by direct absorption of sunlight, or by a greenhouse effect that is restricted to certain levels in the atmosphere.  The IPCC recognizes the warming factors of tropospheric ozone (O3), stratospheric water vapor (H2O), black carbon on snow, and contrails.   IPCC recognizes cooling factors, including land-use changes (which affect the reflectivity of the earth), stratospheric ozone, and aerosols.

Here is a chart based on IPCC data, showing anthropogenic heating and cooling coefficients (*radiative forcing*). 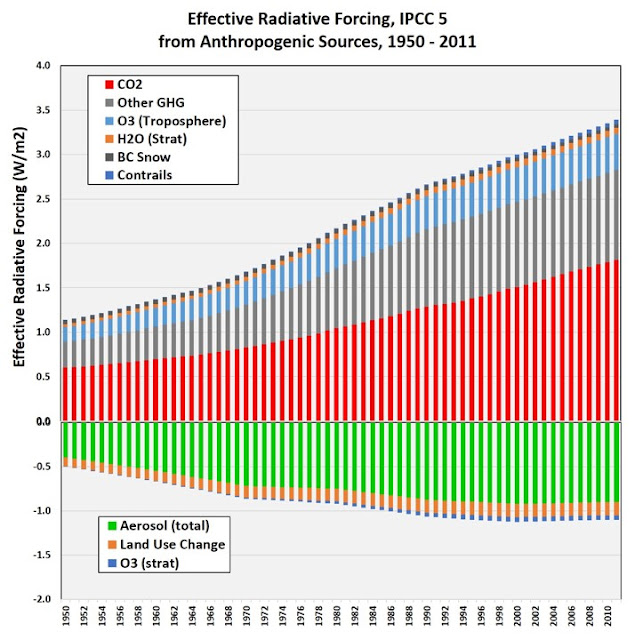 Primary Anthropogenic and Other Heat
Strangely, to me, the IPCC report makes no mention of another source of anthropogenic heat – the primary heat resulting from burning fossil fuels and nuclear plants, and secondarily, the primary heat resulting from deforestation.  The global heat from non-renewable sources is reported in the BP Statistical Review of World Energy.  The energy released by deforestation can be easily calculated from the volumes of carbon dioxide released, which is estimated in several sources.  These sources of heat represent about 5% and 1%, respectively, of the net anthropogenic heat reported by IPCC, and exceed several other minor sources of heat in the report.

Here is a chart showing the calculated anthropogenic heating and cooling, based on IPCC estimates for radiative forcing, plus heat from primary energy. 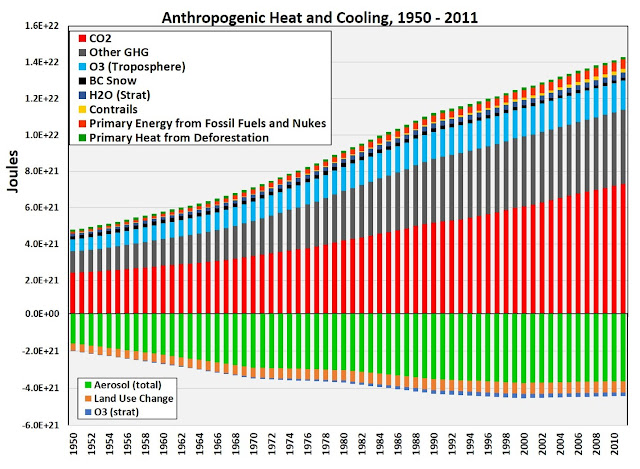 I considered and calculated the incremental accumulation of geothermal heat, due to the retention of heat by greenhouse gases.  Geothermal heat is normally in a steady state, with heat flux from the planet balanced by thermal radiation into space.  The quantity of heat retained is quite small, however, and not worth adding to the heat budget.

Net Anthropogenic Heat
The net heating coefficient (*radiative forcing*) for all anthropogenic heating and cooling was about 2.4 watts/m2 in 2011.  The global average for solar insolation at the top of the atmosphere is 1361 watts/m2.  About 1000 watts/m2 of the sun's radiation reaches the earth's surface.  Anthropogenic heat represents a small but noticeable increment to the natural heating of the earth by the sun, about 0.24% above the natural, steady state of solar heating and radiative cooling. 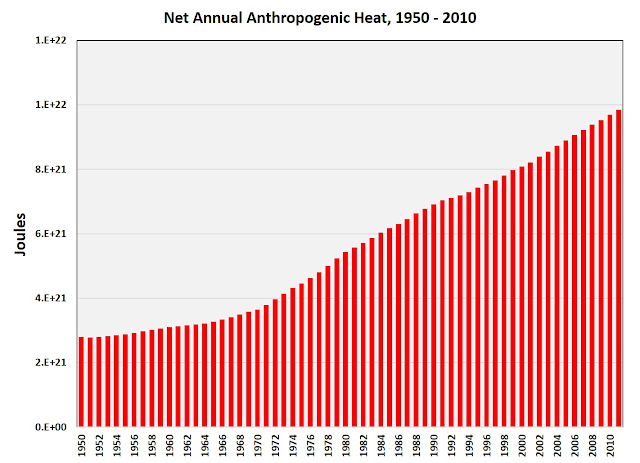 https://science2017.globalchange.gov/
Aerosols caused by human activity play a profound and complex role in the climate system through radiative effects in the atmosphere and on snow and ice surfaces and through effects on cloud formation and properties. The combined forcing of aerosol–radiation and aerosol–cloud interactions is negative (cooling) over the industrial era, offsetting a substantial part of greenhouse gas forcing, which is currently the predominant human contribution. The magnitude of this offset, globally averaged, has declined in recent decades, despite increasing trends in aerosol emissions or abundances in some regions. (emphasis mine).

http://science.sciencemag.org/content/343/6169/379/F1
By nucleating a larger number of smaller cloud drops, aerosols affect cloud radiative forcing in various ways. (A) Buffering in nonprecipitating clouds. The smaller drops evaporate faster and cause more mixing of ambient air into the cloud top, which further enhances evaporation. (B) Strong cooling. Pristine cloud cover breaks up by losing water to rain that further cleanses the air in a positive feedback loop. Aerosols suppressing precipitation prevent the breakup. (C) Larger and longer-lasting cirrus clouds. By delaying precipitation, aerosols can invigorate deep convective clouds and cause colder cloud tops that emit less thermal radiation. The smaller ice particles induced by the pollution aerosols precipitate more slowly from the anvils. This can cause larger and longer-lasting cirrus clouds, with opposite effects in the thermal and solar radiation. The net effect depends on the relative magnitudes.