American Taxes Compared to Other Countries

Conservatives often say that America is one of the highest-taxed nations in the world.  My father recently told me this.  Donald Trump also said the same thing in the same words in his acceptance speech at the Republican National Convention.

If this were true, it would be a problem worthy of examination and serious discussion.  The problem is that it isn’t true.  It isn’t remotely true.  America is one of the lowest-taxed nations in the world.  If it were true that America is a highly-taxed country, it should have a reasonable influence on American tax and spending policies.  We might infer that the United States government is inefficient, compared to other countries.  We might want to focus on cost-cutting, instead of raising revenue to close our fiscal deficit.  But it isn’t true.

Let’s look at the data.

OECD Federal Tax Burden
The Organization for Economic Cooperation and Development is a group of thirty-four countries, which includes all of the Western industrialized economies.  The organization gathers comparative economic data from all member countries.  Tax rates represent tax revenue from all sources, including businesses and individuals.  Taxes include individual income taxes, business income taxes, and all other taxes, including sales taxes, value-added taxes, excise taxes, import/export taxes, natural resource royalties and production taxes.  Tax rates are measured in terms as a percentage of GDP, which is the standard measure of the tax burden across several sources.  The data is available here: http://stats.oecd.org/Index.aspx?DataSetCode=REV 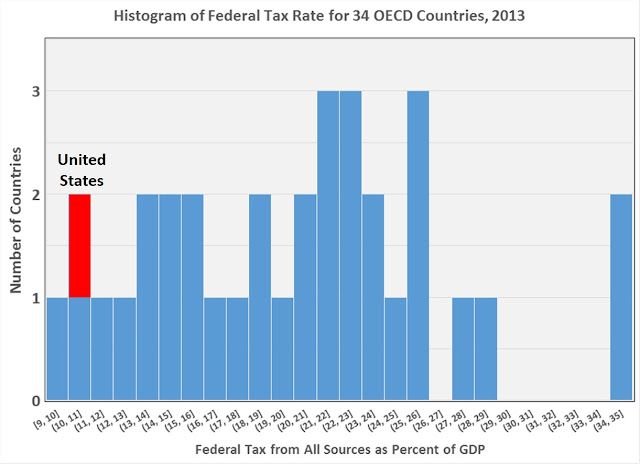 The US tax rate has been consistently among the lowest of the OECD for years.  The following chart shows federal taxes for all OECD countries from 2008 to 2013. 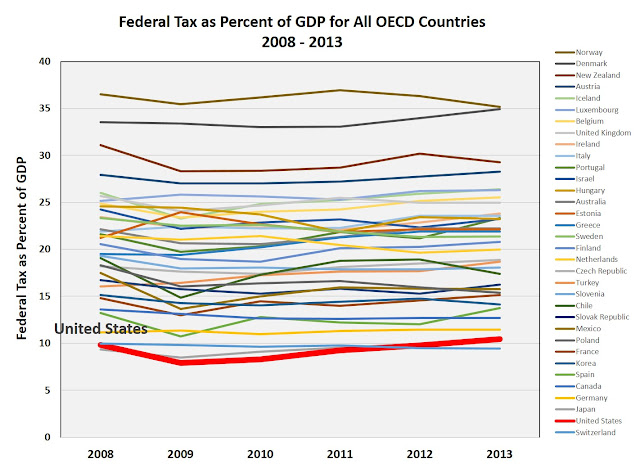 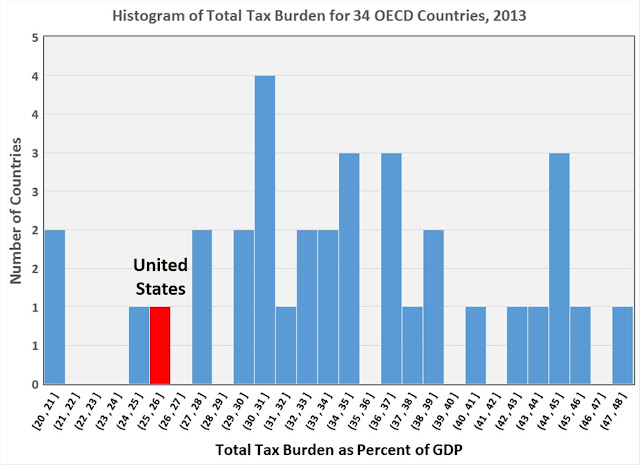 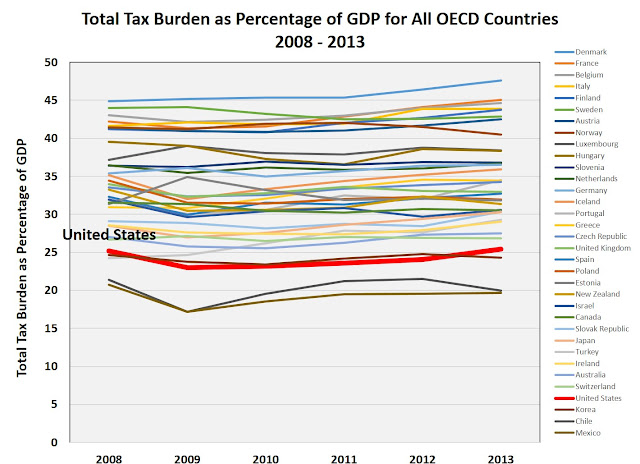 World Federal Tax Rate
The World Bank is an alternative source of tax data, including data from most nations on earth.   Only Federal or central authority tax data are available.  For the year 2011 (the recent year with the most complete reporting), the United States had the fourteenth-lowest Federal tax rate in the world.
The data is available for download on this site:  http://data.worldbank.org/indicator/GC.TAX.TOTL.GD.ZS 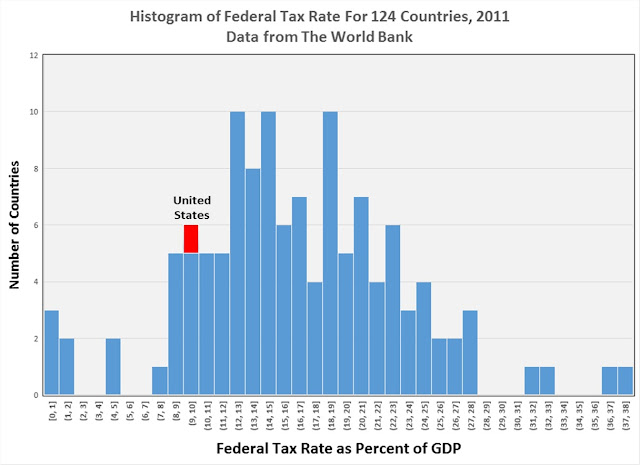 From 2009 through 2011, the United States had the lowest tax rate in the OECD, so no OECD countries appear in this list.

The time series data is a fairly messy chart, because of the number of countries included in the plot, but it is clear that the United States has consistently had among the lowest Federal tax rates in the world. 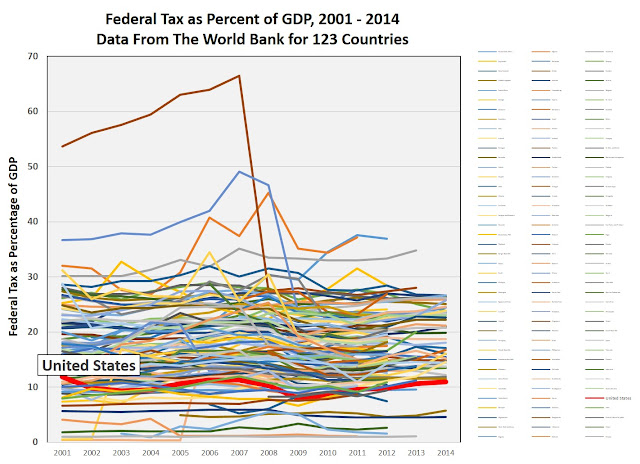 Federal Government Expenses
Taxation is one thing.  Government spending is another thing.  Data on Federal Government expenses are available from the World Bank.  As of 2011, the United States is eighth lowest of the 34 OECD countries in terms of Federal spending as a percentage of GDP. 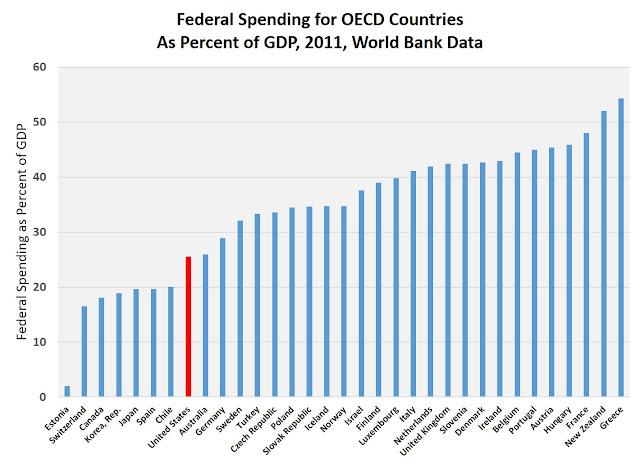 If we assume that all countries federal governments are performing equally relative to the size of their economies, then those with the highest expenses (Portugal, Austria, Hungary, New Zealand, Greece) would be the least efficient.  The countries with the lowest expenses (Switzerland, Canada, South Korea, Japan, Spain, Chile, United States) would be considered the most efficient.
But I think it can be argued that the United States’ federal government is doing more than many other governments in terms of infrastructure, scientific research, environmental protection, etc.  Further, as of 2013 the United States is spending more than the next nine countries combined, accounting for 40% of the world’s military spending.  Military spending consumes over 50% of the nation’s $1.1 trillion-dollar discretionary budget.  Considering the burden of military spending, it is apparent that the United States Federal Government performs the remaining functions of government very efficiently.

2)  The United States government does a lot of things that make its citizens safe, things that cannot be done by individual contributions.  These things cost money.  America would be a terrible country if the government stopped doing these things.

3) Over half of the discretionary budget goes to the military, leaving less than half to do everything else.  What the government does with the rest of the money is very efficient by comparison to other countries.

4)  We’ve had a 35-year experiment in systematic under-taxation.  Perhaps we’ve had more economic growth as a result.  Perhaps government is more efficient as a result.  But we are stealing from our children by continuing to run deficits.  It isn’t fair and it isn’t right.  We need to raise taxes and pay our bills.

5)  The tax revenue/GDP parameter is a way to measure fairness.  If an American is paying 10% of gross income in Federal tax (not including Social Security and Medicare payroll taxes), including all unrealized and deferred capital gains (401k, IRA), then they are pulling their weight.  But due to the complexity of the tax system, it is not clear who is pulling their weight and who is not, and there is a widespread perception that the system is unfair.

I think most Americans would agree that we should reform our tax system to make it simpler, more transparent, and give all taxpayers confidence that the system is fair.
----------
A version of this post also appears on the blog Debatably Political, located at this URL: