Oil imports, trade deficits, and the US international investment position

The consequence of importing oil at a rate of a billion dollars a day is that the net foreign investment position of the United States is steadily eroding.
----
Note: This post has been updated, as of February 28, 2012.
http://dougrobbins.blogspot.com/2012/02/oil-imports-trade-deficits-and-us.html
----
The US annual trade deficit has been growing since 1980, reaching about $750 billion a year in 2006.   The annual trade deficit diminished sharply in the 2009 recession to about $380 billion a year.  It's interesting to note that at a billion dollars a day, oil imports accounted essentially for the entire trade deficit during the recession. 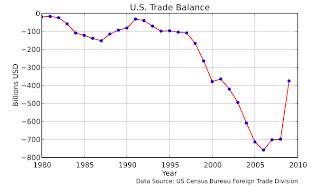 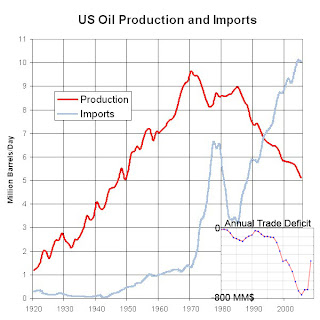 The accumulated trade deficit is reflected in the Net US International Investment Position.  Foreign ownership of US financial assets now greatly exceeds US ownership of overseas assets.  The first chart is taken from the US Bureau of Economic Analysis, and the second, from Wikipedia, shows the same data, but with a scale-bar showing percent of GDP. 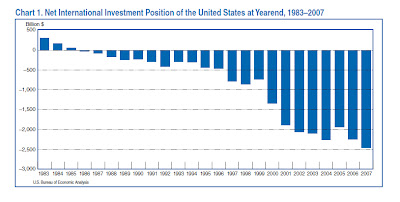 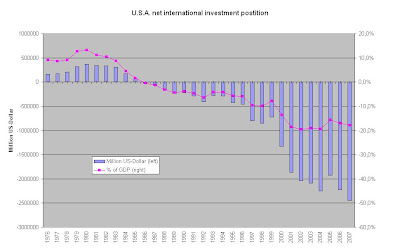 As foreign ownership of US financial assets grows, of course, the earnings from those assets also grow.
And earnings of American productivity then flow overseas, along with the dollars already flowing overseas for oil and foreign goods.  And there is no end in sight for the current dependence on foreign oil.
Posted by Doug Robbins at 7:04 PM 1 comment:

US Oil production and oil imports

As a sense of scale, consider that for the US population of 308 million, a billion dollars a day amounts to about $1200 per person annually, or $4800 annually for a family of four.  This is money simply removed from our economy, and not returned as paychecks, dividends or taxes. 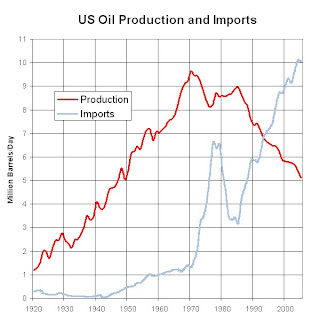 The figure is from Wikipedia; author David Moe, using data from the US Energy Information Agency.

If GDP is a function of oil consumption, as we saw in a previous post, what will happen if oil imports decline?
Posted by Doug Robbins at 6:47 PM No comments: