As I’m writing this post, Hurricane Ophelia is forecast to hit Ireland, the first full-strength hurricane to hit the island since 1961, and the tenth consecutive storm this season to reach hurricane strength.  The year 2017 has already been a tragic and record-setting Atlantic hurricane season.  Hurricane Harvey hit Texas as a 1000-year rainstorm, dropping about 11 cubic miles of rain on Houston with enough weight to depress the earth’s crust by a measured 2 centimeters.  And within a period of two weeks, Hurricanes Irma and Maria struck the Caribbean Islands as category 5 hurricanes – the strongest measure on the Saffir-Simpson scale, setting a record for the duration of category 5 storms in one season.

The obvious question is whether climate change is causing an increase in the frequency or intensity of these storms.
--
Hurricanes and Climate Change
A hurricane is a convection engine.  Warm tropical waters convey heat and humidity to the air over the water.  The warm, humid air is light, and begins to rise at random spots over the ocean.  The warm air cools as it rises, dropping below the dew point.  Water vapor condenses to form clouds and rain.  The condensation of water vapor reduces air pressure, further lowering the air density.  The low-pressure center draws warm air from the ocean surface toward itself, which feeds the rising convection column.

The converging air currents are affected by the Coriolis force, and begin to spin as they approach the growing low-pressure center.  As the storm develops structure, a downward current of air forms as the eye in the center of the storm, returning dry air from high altitude.  The hurricane eyewall of clouds, rain and ferocious winds spins around the central eye.  Surrounding the eye, spiral rain bands develop as subsidiary convection systems, with upward air flow in the rain bands and downward flow between those bands.

The strength of a hurricane is often limited by high-level winds blowing across the top of the hurricane.  Strong high-level winds effectively decapitate a hurricane by blowing the top off of the convection column.  Hurricanes tend to drift westward in equatorial waters, as the globe spins eastward beneath them; and to drift toward the poles in temperate latitudes.  Areas of surrounding high and low pressure form steering currents, which modify the path of the hurricane as it drifts across the globe. 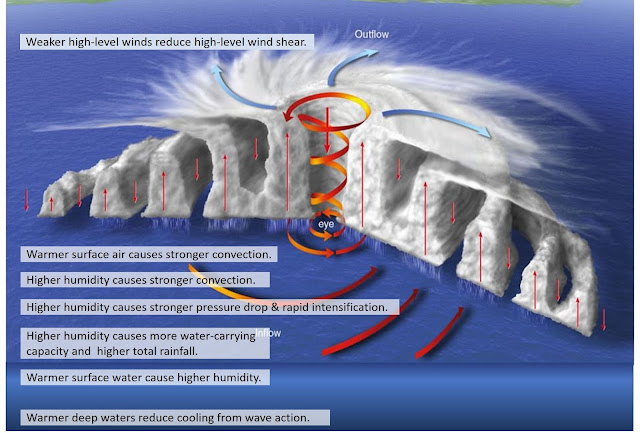 Temperature
1)  Average surface air temperature has risen around the globe by about one degree Celsius since 1980.  The particular warming is variable at different times and places, and may be greater over tropical waters at times.  Warmer surface air creates a greater tendency to form thermal convection currents. 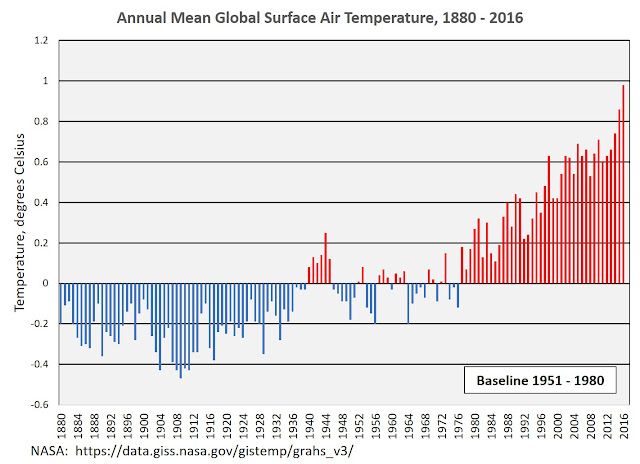 2)  Average temperature in the upper 100 meters of the ocean has risen by ½ degree Celsius since 1980.  As with air, temperatures in the ocean vary seasonally and in complex patterns of time and space.  At times, tropical waters will be warmer by more than the average ½ degree Celsius global average.  A warmer ocean surface contributes more heat and humidity to a hurricane. 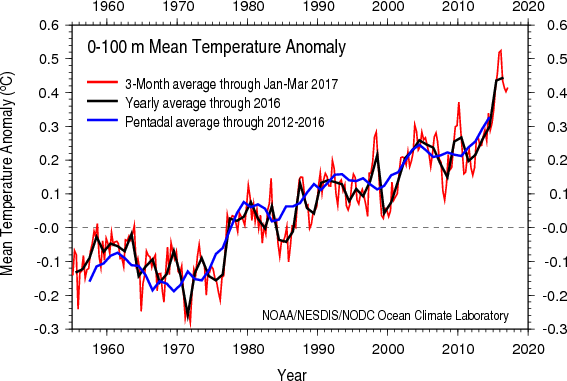 3)  The average temperature of the ocean water at depth has also risen.  The average temperature of waters from the surface to 700 meters has risen by 1/10 of a degree Celsius since 1980.  Waters from 100 to 200 meters have warmed nearly as much as surface waters.  Hurricane waves churn up deeper water, bringing cooler water to the surface.  In the past, this stirring of deeper water cooled the ocean surface, and acted as a buffer on the intensity of a hurricane.  But now that deeper waters are also warmer, there is less tendency for wave action to moderate the strength of a hurricane. 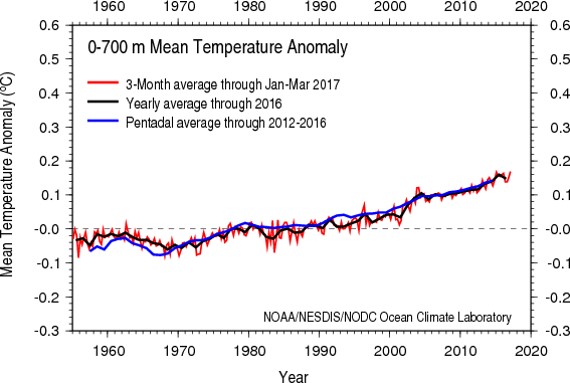 5) Air with higher humidity has more moisture to condense, causing a stronger drop in air pressure.  This can lead to stronger winds and more rapid intensification of a hurricane.

Quantification
I wrote to “Ask a Climate Scientist” on Facebook, and asked whether satellite data from NASA’s GOES satellites documented higher humidity over the Atlantic since the 1980s, either in actual hurricanes or in general background humidity.  I wanted to know if the data supported the idea that climate change is making hurricanes worse.  Here’s the answer I received:

"The GOES imager series involve technology upgrades and are not well calibrated, and so are not well suited for measuring changes in water vapour over time.
However, the HIRS instrument aboard the NOAA polar orbiter series which began about the same time is fairly well calibrated, and does show increases in humidity.
More recently the microwave radiometers on board the AMSU series of satellites also show the increases, as does the global radiosonde and surface-observing networks.  The increases are in line with expectations from thermodynamic principles (the Clausius-Clapeyron equation) and climate models.
We are pretty confident that these increases are indeed causing a storm to dump more rain now than it would have a few decades ago, all other things being equal.”
Professor Steve Sherwood, Climate Change Research Center, UNSW Australia

I made a brief attempt to quantify changes in the hurricane system in the Gulf of Mexico that are due to climate change.  Assuming a 1.5 degree rise in sea surface temperature, humidity will rise by about 5 percent, from about 75% relative humidity to 80%, at an average daily temperature of 80 degrees F.  Along with rising humidity, air temperatures have risen by about 2 degrees F (global average).  Air density will fall, but not very much, only about ½ of one percent.  This will result in stronger convective activity, but I do not have the knowledge or modeling ability to translate that change into hurricane intensity.

When water vapor in the air is converted to rain, air pressure drops.  Higher initial humidity will lower air pressure in the center of the hurricane.  This means stronger rotation and stronger winds.  Hurricanes are incredibly efficient at removing humidity from the air.  Almost all of the surface humidity in a hurricane is converted to rain, as convection drops the temperature of the air from 80 degrees Fahrenheit at the surface to minus 130 degrees F at the cloud tops.  But the initial saturation pressure of water in air is fairly small.  At 86 degrees F and 80 percent humidity, air contains only 3.3 percent water vapor.  Although climate change has raised the humidity by 5 percent, this means that the surface air in a hurricane now contains 3.5 percent water vapor.  When the vapor is converted to rain, the difference in air pressure is 0.2 percent.

So, temperature and humidity reduce the air density in a hurricane by 0.5%; additional rain reduces the air pressure by another 0.2 %, for a total climate-change reduction in air pressure of 0.7%.

Quantifying those changes is difficult.  Without sophisticated modeling, it is impossible to say whether the small changes in air density and water vapor can result in a major change to a storm system.  But it is important to note that hurricanes are feedback systems.  Hurricanes start as a mild swirl of air over the water, or a rain squall no different than any other rain squall.  But like the proverbial “butterfly effect”, a small change in the initial conditions of the hurricane may result in profound changes in the ultimate intensity of the storm.  Feedback mechanisms in the convection system create the hurricane; it would not be surprising if those same feedback mechanisms amplify the small changes due to climate change to create monster storms.

I am generally critical of strictly empirical reasoning in science.  Science is about providing explanations, identifying, observing and measuring processes which change the world.  But empirical evidence can support scientific reasoning, and give a clue that an explanation is on the right track.  Currently, the remarkable 2017 hurricane season is supporting the notion that Climate Change is producing stronger, more frequent storms, with more rapid intensification and heavier rain.
--
References:
http://cimss.ssec.wisc.edu/goes/blog/archives/13930
Temperature of cloud tops -90 degrees C.

https://en.wikipedia.org/wiki/Relative_humidity#/media/File:Relative_Humidity.png
Chart showing mass of water contained in air at 50% and 100% humidity, as a function of temperature.
Air with 80% humidity at 86 degrees Fahrenheit contains about 21 grams of water per kilogram of air.

https://www.wired.com/story/what-are-the-odds-of-a-super-storm-like-harvey/
Tells us there is a roughly 3 percent increase in average atmospheric moisture content for each 0.5 degrees Celsius of warming

https://en.wikipedia.org/wiki/Relative_humidity#/media/File:Relative_Humidity.png
Mass of water in air at 50% and 100% humidity, as a function of temperature.

http://www.engineeringtoolbox.com/relative-humidity-air-d_687.html
Partial pressure of water in saturated air, as a function of temperature.

Personal Communication from Profesoor Steve Sherwood, Climate Change Research Center, UNSW, Australia:
"The GOES imager series involve technology upgrades and are not well calibrated, and so are not well suited for measuring changes in water vapour over time.

However, the HIRS instrument aboard the NOAA polar orbiter series which began about the same time is fairly well calibrated, and does show increases in humidity.

More recently the microwave radiometers on board the AMSU series of satellites also show the increases, as does the global radiosonde and surface-observing networks.  The increases are in line with expectations from thermodynamic principles (the Clausius-Clapeyron equation, https://en.wikipedia.org/wiki/Clausius%E2%80%93Clapeyron_relation) and climate models.

We are pretty confident that these increases are indeed causing a storm to dump more rain now than it would have a few decades ago, all other things being equal."