Here is one of the most important graphs I’ve ever seen.  The slide was prepared by Dr. Charles Hall, of the , SUNY. 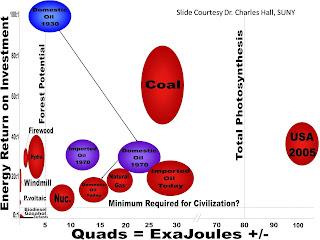 It’s a busy slide, so let’s spend a little time understanding what it says, before we decipher what it means.

EROI
Dr. Hall is a biologist by training, and a professor in the School of Ecology at SUNY.   His early research involved how trout must expend energy in order to eat (i.e., to obtain energy).   In different environments and by using different strategies, animals maximize their survival chances by maximizing their EROEI, their Energy Return On Energy Invested -- expending a minimum amount of energy to obtain a maximum amount of food.   Stated more simply as EROI, the equation is as follows:

If EROI is high, the animal is efficient in obtaining what it needs to survive.   If EROI is low, the animal is inefficient, and susceptible to harm in adverse circumstances.
By analogy, the same is true of societies.  By maximizing the efficiency with which we obtain energy, we have more time, capital, and energy available to produce food, build housing, and manufacture goods.  If we are inefficient in how we obtain energy, we have less time, capital, and energy available for those things.

Dr. Hall introduced the concept of EROI (Energy Return on Investment) into debates on Peak Oil and our energy future.  It concept is disarmingly simple:  Energy options can be ranked according to how much energy investment is required, in order to produce energy available to society.    The following chart shows a number of energy sources, ranging from hydroelectric, which returns about 100-fold energy to society for the energy invested, to corn ethanol and biodiesel, which essentially are break-even propositions, consuming as much energy as they produce. 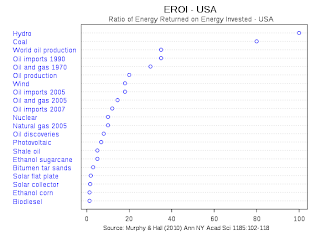 High numbers are highly efficient: in the 1930’s, spending one barrel of oil (energy equivalent) to drill an oil well returned the investment 100-fold.  That’s why oil millionaires (e.g. Jed Clampett, Fred Astaire’s “Daddy Long-legs”, J.R. Ewing, and real millionaires, such as the Hunt and Koch brothers) became part of our folk culture.  However, exploration maturity and the law of diminishing returns nibbled away at the excess return.   By the 1970’s, domestic oil had about 30-fold return on investment, and currently, the number is less than 10.  (Keep in mind that there are other financial costs; this is just the return of energy produced compared to energy invested.)
On Dr. Hall’s chart, the vertical axis is EROI.  This represents the efficiency of a particular enterprise in returning energy to society, compared to the energy consumed in the process.  The horizontal axis represents the volume consumed in the economy.   The entire uses about 100 Quads (quadrillion BTUs).    Note that coal represents about 30% of our current energy budget (about half of our electrical generation), and is very efficient in terms of EROI.  This cheap energy produces economic benefits throughout the economy, but with corresponding environmental costs, including those related to mining, air quality, and CO2 emissions. 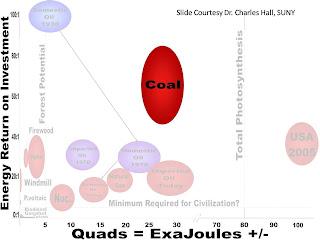 Let’s look at how different energy sources appear on the chart, through some of our history.   First, domestic oil in 1930 yielded about 100-fold return on energy invested: for every barrel-equivalent of energy used to drill a well, the well would produce 100 barrels.   Domestic oil production produced about 5 quads annually. 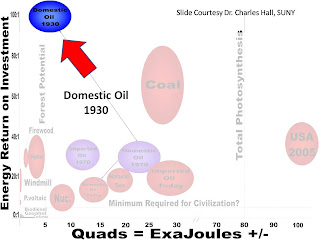 By 1970 (US peak oil) production had increased to about 22 quads annually, but efficiency had fallen.  The EROI for domestic oil was about 30-fold.
By 2010, production rates had fallen to about 12 quads, and EROI had fallen to 10-fold. 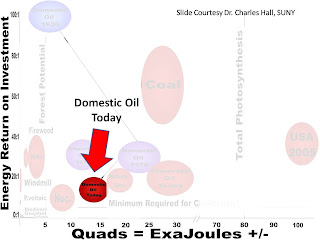 New oil, and future oil from current exploration, will be located in very deep water, in the , or extracted with difficulty from low-quality shale reservoirs.  New and future oil is expected to have an EROI of about 3 to 5, which Dr. Hall considers to be the minimum required to sustain civilization (Dr. A.S. Hall, 2010 Complex Systems Lecture, UAA).

Renewable Energy
Now suppose that we want to replace our fossil fuel consumption with renewable energy.    Evidence for climate change is overwhelming, and there is scientific consensus that CO2 emissions from fossil fuels is the cause.
But currently, Wind energy produces less than one quad of our 100 Quad total demand .   Solar produces less than 1/10 of one Quad.  Despite huge rates of growth, these renewable will not soon make a significant contribution to our energy mix. 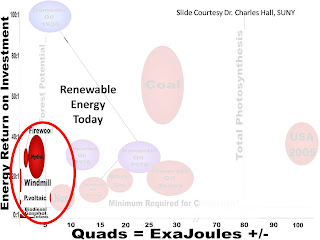 Further, there are likely to be significant limits or barriers to the growth of renewable energy.  For example, electrical system instability limits the use of wind power to about 20% of capacity of installed power, on a name-plate basis (Paul Morgan, electrical engineer with GVEA, personal communication).   And since even the best wind sites have about a 30% capacity factor (annual utilization), the limit of wind energy in a particular system is about 6% .  The availability and cost of rare-earth elements is likely to be another limit to growth, for both Wind and Solar energy.   It’s interesting to note that there are about of rare-earth elements in every large wind turbine.


Biofuels deserve special mention. Ethanol production from corn is supported by Federal subsidies, with are estimated to have cost $17 Billion from 2007 to 2010, and will cost $53 Billion by 2015, if the subsidies and mandated volumes are not repealed earlier.  In theory, corn ethanol contributes to American energy independence and reduces carbon emissions.   But, does it really?  Estimates for the EROI of corn ethanol are very weak, ranging from a maximum of 1.6 to a minimum of 0.9.   (Dr. Hall comments "....as compared to real fuels, which have EROI of 30 or 40).  If we assume the mean, about 1.35, it means that 135 gallons of fuel must be produced in order to deliver 35 gallons of fuel to society.  And in doing so, producing corn ethanol removes food from global markets, raising food prices in a hungry world; consumes large amounts of water; causes soil erosion and degradation of water runoff.  Corn ethanol is an inefficient fuel, and supporting corn ethanol is bad public policy.

So here is the dilemma, graphically.   How do we move renewable energy from the lower left-hand corner of Dr. Hall’s chart, to the far right? 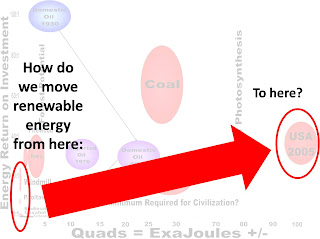 The short answer is: We can’t.  Or as Dr. Hall puts it:  At the present time, there is no renewable energy solution that is efficient, scalable, and timely.

Any alternative to oil and coal must be Efficient, Scalable, and Timely.  1)  Alternatives must have a high EROI.   This is really easy to recognize, because energy is a large component in every investment dollar.   Phrased another way, alternative energy must be substantially profitable, without subsidy.   2)  Alternative energy must be scalable, in order to provide meaningful contribution to total energy supply.   3)Alternative Energy must be Timely.  It must be possible to implement the alternative before serious economic contraction begins, reducing the capital available to build the alternative.
So to make the required reductions in CO2 emissions, and provide a significant amount of power from renewable sources, we have to move the goalposts. 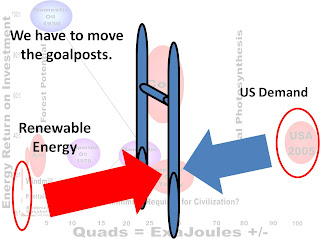 Large-scale conservation is essential.
We can start by driving smaller cars.    (Amory Levins, Winning the Oil Endgame http://www.oilendgame.com/)  Redesigning our cities to favor carpools, changing our lighting, and other steps can reduce our energy consumption.    But even with the most dramatic conservation measures imaginable, fossil fuels will be a necessary part of our fuel supply for a long time to come.

Conventional Fuel Supply
EROI  has implications for conventional fuel supply, as well.  As old oil fields are depleted, exploration and technology bring new supplies to the market.   For the last 2 decades, and for the foreseeable future, new oil supplies will come from deep water, in various parts of the world, from the , and from low-quality unconventional reservoirs, which can be produced by new production technology.    However, all of the new sources of oil have lower EROI than conventional sources.

This brings up something that I call the Economist’s Fallacy.    Standard economic theory assumes that as price rises, additional production will become commercially viable, increasing supply. 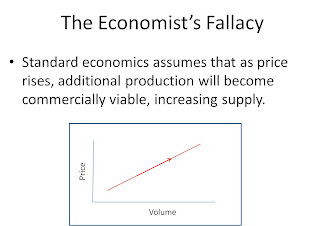 So if oil can be extracted from oil at $150 per barrel, at today’s prices, economists assume that expanded supply will become available when oil prices rise to that level. 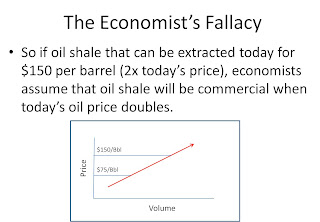 However, the cost of extraction will rise as the price rises, because energy is a large component of the cost required to extract the oil.    If something requires more energy to extract than it yields, it will not be commercial at any price! 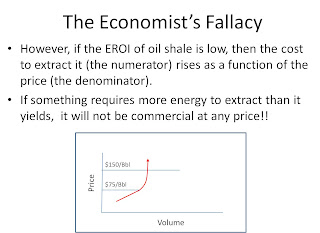 Major sources of new oil are approaching EROI of 3 to 5, which is the minimum needed to justify production.  Oil which is more remote (e.g. the Kara Sea, the Chukchi Sea, or deepwater subsalt offshore Brazil) will have even lower EROI, and may not be viable at any price.  More energy is required to extract each barrel of oil, consuming what might have been available for other purposes in the economy.   This progression, requiring disproportionately more energy to produce more energy, may become a factor which will exacerbate Global Peak Oil.