Global atmospheric CO2 is rising due to our use of fossil fuels.  This is the inescapable conclusion from freely available scientific data.   See my previous post on modeling global CO2 cycles:
http://dougrobbins.blogspot.com/2012/04/modeling-global-co2-cycles.html

The future of CO2 emissions and the consequent rise in atmospheric CO2  is the topic of this post.


History of CO2 Emissions
A study of fossil-fuel emissions was recently published by the CDIAC (Carbon Dioxide Information Analysis Center) – T.A. Boden, G. Marland, and R.J. Andres, 2013, Global, Regional, and National Fossil-Fuel CO2 Emissions, providing estimates of carbon dioxide emissions from 1751 – 2009.   To this data series, I added  estimates of future global carbon dioxide emissions for the years 2010 to 2040, published by the EIA (Energy Information Agency).  The figures presented are the EIA Reference Case, which is the base case of their forecast.  I extrapolated emissions from cement manufacture using a constant ratio to the fossil-fuel emissions, and eliminated emissions by flaring.

Here are the charts. 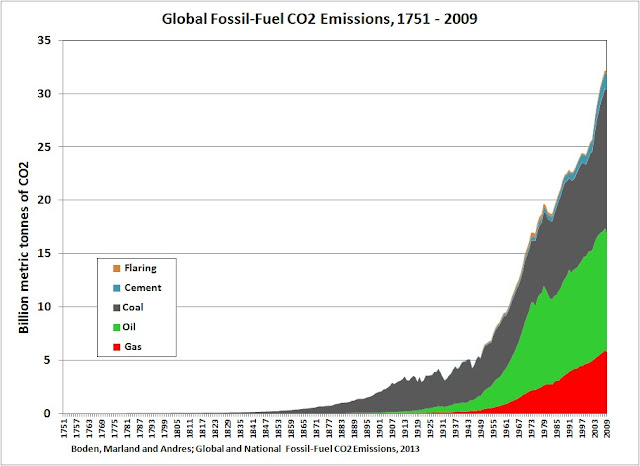 CO2 Emissions from 1751 to 2009.
The long-term chart follows the familiar exponential trend, first identified by M. King Hubbard in his landmark paper on peak oil in 1956. 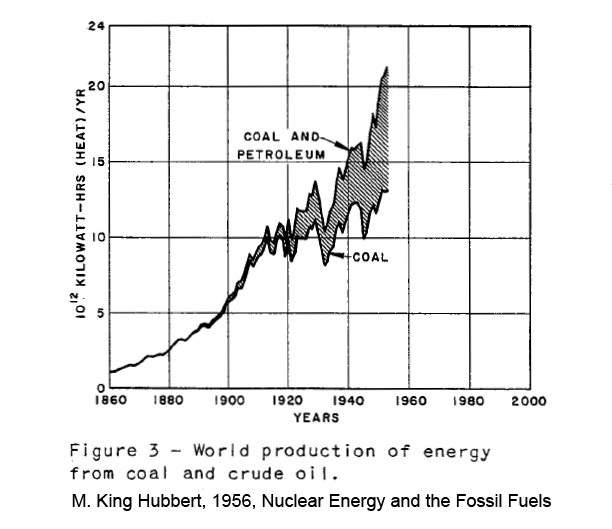 The graph from 1900 to 2009 shows greater detail through the past century. 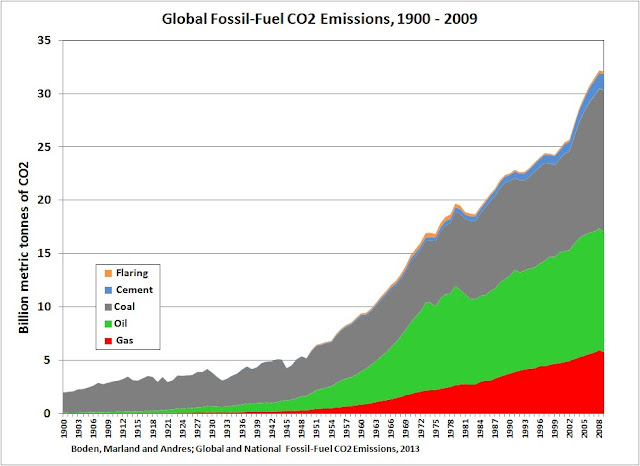 
Future CO2 Emissions
To the data series published by CDIAC, I added estimates for future global carbon dioxide emissions.   The U.S. Energy Information Agency (EIA) published projections of CO2 emissions for the years 2010 to 2040. The figures presented are the EIA Reference Case, which is the base case of their forecast (cases were also presented for high and low oil prices).  The charts show EIA estimates for various sources of emissions.  For consistency with the CDIAC data, I extrapolated emissions from cement manufacture using a constant ratio to the fossil-fuel emissions, and eliminated emissions by flaring. 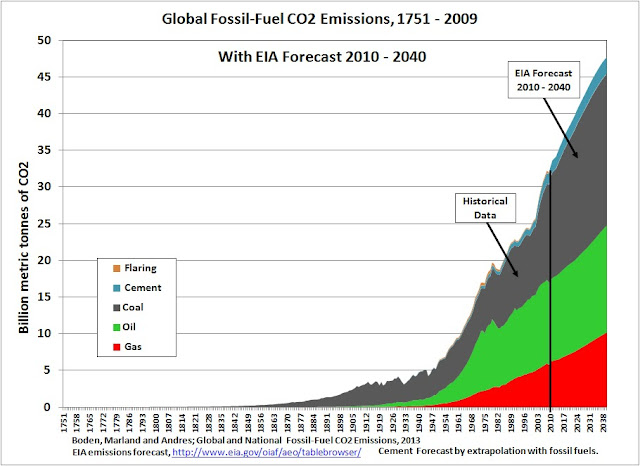 CO2 Emissions History and Forecast, 1751 - 2040
In the EIA base case projection to 2040, the exponential increase of CO2 emissions is moderated, but CO2 emissions continue to increase. 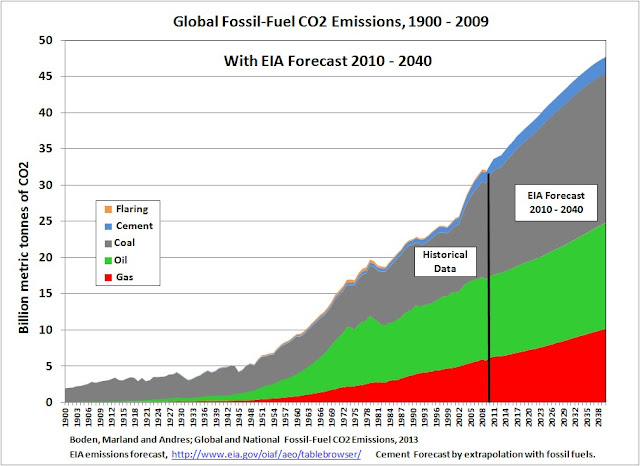 International Action to Reduce Fossil-Fuel CO2 Emissions
The rise of atmospheric CO2 was long suspected, but first documented in 1960 by Charles Keeling.   As evidence of global warming accumulated, a number of international conferences and treaties called for stabilizing or reducing CO2 emissions.  Beginning in 1988, The Intergovernmental Panel on Climate Change was formed.  A conference in Toronto during the same year recommended that by 2005, industrialized countries should reduce carbon emissions to 80% of the emissions levels of 1988.  Subsequent efforts include the UN Framework Convention on Climate Change (1992), the Kyoto Protocol of 1997, etc. 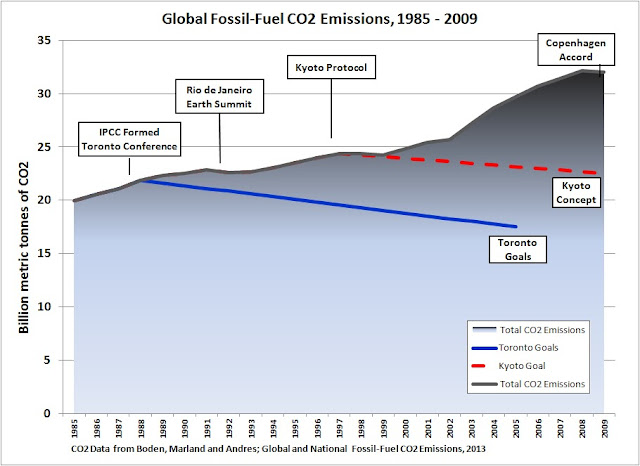 In concept, the Kyoto protocol calls for stabilizing global CO2 emissions at the 1990 level.   However, the Kyoto Protocol is a complex agreement, and actually only governs about one-quarter of the world’s carbon emissions as of 2010.  The United States never ratified the agreement.  Many other countries have no binding targets in the first period.   Japan and Russia, which observed binding targets in the first period, have declined to accept new targets in the second period.  Carbon Dioxide emissions for countries participating in the Kyoto Protocol actually fell 12% below 1990 levels by 2010.   But despite years of conferences and treaties, global CO2 emissions have continued to rise, and according to projections by the EIA, will continue to rise.

Historic CO2 levels are shown as a global average using a one-year rolling average from CO2 monitoring stations located from northern Canada to the South Pole.  Forecast CO2 concentrations were calculated according to the EIA forecast of CO2 emissions to 2040.  The chart of CO2 emissions and atmospheric CO2 is cumulative rather than annual, and is smoother than the charts of annual CO2 emissions.   Global average CO2 concentration is forecast to reach 450 ppm by the year 2032, and to reach 481 ppm by the end of the forecast period in 2040. 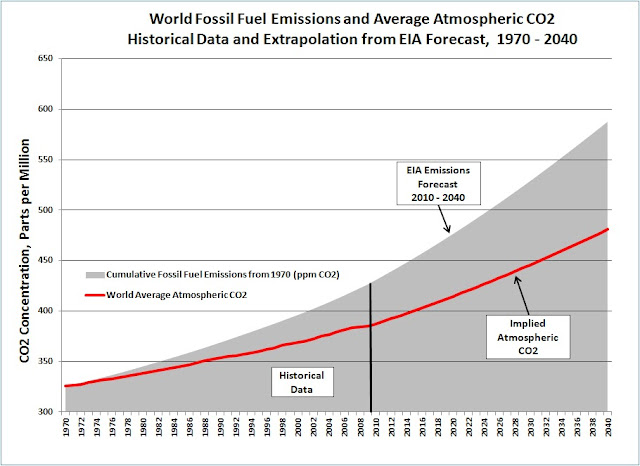 The larger question is how humanity will deal with global warming which will result from higher concentrations of atmospheric carbon dioxide.  Strategies for coping include preventing the rise of atmospheric CO2; mitigating the effects of high CO2, or adapting to a warmer world.   A clear understanding of where we stand on these issues should help focus resources on the best solutions.
-----------------
References:
T.A. Boden, G. Marland, and R.J. Andres, 2013, Global, Regional, and National Fossil-Fuel CO2 Emissions,  Carbon Dioxide Information Analysis Center

Institute for Energy Research; 2011 article and forecast.  In all cases, renewable energy represents only 14% to 17% of total energy supply.