Hadley Cells, the Global Distribution of Deserts, and Climate Change

As a child, did you ever spin a globe as fast as possible, until all boundaries and outlines disappeared into a blur of color?   Do you remember what it looked like?

I’m talking about a physiographic globe, with grasslands and forests shown in shades of green, and deserts in a sandy yellow.  Did you notice, as the globe turned, that the deserts line up?   Spin the globe fast enough, and the yellow band across North Africa merges with Saudi Arabia and blends into the deserts of India, and after a pause, appears again as a yellow swath across Mexico.  In the Southern Hemisphere another yellow band appears, showing the deserts of Australia, Chile, and Namibia in a yellow blur.  The two bands are symmetrically equidistant from the equator.

The deserts on earth are arranged by latitude, for good reason.   There is a tropical convection cell in the atmosphere, known as the Hadley cell, or Hadley circulation.  Warm air rises near the equator, spreads laterally, becomes cool and falls at around 30 degrees latitude, north and south.  As the warm air rises at the equator, it cools, dropping its moisture as rain.  Tropical rainforests are the result, circling the globe near the equator.   The air moves north and south to about 30 degrees of latitude and falls.  As the high-altitude cool air becomes warmer in the lower atmosphere, its relative humidity falls.  The descending air-mass is dry, and deserts circle the globe between 25 degrees and 30 degrees of latitude.

The rising and falling air, driven by the earth’s tropical heat engine and modified by the Coriolis effect, accounts for many of the wind patterns on earth.  The trade winds and the subtropical jet stream are due to Hadley circulation. 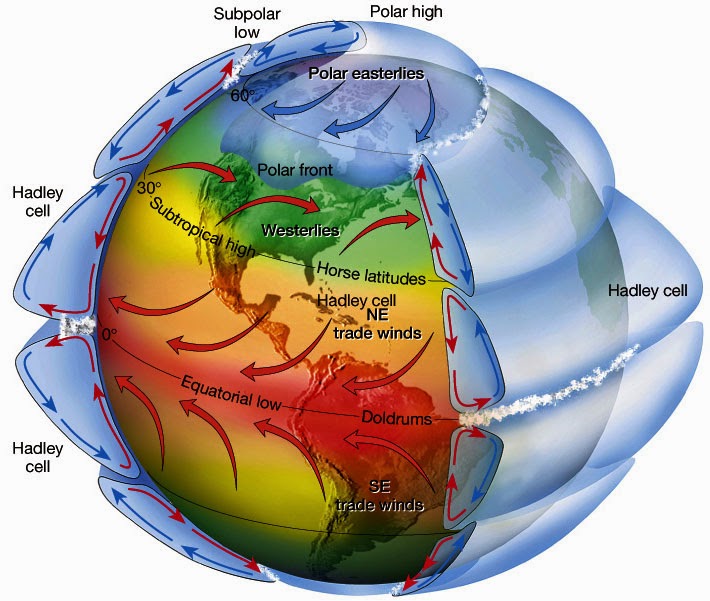 Of course, like all weather systems, Hadley cells are complex, and they are not the only variables determining climate in the low latitudes.  Air circulation patterns are modified by the distribution of land and oceans, mountains and ocean currents.  The Hadley cells themselves show seasonal, inter-annual, and decadal variation.  But the basic model is simple.  Hadley circulation is a major factor in determining whether land is moist, hospitable and productive, or dry, hostile and barren.

As greenhouse gases accumulate in the Earth’s atmosphere, more heat will be retained in equatorial regions, and tropical convection is expected to become stronger.  Modeling shows that the Hadley cell will become larger.  The region of falling, dry air is expected to move northward, driven by more vigorous convection currents in the tropics.   Observations confirm this expectation; studies indicate that the Hadley cell has expanded by 2 degrees to 5 degrees of latitude (140 to 340 miles).  The change is more than can be attributed to natural variability and the rate of change is faster than predicted by modeling.
The consequences of expanding Hadley circulation may be severe, particularly for the United States.   Climate forecasts for the years 2080 – 99 predict drought conditions in summer months over almost the entire country. 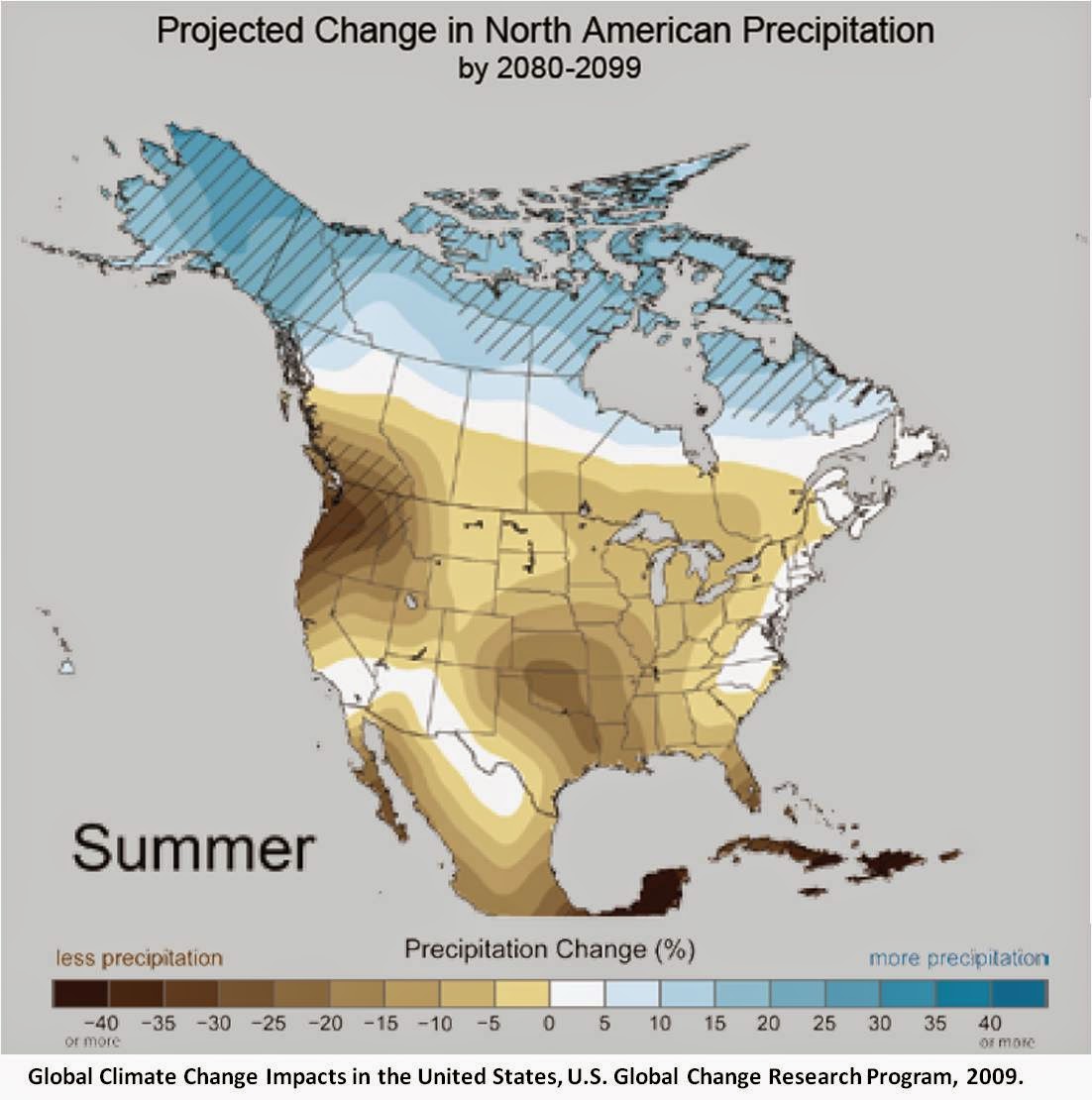 In recent years, the American Southwest has already experienced severe drought, in a pattern that is disturbingly similar to the forecasts for the end of the century.   The following figures are the US drought monitor published by US department of agriculture in 2013 and 2014.  Drought has been persistent in the American Southwest since 2007. 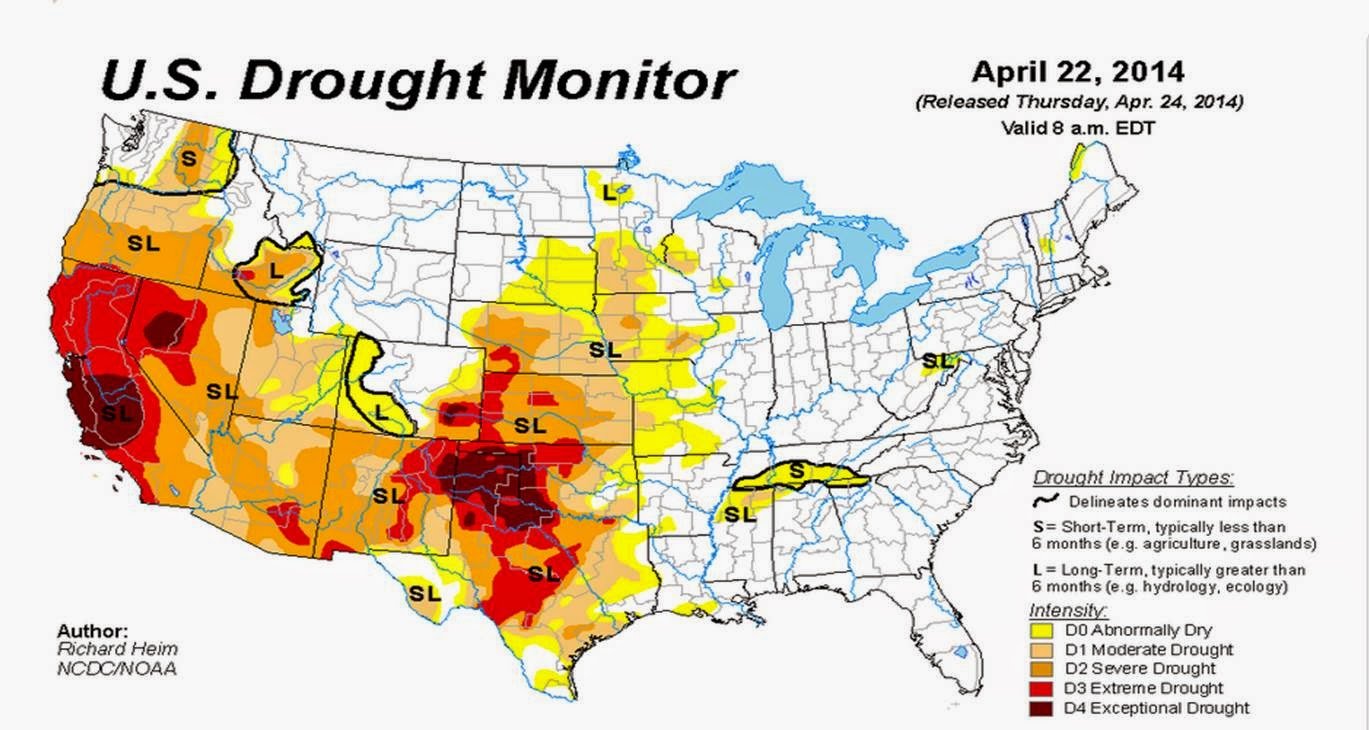 In 2011, Texas experienced a severe drought that left insufficient grass in the entire state to support the population of horses.   The year was the driest on record.   Many horse owners, unable to afford the high cost of hay imported from other states, abandoned their horses, or put them down.  If I recall correctly, about 100,000 horses perished, about 1/10 of Texas' population of 1,000,000 horses.  Agriculture losses in Texas in 2011 were estimated at $5 billion, with indirect costs of another $3.5 billion.   The US Forest Service estimated that between 100 million and 500 million trees died due to the 2011 drought.
Agriculture is simply not able to adapt to the combination of pervasive drought and high temperatures.  We are dependent on agriculture to sustain our population, and agriculture depends upon rain.   In 2011, drought left insufficient fodder to feed the population of horses in Texas, and as a consequence, many horses died.  What will happen in the United States by the end of the century, if drought leaves insufficient food to feed our people?

I just read that the region around Sao Paulo, Brazil, recently suffered the driest rainy season in 84 years.   Sao Paulo is located at 23.4 degrees South Latitude, so this event is not correlated to expansion of the Hadley Cell, but might reflect a strengthening of the dry circulation.   The water reservoir which provides nearly 50% of the city's water is at only 11% of its normal capacity, and another reservoir which provides 20% of the city's water is at only 35% of capacity.  Conservation measures are in effect, but if drought becomes pervasive, in this place or any populated place, the consequences will be severe for the people living there.

The atmosphere observatory on Kermadec Islands, Pacific Ocean, is located at South Latitude 29.20.   The observatory is on the southern cusp of the Hadley Cell.  The CO2 seasonal cycle is much noisier than most other CO2 observations around the globe.  Natural variations in air circulation produce variable mixing of the Northern and Southern cycles, resulting in the noisy curve. 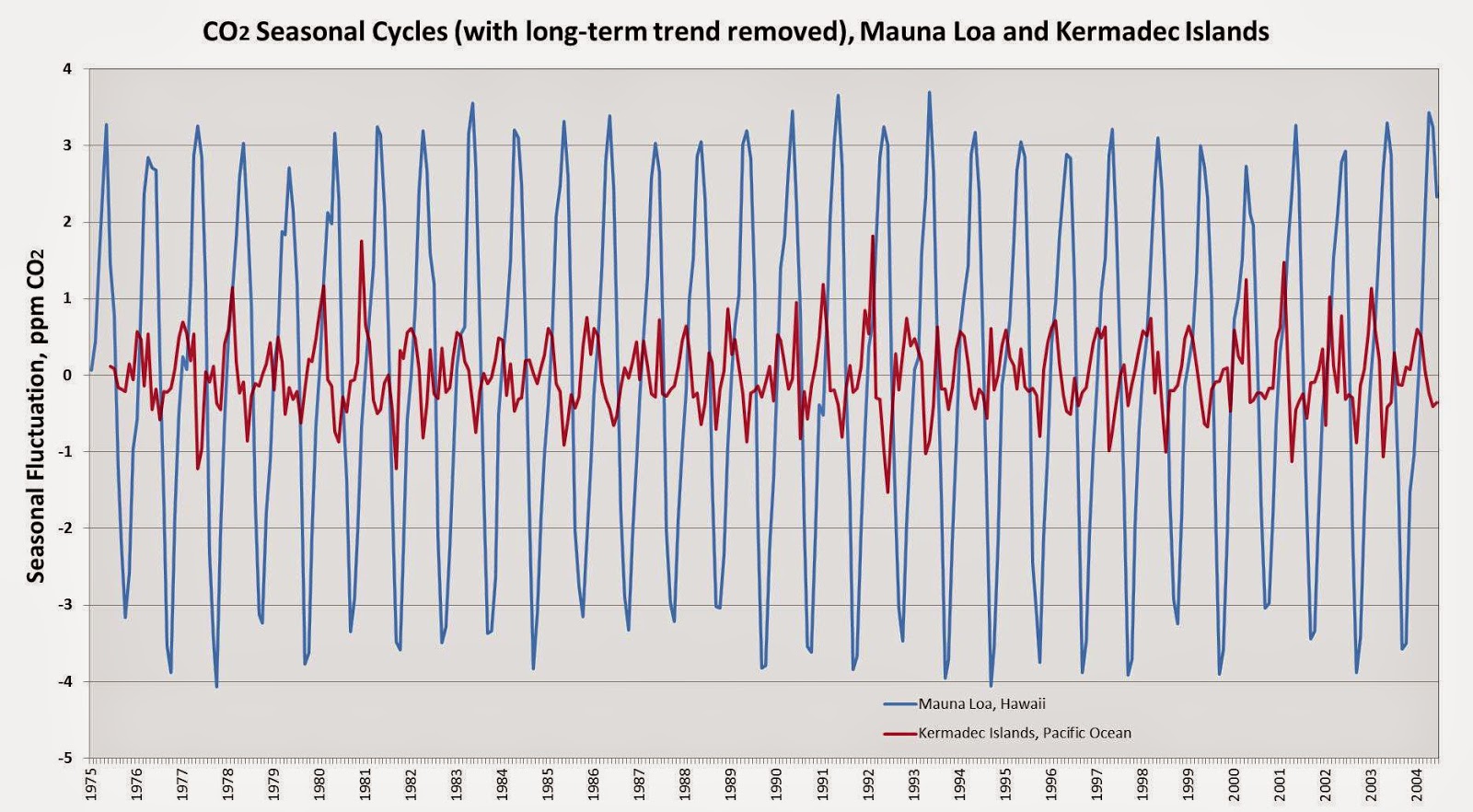 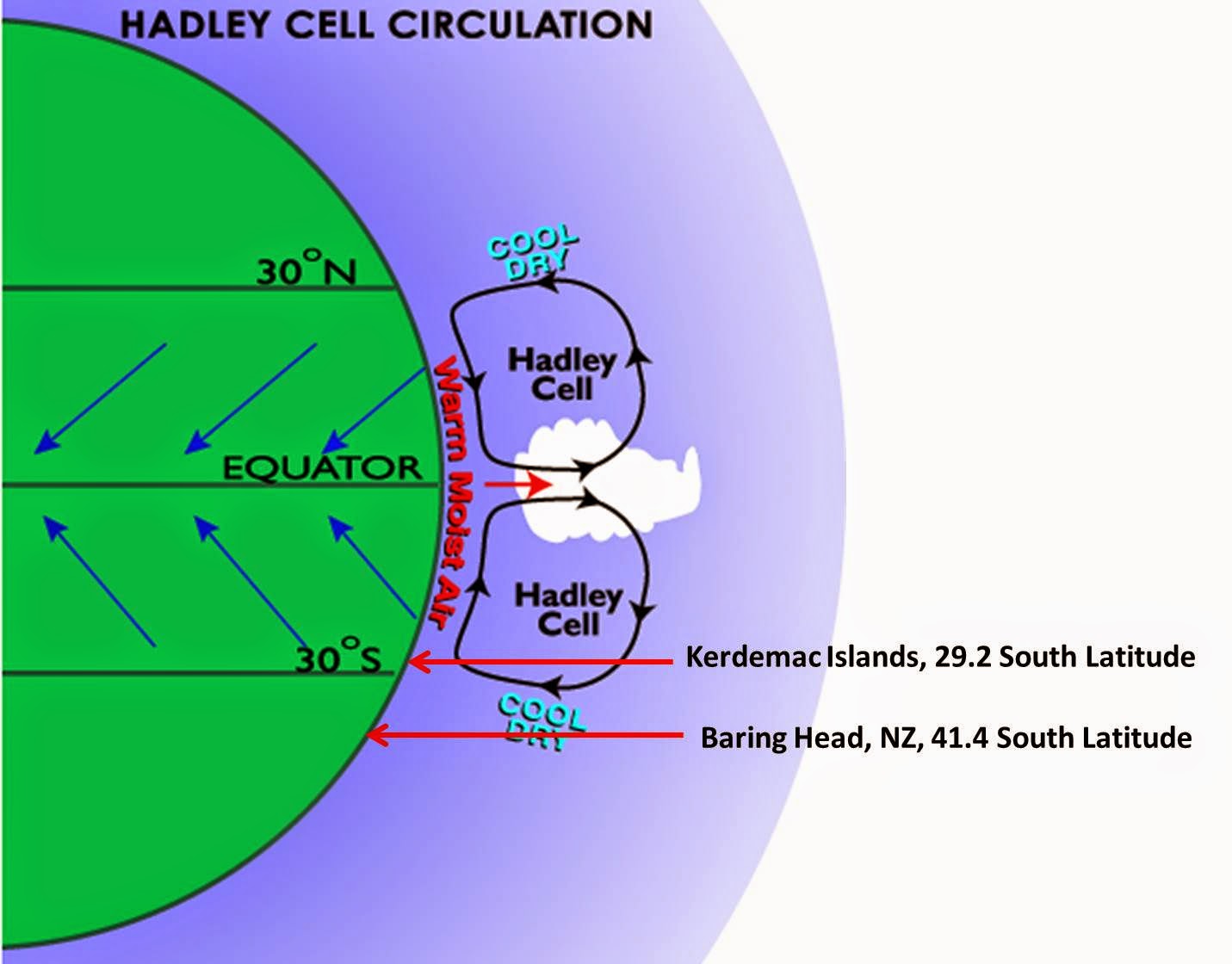 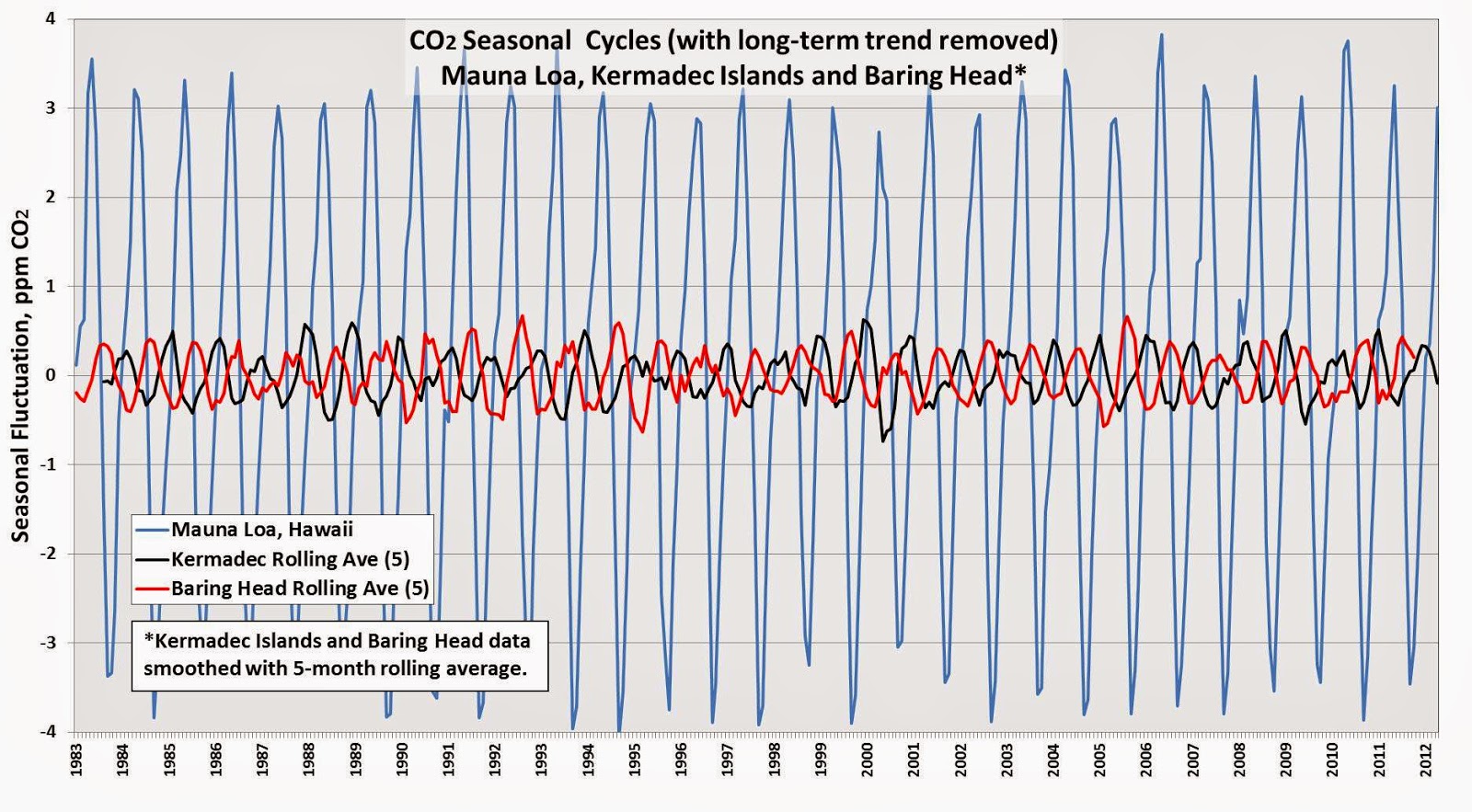 It occurs to me that a group of CO2 observatories should be established between 30 degrees and 40 degrees South Latitude.  Continuous observations of CO2 concentration and isotopic composition would reveal the boundary of the Hadley Cell.  Over time, these observations might detect air from the Northern Hemisphere, and indicated by the Northern Hemisphere seasonal CO2 cycle.  Such observations could be useful in measuring and documenting the progress of one of the most serious threats due to climate change.
Posted by Doug Robbins at 12:28 AM 3 comments: