Methane hydrate is a naturally occurring, unconventional source of natural gas.   Large volumes of potential gas resources exist in hydrate deposits in some deep-sea and arctic environments, but at the present time, technology for commercial production of methane hydrates does not exist. 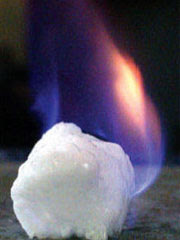 Methane hydrate is a solid, crystalline form of methane and water, similar in appearance to ice.    Gas hydrates (also known as gas clathrates) are generally stable at temperatures below 40 degrees Fahrenheit and pressures higher than 1000 psi.  Hydrates are a familiar nuisance to petroleum engineers.   Hydrates will form in cold production flowlines, wherever temperature and pressure is conducive for the formation of hydrates.  Hydrates create flow obstructions or ice plugs; glycol anti-freeze is commonly injected for flow assurance.

Gas hydrates, due to their solid, crystalline form, are very dense, concentrated forms of methane.   Gas hydrates contain 165 times more methane by volume than natural gas at surface pressure.  The volume of gas resource trapped in hydrates is large, but uncertain.

Natural deposits of hydrates occur wherever natural gas and water meet at appropriate temperature and pressure.  This generally happens in deep water and within a few thousand feet of the surface in arctic environments.  Hydrates are found in the deepwater Gulf of Mexico, on the Blake Ridge offshore North Carolina, offshore West Africa, in the Sea of Japan, and in a variety of arctic petroleum basins, including the Alaskan North Slope.

Japan is preparing to test an experimental offshore hydrate production well, using a production process tested in Canada in 2008 (Petroleum News, February 17, 2013).  Proposed production rates are minimal and only intended to demonstrate the technology.

Commercial production of gas hydrates was reported some years ago in a gas field in the Russian far north (IHS Energy).  Wells produce free gas from a reservoir below a gas hydrate cap.  As pressure in the reservoir declines, methane is released from the hydrates.   Gas recovery volumes are reported to indicate a contribution from the hydrate cap, but documentation is not available.

The majority of known gas hydrate occurrences are in the deep ocean.  There, pressures and temperatures are favorable to the formation of hydrates.  Many gas hydrate sites are known from direct sampling at the sea-floor, or in shallow cores.  Hydrate sites are especially well-known in the Gulf of Mexico, where they occur over methane and petroleum seeps.  These seeps often occur in association with oil fields at depth, so they have necessarily been studied thoroughly in the course of exploration and development of oil fields in the Gulf of Mexico.  Chemosynthetic biological communities also frequently occur at petroleum seeps, and require surveys and protection from disturbance due to oil drilling.

Gas hydrates are also known from seismic studies indicating the existence of hydrates.  The typical seismic indication is that of a “bottom-simulating reflector”, i.e., a seismic reflection parallel to the sea-floor, but not in conformance with the layering of the stratigraphy.   The bottom-simulating reflector represents the phase change from gas hydrate to water and gas, due to increasing temperature with depth.  The density change at the phase boundary is sufficient to cause an acoustic reflection.

Gas hydrates in the deep marine environment may serve as a seal for trapping oil and gas, or enhance the sealing capacity of an existing seal.   Such a trap might provide prospective potential very near the sea-floor.   On Blake Ridge offshore North Carolina, seismic studies indicate the likelihood of free gas below the gas hydrate, on a diapiric structure.  The gas hydrates near the sea floor probably enhanced the trapping characteristics of the diapir. 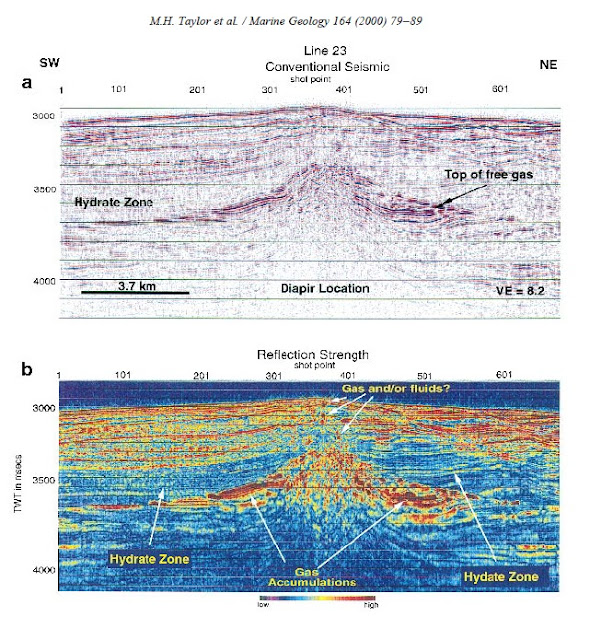 Gas Hydrates and Glaciation
The stability field of gas hydrates (low temperature, high-pressure) suggests an interesting possibility during recent geologic history.  Conditions favorable for the formation of hydrates must exist at the base of thick glacial ice.  During ice-age glaciation, conditions favorable for the formation of hydrates existed over large areas covered by continental ice sheets.  Where ice sheets covered gas-prone sedimentary basins, it seems inevitable that substantial volumes of hydrates would accumulate under the glacial ice. 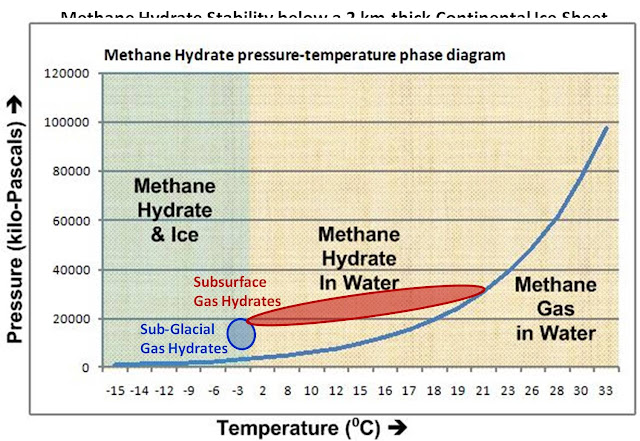 Figure 3.   Methane Hydrate Stability Fields below glacial ice.    Gas hydrates will persist in the subsurface to a depth of about one kilometer below the ice.

Methane gas is normally produced in sedimentary basins, from both thermal alteration or biodegradation of organic matter (principally woody vegetation).   Methane rising naturally to the ground surface would be converted to gas hydrate near the base of the glacier.  Hydrates would accumulate over gas seeps throughout the period of the ice age, and would subsequently melt during deglaciation due to pressure release. 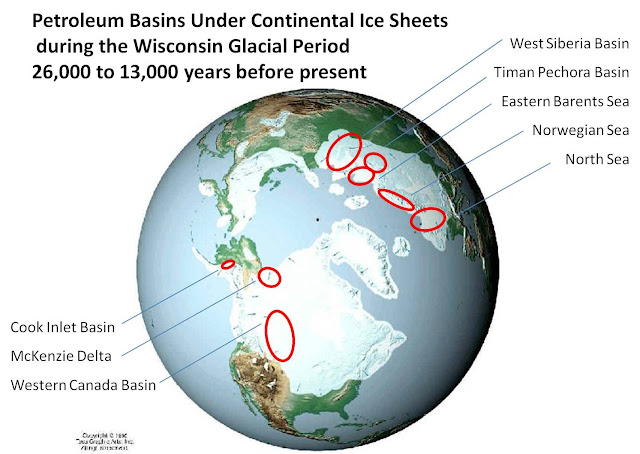 Figure 4.   Petroleum Basin under continental ice sheets during the most recent glaciation.

Scientists exploring the sub-glacial lake Vostok in Antarctica expect gas hydrates to occur in or under the lake, due to the cold temperatures and high pressures present under four kilometers of ice.  Lake Vostok, a crescent-shaped rift lake, is a likely environment for the existence of petroleum source rock and thermally generated methane.   [Schematic diagrams showing hydrates invariably show the bulk of the hydrates at the bottom of the lake, for unknown reasons.  The bulk of the gas hydrate should be expected to be methane hydrate, which is lighter than water, and will rise to the top of the lake, at the base of the glacier. 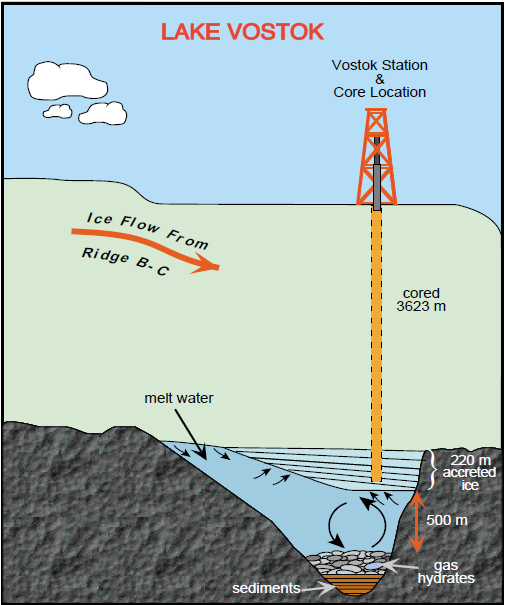 During the most recent glacial period (about 100,000 years ago to 10,000 years ago), continental ice sheets covered a number of sedimentary petroleum basins, which were actively generating methane.  Where ice sheets covered these basins, gas hydrates would have been created.  When the ice melted, the gas hydrates would have disappeared; more from the loss of pressure than the change in temperature.   It is interesting to look at gas fields on the Alaska’s Kenai Peninsula, which may carry remnant signs of the former existence of hydrates.   Gas fields in this basin are often marked by low ground and wetlands immediately overlying the field (an observation pointed out to me by geologist Matt McCullough); and fields are marked by strong “gas chimney” seismic effects, due to large amounts of irreducible methane trapped in near-surface sediments.  Both of these features may reflect the previous existence of methane hydrates over the field. 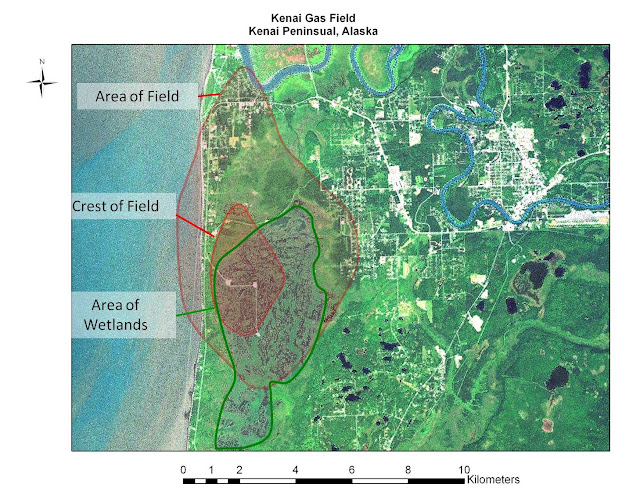 Risks of Gas Hydrate Production
Production of gas hydrate deposits carries the risk of depressurization and uncontrolled release of methane.  Once gas is released, it reduces the pressure on the hydrate reservoir, in a process similar to a geyser or a well blowout.   Such a depressurization, once initiated, might be impossible to stop.    Craters on the Blake Ridge indicate that a depressurization event occurred in the distant past, possibly releasing a volume of methane capable of affecting the global climate.
---------
References:

Posted by Doug Robbins at 3:33 AM No comments: