September 2017 has been an active and violent hurricane season in the Atlantic tropical zone.  Most of this post was written following Hurricane Harvey, and before Hurricanes Irma and Maria.  Hurricane Harvey dumped record-setting volumes of rain on the south Texas coast.  Hurricanes Irma and Maria, occurring in a two-week period, were the strongest hurricanes on record in the open Atlantic Ocean.  For many years, researchers have warned that climate change would produce stronger hurricanes -- it seems that the future has arrived.

In the simplest analysis, I would ask the following question.  Is it more likely that Hurricane Harvey was a completely natural, unlikely event with a probability of 1:1000, or is it more likely that the storm was made worse by climate change, according to well-understood physical principles and predicted by scientists for over two decades? 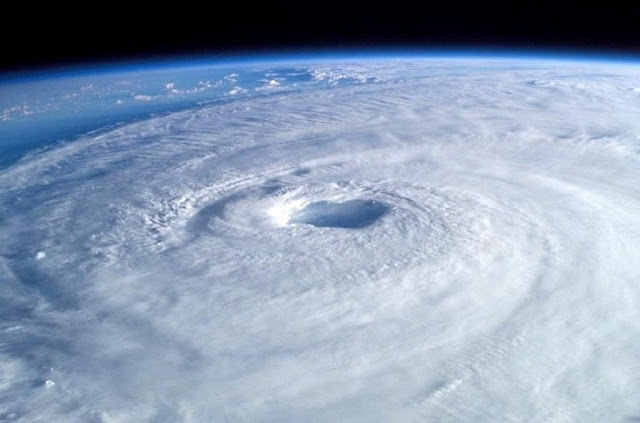 ------
In August 2017, Houston Texas became the face of climate change.   More than 20 inches of rain fell over an area of 28,949 square miles; > 30 inches over 11,492 square miles; and > 40 inches over 3643 square miles.  The maximum rainfall of 52 inches broke the record for rainfall from a single storm in the contiguous United States.  The intensely flooded area received 11 ½ cubic miles of water.  Within a few days, over 300,000 people had already filed claims for federal disaster assistance, and many more are likely to require assistance in the future.  The immediate death toll from the storm was 82, and illnesses relating to the storm are expected to persist for years. 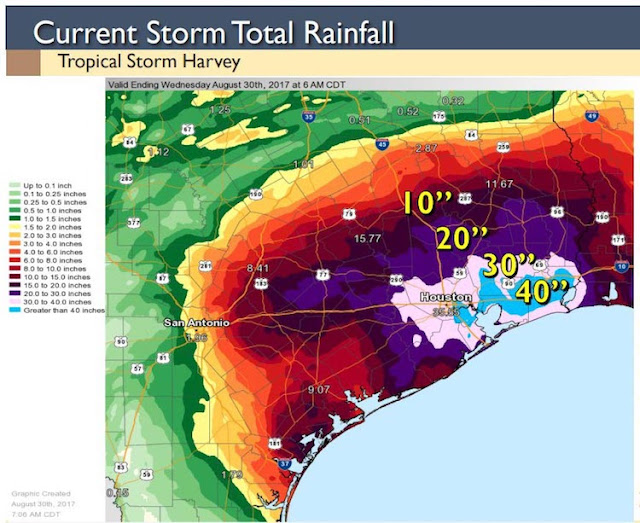 Climate change is often represented in terms of polar bear on melting ice; of changing migration patterns for wildlife; of seemingly trivial changes in long-term average temperatures; of higher sea level in the next century.  All of those are true and real.  But for many Americans, these issues do not impact their lives.  None of this matters in terms of day-to-day living.

Hurricane Harvey is different.  It has been called a 1000-year flood by scientists.  This is an expression of the probability of an event of this magnitude in a given year, based on statistics of smaller events.  The storm dropped an awe-inspiring quantity of water on the earth, and America’s fourth-largest city was totally disrupted.  There was certainly no economic productivity from the city for a week, and the damages are considerable.  When floodwaters threatened to destroy Houston's earthen flood-control dams, emergency managers opened the floodgates, deliberately flooding neighborhoods downstream of the dams, to save other neighborhoods in a kind of triage.  An estimated 100,000 homes were flooded or damaged by the storm.  Many of them will be totally destroyed after sitting in flood waters for a month.  The human toll in lives and economic loss is huge.

The damage is personal to me; two of my three former houses in Houston almost certainly flooded. Old friends and former neighbors are dealing with the loss of their homes, cars, and lifelong possessions. A number of deaths occurred in familiar neighborhoods 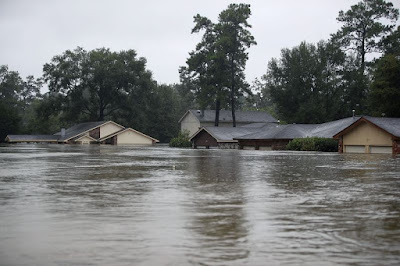 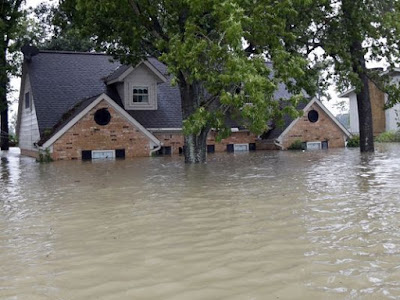 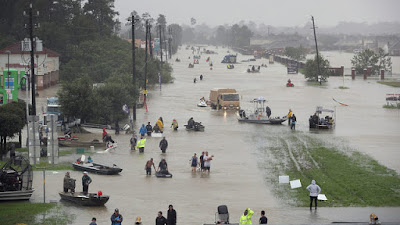 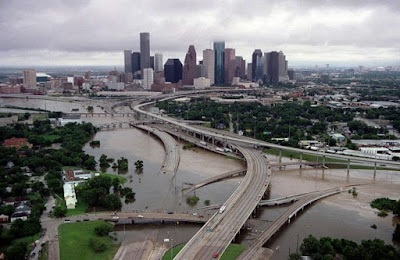 The Intergovernmental Panel on Climate Change (IPCC) 2014 Report includes this statement: “It is very likely that heat waves will occur more often and last longer, and that extreme precipitation events will become more intense and frequent in many regions.”

On August 27, 2017, the National Weather Service tweeted this statement regarding Hurricane Harvey: “This event is unprecedented & all impacts are unknown & beyond anything experienced. Follow orders from officials to ensure safety.  #Harvey”.   [Emphasis mine.]

These statements are not unrelated.

Scientific Analysis
The full scientific analysis of Hurricane Harvey will not be known for a long time, probably years.  And uncertainties will remain after the full analysis of all available data.  There are a number of known factors relating to climate change which will increase hurricane severity – it is simply physics.  These factors include higher temperatures at the ocean surface, higher temperatures in the upper 200 meters of the ocean, and higher humidity.  The factors are well-established -- the changing temperature of ocean waters have been observed by NOAA’s ARGO system of buoys since 2004, and by satellite since the 1980s.  Some scientists have also suggested that climate change is reducing the strength of upper level winds, though this proposal is not yet considered proved.

Higher temperatures at the ocean surface are believed to have caused a rapid, late intensification of the storm from category 2 to category 4 immediately before landfall.

Higher temperatures in the water column are believed to have reduced the tendency of wave action to bring cooler water to the surface, weakening the hurricane.

At this time, it is unknown how much wind systems have changed due to climate change, or how much these changes might have affected Hurricane Harvey.  Hurricane Harvey stalled after moving onshore, caught between stationary high-pressure systems.   High-level winds, which sometimes reduce convection through wind shear, were also weak through the hurricane.  Quantifying these impacts using new observations and modeling is the job ahead for scientists.

The specific magnitude of these changes is unknown, but the known factors contributing to the severity of the hurricane are clear.  According to one preliminary estimate, factors relating to climate change increased the volume of rainfall from Hurricane Harvey by 30%.   While this may seem to be only a moderate increment, thirty percent of extra water is what exceeded the capacity of flood-control reservoirs, caused neighborhoods to flood, and caused a number of deaths.

Conclusion
The earliest warning that climate change could result in more frequent and severe hurricanes was published in 1992, and incorporated into the IPCC Second Assessment Report.  At that time, there was sparse statistical evidence that hurricanes were becoming worse.  In 2017, statistical evidence is still weak.  However, science is not all about empiricism.  Explanations matter.  We understand the physical processes of hurricane convection, the Coriolis effect, and the importance of water temperature, air temperature, humidity and air density.  We have observed that these factors are changing due to accumulating greenhouse heat, and will increase the frequency and intensity of hurricanes.

At this time, we do not know the specific amount that climate change contributed to the Hurricane Harvey disaster.  But there is a simple, shortcut analysis that we can do now.  Simply consider which possibility is more likely: whether Hurricane Harvey was an extreme event with a probability of 1:1000, or whether climate change intensified an ordinary storm, as predicted by scientists for over twenty years? 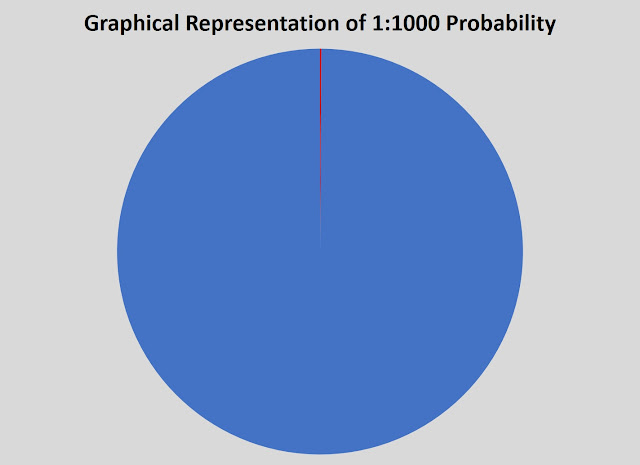 https://www.wired.com/story/what-are-the-odds-of-a-super-storm-like-harvey/
Long-term temperature is about one degree higher than a few decades ago.    Local conditions were 2.7 degrees to 7.2 degrees F higher than usual.   Humidity rises at about 3 percent per degree C., so humidity during Harvey was 3% to 5% higher than usual.
High level winds that typically steer tropical storms collapsed in 2010.  Although a meteorologist expects the winds to return in a few years, long-term climate modeling suggests that collapse of steering currents may become more common.

http://www.npr.org/sections/thetwo-way/2017/08/28/546748502/how-a-warmer-climate-helped-shape-harvey
Immediately prior to landfall, and during the time of intensification to category 4, Harvey over water 4 degrees F warmer than average.

https://cleantechnica.com/2017/08/28/85-degree-water-warmer-normal-air-contributed-hurricane-harvey-strength/
Waters off South Texas were 5 degrees warmer than usual during Hurricane Harvey.

http://www.sciencemag.org/news/2017/08/human-influence-may-prolong-ocean-cycle-gave-birth-harvey
Atlantic Decadal Oscillation is trending to cooler temperatures, which may bring cooler waters to the tropics and weaken storms in coming years.   Another researcher suggests that GHG warming may keep the ADO positive for the coming decade.

https://www.theverge.com/2017/8/25/16207190/hurricane-harvey-category-four-intensity-warm-water-gulf
Background conditions were about 2 degrees warmer than average, and then warmed further by an eddy of the Gulf Stream Loop Current.

https://www.theatlantic.com/science/archive/2017/08/did-climate-change-intensify-hurricane-harvey/538158/
“The human contribution can be up to 30 percent or so of the total rainfall coming out of the storm”.  Hurricane waves usually bring cooler water to the surface, which acts as a buffer to moderate the strength of the storm.  But Hurricane Harvey churned up water 100 m to 200 m below the ocean surface, but this water was still warm.


Immediate death toll from Hurricane Harvey was 82.  A number of serious health effects could persist for years.

https://www.c2es.org/publications/extreme-weather-and-climate-change
Daniel Huber, Jay Gulledge, Center for Climate and Energy Solutions, Extreme Weather and Climate Change, 2011.
“There is a physical basis for expecting hurricanes to have stronger winds and produce more rainfall due to global warming, and models with enhanced greenhouse gas levels show an increase in the number of such storms….However, observational evidence is insufficient to confirm that such a response has already begun.”

http://www.ipcc.ch/ipccreports/sar/wg_II/ipcc_sar_wg_II_full_report.pdf
IPCC Second Assessment Report, 1995.
"Direct impacts on infrastructure would most likely occur as a result of changes in the frequency and intensity of extreme events. These include coastal storm surges, floods and landslides induced by local downpours, windstorms, rapid snowmelt, tropical cyclones and hurricanes, and forest and brush fires made possible in part by more intense or lengthier droughts."
“It is presently uncertain whether the frequency and severity of tropical cyclones will increase due to climate change.”