The Silly Season and the US Federal Budget

We are now in the silly season of American presidential politics.
Both parties have nominated their candidates for president, written their platforms, held their conventions, made endless pleas for donations to run political advertisement.  Heeding the advice of Quintus Cicero*, they have distorted and disparaged the record of their opponents, avoided clear discussion of the issues, promised everything to everybody, and lied liberally about everything. 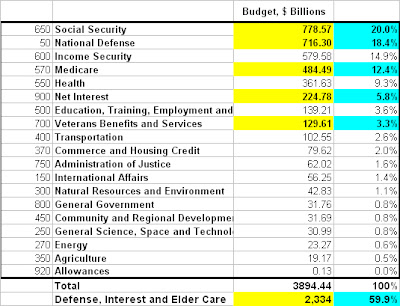 Social Security and Medicare represent about 32% of total Federal spending.  Defense and Veteran’s benefits are about 22%.  Interest on existing debt is 6%.  Together, these items are about 15.5% of GDP.

The total Federal deficit for 2012 is about 1.3 trillion dollars.  Federal spending exceeds tax revenue by an astonishing 51%.

Federal debt held by investors (“public debt”) is now about $11 trillion dollars, or about 72% percent of GDP.   Public debt is growing at a rate of about 20 percent per year, a rate that would double the debt in 3 ½ years.  Foreign investors hold $5.3 trillion, or nearly half of the public debt.   Obligations between government agencies, such as the social security trust fund, amount to an additional $4.7 trillion, bringing total Federal debt to $16 trillion (107% of GDP).

Against this backdrop, Republicans propose an amendment to the constitution requiring a balanced budget.  Mitt Romney proposes to cut marginal tax rates by 20 percent.  He also proposes raising Defense spending by about 5% (excluding war expenses), adding 100,000 members of the military, modernizing weapons, and building more ships and aircraft.   He said that budgetary changes will not affect current retirees or veterans.

Defense, Social Security, Medicare, and Interest are about 60 percent of Federal spending.  If all tax revenues were applied to these categories with no reductions and a balanced budget, as proposed by Republicans, it would eliminate 83% of all other government functions.  This is without even considering the proposed tax cut.

We cannot eliminate 7/8ths of the functions of the Federal government to pay for defense, medical subsides and transfer payments to the elderly.   It is absurd.

Democrats have been equally negligent in providing a clear blueprint toward solution of the crisis.
Both sides are simply promising everything to everybody.

It is clear that any solution to the budget crisis will require a combination of increased taxes, cuts to defense spending, and reductions in elder care.  And these changes must be implemented sooner rather than later.

Posted by Doug Robbins at 5:18 PM No comments: