Gas production from conventional reservoirs has been falling since 1973, exactly as predicted by M.K.Hubbert in his landmark “Peak Oil” paper published in 1956.   Offshore natural gas production (1970–2000) moderated the decline but did not reverse the trend.

Unconventional gas reservoirs (“tight” sands and coal-bed methane) began to contribute significant production about 1980.   Significant volumes of shale gas production began in the early 2000s, and grew from 2 TCF in 2008 to over 4 TCF/year in 2010.   Some of the production growth was the result of the “land-rush” of lease acquisition.  Leasing terms often required immediate drilling to maintain the lease.  Many wells were drilled simply to satisfy leasing terms, without regard for the primary economics of the project. This created a supply bubble, driving prices below equilibrium for profitability. 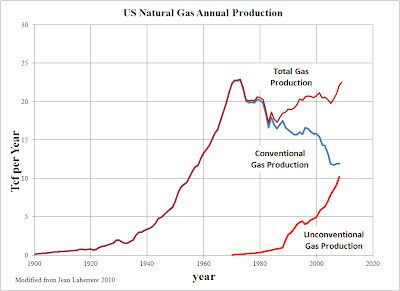 The contribution of shale gas helped to push total gas production to about 25 TCF per year, well above the Hubbert Peak of 1973 (22.7 TCF/year).  (Note: EIA gas production volumes are somewhat higher than data from Jean Laherrier; probably due to different handling of volumes re-injected for gas storage and oil recovery.   EIA gives current production over 27 TCF per year.)

Production from unconventional sources is simply the continuation of the long-term trend of diminishing returns in producing oil and gas.  Technology and economics allow profitable production of low-productivity wells, and many more wells are needed to supply the market. 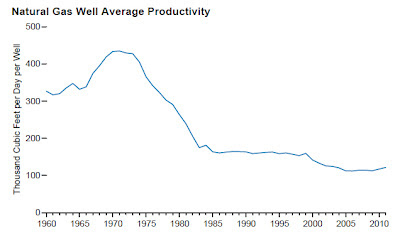 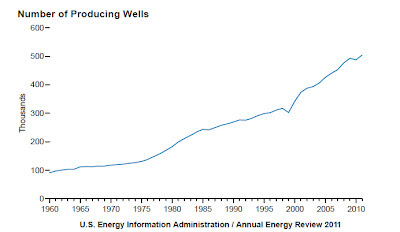 The growth in supply caused a decline in average well-head prices from over $8 per mcf (thousand cubic feet)  to about $2.50 per mcf.   Current prices have recovered somewhat to about $3.00 per mcf.

The shale gas revolution is the product of two technologies.  The first is horizontal drilling, which was developed in the1980s, and the second was the ability to controllably fracture the rock surrounding the horizontal wellbore, which was developed in the early 2000s.   Hydrofracturing a well to stimulate production is an old technology, widely used since the 1970’s.   The innovation that allows commercial production of shale gas is technology to distribute the fractures evenly along the entire length of the wellbore.  Previously, fracturing only occurred at the weakest point, leaving 90% of the horizontal wellbore unproductive.

The new technology opened up huge prospective areas in the United States.   Initial estimates of total potential were staggering.  In 2010, estimates from the EIA for technically recoverable resource from lower 48 shales were over 800 TCF (trillion cubic feet).  Of that volume, the EIA attributed 410 TCF to the Marcellus shale of the Appalachian states. 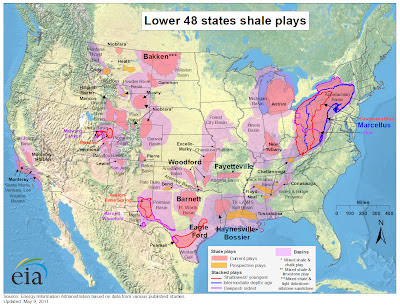 By 2011, however, some of the bloom was off the rose.  Every exploration play tends to go through phases.  It is almost a law of nature that the best wells are drilled first.   Geologists drill prospects with the best potential before drilling average prospects.   Predictably, engineers, management and financial analysts extrapolate the results of those early wells to the entire field or play.  No one pays attention to the warnings of the geologist until the disappointing wells are drilled.

Disappointing results from shale gas began to be documented in the financial media in 2011.
http://www.nytimes.com/2011/06/26/us/26gas.html?pagewanted=1&sq=marcellus&st=cse&scp=12

In 2012, two major studies by the USGS reduced expectations for shale gas.
First, the USGS published the technically recoverable resources from the Marcellus shale, with a mean estimate of 84 TCF.   This was an increase from the estimate of 2 TCF published by the USGS in 2002, but substantially below the 410 TCF published by the EIA.  (This compares to about 22 TCF consumed annually in the United States.)  Conflict between the two agencies is almost palpable in the USGS press release, which noted testily:  “USGS is the only provider of publicly available estimates of undiscovered technically recoverable oil and gas resources of onshore lands and offshore state waters.”

Secondly, the USGS published a study of well productivity across all of the shale gas plays in the United States.  The USGS estimated the average EUR (Estimated Ultimate Recovery) per shale gas well at 1.1 BCF/well, substantially less than major operators, who published estimates of 4 to 5 BCF/well.

The major operators (e.g. Chesapeake) are probably doing better than average.   The leading companies are using the technology appropriately and have come up the learning curve on drilling and producing these wells.  By contrast, many of the inexperienced competitors who jumped into this play lack the engineering expertise to perform well.   The USGS “average” reflects the experience of both groups.  Still, the USGS numbers are sobering, and suggest that a slow-down in the growth of production is likely, until the issues of productivity are clearly settled. 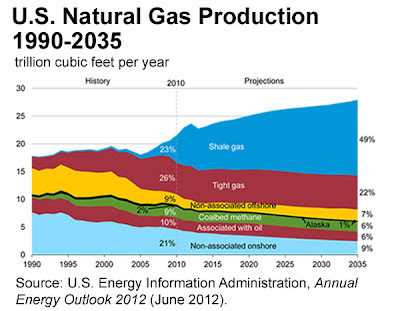 The low gas prices that have hovered at or below $3/mcf have depressed exploration for gas in both conventional and unconventional plays.   Anecdotally, drillers in the Gulf of Mexico have stopped pursuing new gas, both in deep plays on the continental shelf and prospects in deep water.   Offshore gas is simply not profitable at $3/mcf.   However, I expect the current high production rates to keep prices in the range of $3 to $4 for one or two years, until excess production and excess gas in storage is depleted.   In a longer range outlook, I expect gas prices to rise to the $5 to $6 range in the medium term of 3 to 5 years.

The energy equivalence of a unit of gas (mcf) to a barrel of oil is about 6 to 1.   In other words, 6 thousand cubic feet (mcf) of gas produces about 6 million Btu (British Thermal Units) of energy, which is roughly equivalent to the energy content of a barrel of oil.  By comparison to oil, energy from gas is incredibly cheap.  At today’s prices ($3.51/mcf gas, and $91.58/barrel oil), natural gas is only 23% of the cost of oil.  Natural gas prices could double, triple or quadruple and still represent a savings with respect to a barrel of oil.