Ukraine – A Nation on the Edge, Update #2 – Differing Perspectives from East and West

The crisis in Ukraine has been the subject of two previous posts on this blog.

Fifty years ago, as an eight-year old playing with older boys, I learned the name "Ukraine" in a board game called "Risk".  It was a war game, and the goal was global domination by building military empires.  The most important place on the map was Eastern Europe, stretching from the Barents Sea to the Middle East.   This large block, half the size of a continent, controlled the expansion of empires from east or west.  That crucial geopolitical place, the key to success in this boys' game, was given a single name: Ukraine.  (Strangely, the name of Russia did not exist on the map; perhaps this was some artifact of the cold war. 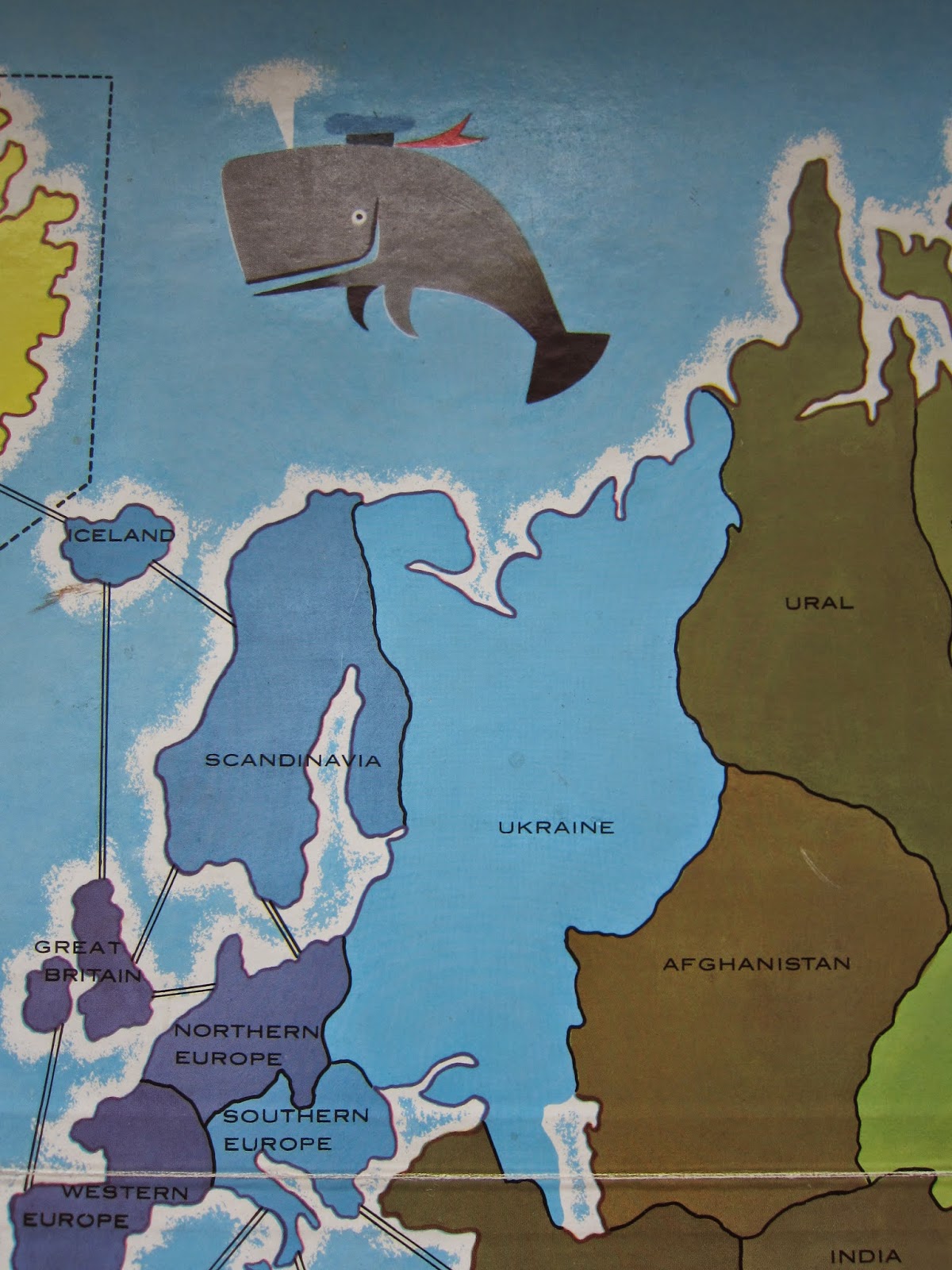 Status of the Ukrainian Crisis

The Ukrainian crisis is unfolding with the inexorable logic of a slow-motion train wreck.  I wrote those words about a month ago, but failed to finish this post.    I originally wrote that outright war was unlikely…then still unlikely… and now would say increasingly likely.  Considerable violence will occur before the crisis is resolved.

Russia has annexed Crimea, and cities of eastern Ukraine are in turmoil.  Separatists in these cities have created an ungovernable climate, using the same tactics used by rebels to overthrow President Yanukovich.  It is clear that Russian special forces are organizing the opposition, and performing the takeover of strategic infrastructure before handing control of these assets to local militias.

Perspectives on the Crisis

From the Russian perspective, the turmoil in Ukraine is a result of Western meddling.  Western interests attempted to pull Ukraine into the economic orbit of the European Union, and provoked a revolution, unseating a democratically elected president.   Further, Russia’s  annexation of Crimea is simply the settlement of a long-standing territorial dispute.  Most Russians of this generation regard Crimea as part of Russia, separated from Russia in 1958 by an arbitrary administrative act by Nikita Khrushchev.  In the post-war Soviet Union, Crimea was a popular resort destination for citizens of the Soviet Union.  Russians regard Crimea much as Americans would regard Florida.  It is a traditional resort and vacation land, a place of pleasant memories for today’s generation of Russians, their parents and grandparents.

From the Western perspective, Russia’s actions are a war of territorial expansion, an unimaginable return to the predatory aggression of World War II.  Western diplomats regard Crimea is an integral part of Ukraine.  Ukraine’s border were established two generations ago, and guaranteed by a treaty in 1994.  In that treaty, Ukraine gave up its nuclear weapons, in exchange for the guarantee of security of its borders.

Each perception contains partial truth.   But reality goes beyond either perspective.   Western interests did provoke this crisis.   Europeans pursued economic integration with Ukraine, in a genuine, well-meaning attempt to improve the lives of people.   American diplomats promoted the Western-leaning opposition in a geo-political game of domination, and undermined the existing democratic government.  Russia, for its part, is over-reacting, to its own detriment.  Vladimir Putin is using this crisis to demonstrate that he has no tolerance of such interference in satellite countries.   Russia does not regard Ukraine as an equal sovereign state, but rather like a vassal, a little brother bound to Russia politically, economically, and militarily.  Russia will not tolerate the disloyalty and insubordination of Ukraine pursuing a different destiny.

When protests in Kiev reached a tipping point, Russia acted opportunistically, implementing a well-defined plan to dismember Ukraine.   After Russia annexed Crimea, the next steps were predestined.  Despite reassurances by Putin, diplomats and news media, Russia never intended to stop after the annexation of Crimea.  Crimea is dependent on the Ukrainian mainland for water, for power, and for natural gas.  To obtain a secure border for Russian territory, it was immediately necessary to control Kherson province.   And secure control of Kherson province requires control of the Black Sea coast, and the roads and infrastructure of eastern Ukraine.    At this point, Russia cannot back away.   Russia will continue its well-practiced process of local insurrection, military acquisition of strategic infrastructure and annexation until it has acquired all of Eastern Ukraine and the Black Sea coast to Moldova.  Russia's goals will be to obtain a secure border, separation of Russian-speaking regions from Ukraine, control of critical infrastructure, and ownership of prospective petroleum resources within Ukraine.   These petroleum resources exist in the Donets basin of Eastern Ukraine, and the offshore areas of the Black Sea.  The Black Sea coast of Ukraine is a highly prospective but mostly unexplored petroleum province.

The political organization in a society must match the economic organization in that society.  Political structures which do not match the economic structure of the society are unstable, and will not endure.
When the economic unit consisted of a city and surrounding farmland, the political unit was the city-state.   As trading between cities increased, the level of political organization grew to principalities or small kingdoms.  Larger economies, such as ancient Egypt, carried correspondingly large political systems.  Empires sometimes arise as a result of aggressive leadership, but unless supported by widespread trade (e.g, the circum-Mediterranean trade of the Roman Empire), empires divide and die over the course of a few generations.   And so, the main political unit of the 20th century has been the nation-state.   In recent decades, the increasing scale of trade caused more consolidation.  The European Union represents the next scale of political organization, reflecting economic integration across an entire continent, spanning many nations, languages, and cultures.  North America is awkwardly adjusting to the integration of Mexican and American cultures.

The Soviet Union was perhaps the first economic super-state.  The Soviet economy spanned 15 countries, and was continent-wide in political and economic union.  But this first experiment as a super-state failed, due to the flawed paradigm of strong state control, micro-managed economic planning, single-party political rule, and disregard for human liberty.

The conflict in Ukraine is a conflict at the border between two expanding economic systems, each striving to improve lives through improved efficiency and economic integration.  But for the people with the misfortune to live in this torn country, there is no benefit.

Consequences
As usual, there will be no winners in this conflict.

Russia will consolidate its influence in Eastern Ukraine and the Black Sea coast; the only question is how much violence will occur.  Western Ukraine will adopt an economic alignment with the European Union.   The West will need to provide substantial economic support to Western Ukraine for many years.   The people living in the disputed territories will suffer from local conflict for years to come.   Russians living in other satellite countries may be subject to prejudice or expulsion, as the principle rationale for Russian incursions into Crimea, S. Ossetia, Abkhazia, and Eastern Ukraine is that Russians are living in these places, and need protection.  Satellite countries that wish to preserve their autonomy may decide to preempt this process by expelling ethnic Russians, as occurred in several former Soviet Republics, following the breakup of the Soviet Union.  Russia will see the departure of Western investment, jobs, and technology.  The Russian economic growth was already slowing before the Ukrainian crisis; economic sanctions are likely to push the economy into recession.

Vladimir Putin’s vision of Russia is that of a self-contained and self-sufficient society.  But the world is moving toward greater economic integration.  Every industry is benefiting from innovation and investment that is only possible in a world without economic borders.  Russia is shutting the door to participation in that world.

Putin’s Russia would be the center of an economic and political super-state, along the lines of the Soviet Union.   But Putin’s Russia has not corrected the flaws of the Soviet system.  And Russia lacks the wealth and technology to create a 21st century super-state.  Because of these actions in Ukraine, I believe Russia will become less wealthy, less influential, and more politically unstable in the coming decades.

And the question remains whether the adults and political leaders of the 21st century can hold the lives of people and the prosperity of society in higher regard than boys playing a game of world domination, fighting for control of a piece of territory called Ukraine.
Posted by Doug Robbins at 4:05 PM 2 comments: