How Big is the Biosphere? 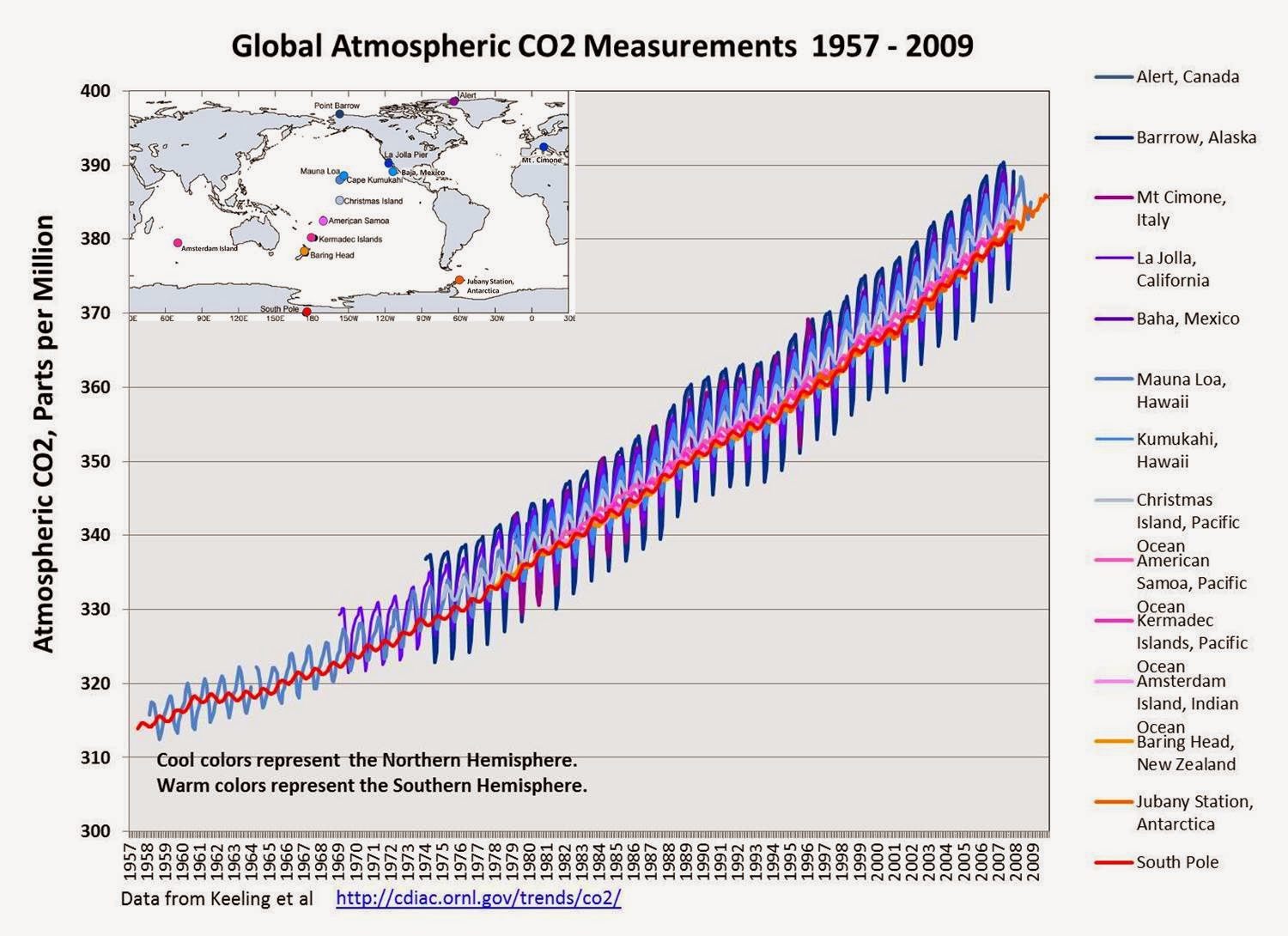 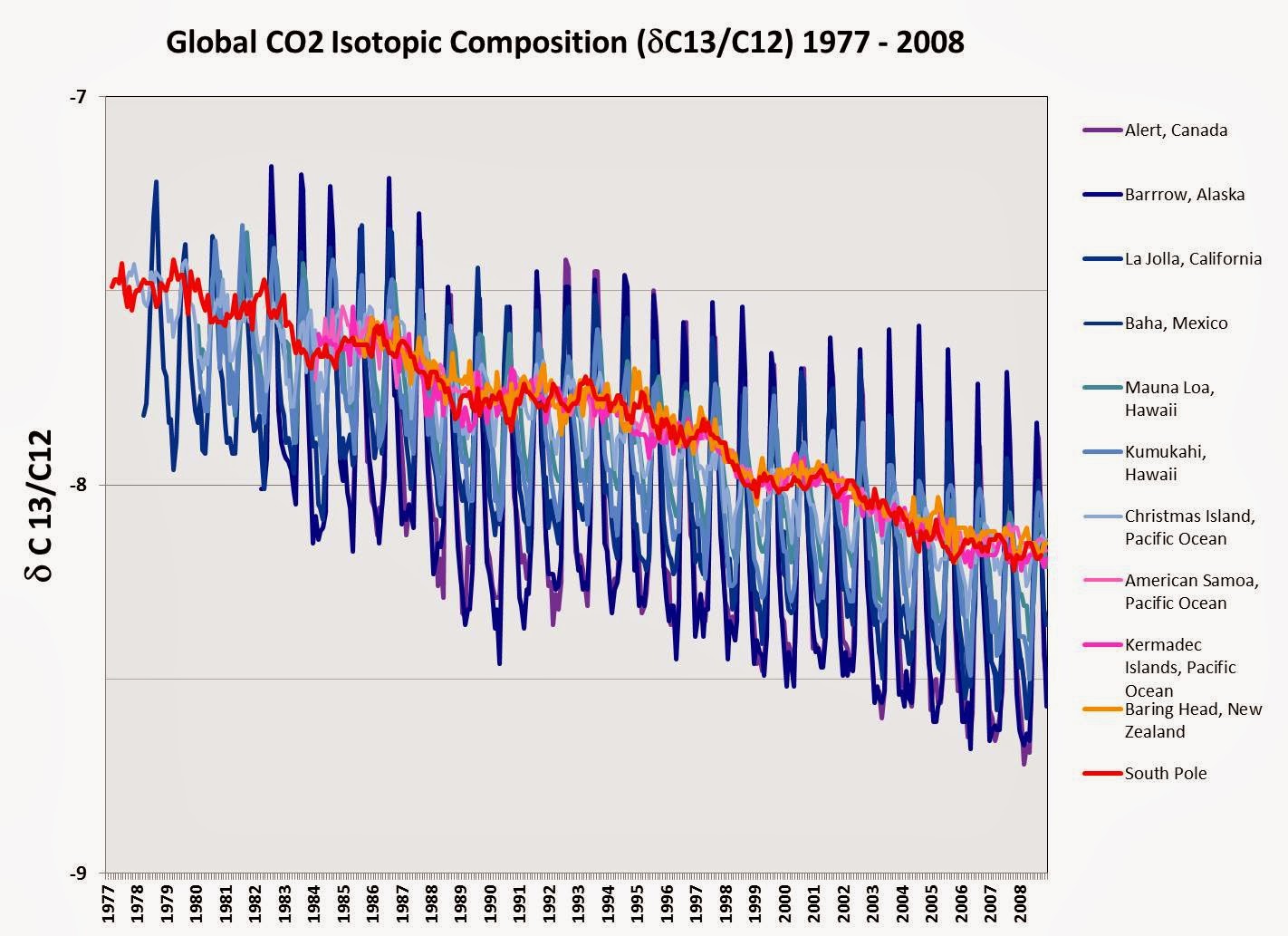 Figure 2 – Del 13 Carbon Isotope Data in Atmospheric CO2.
Plants preferentially take up C12 during the growing season, which changes the ratio of C13 to C12, and causes the seasonal signal in carbon isotopes.

By using a one-year rolling average, the seasonal cycle can be removed from the data, yielding the long-term trend of atmospheric CO2 (figure 3). 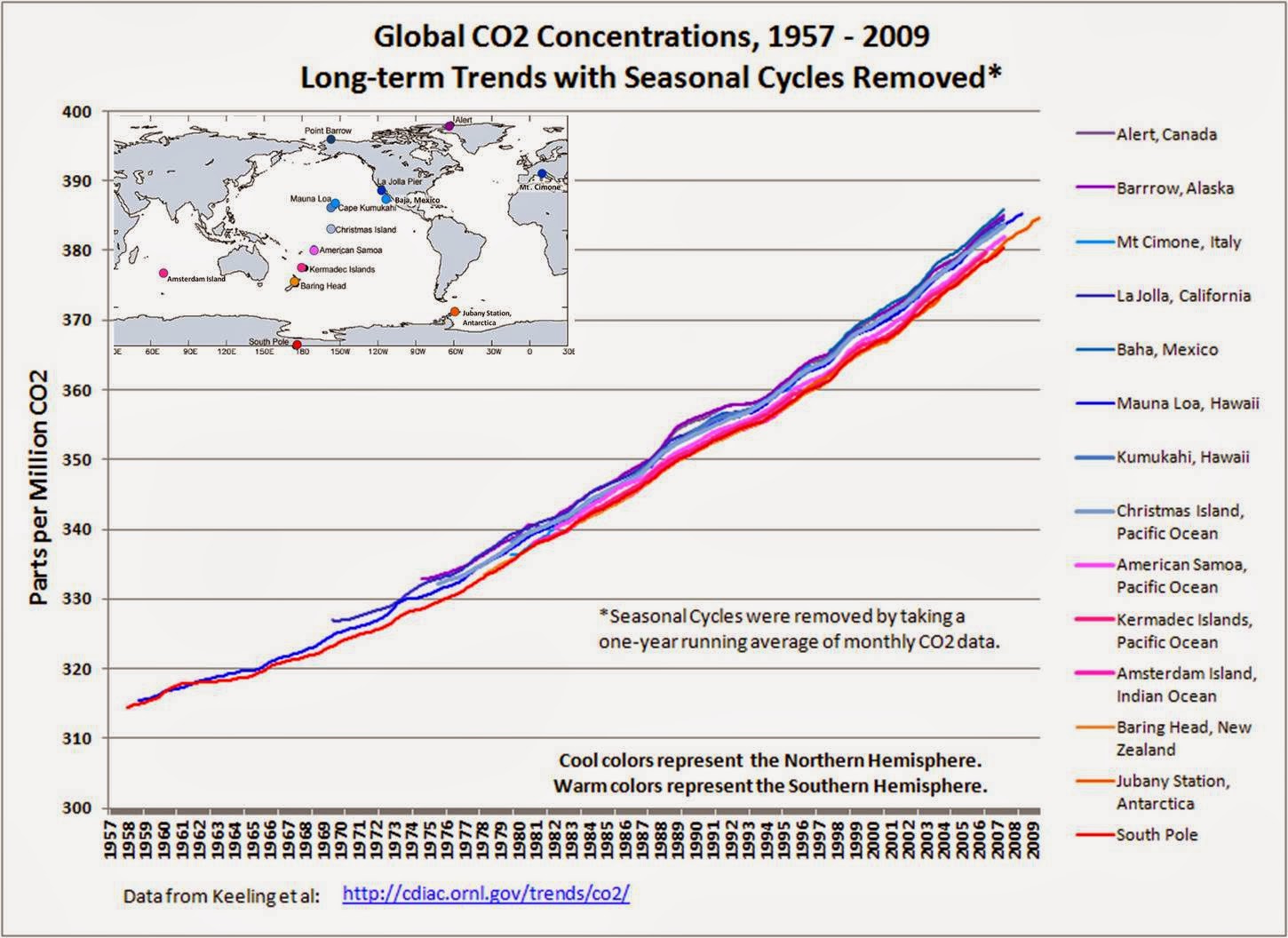 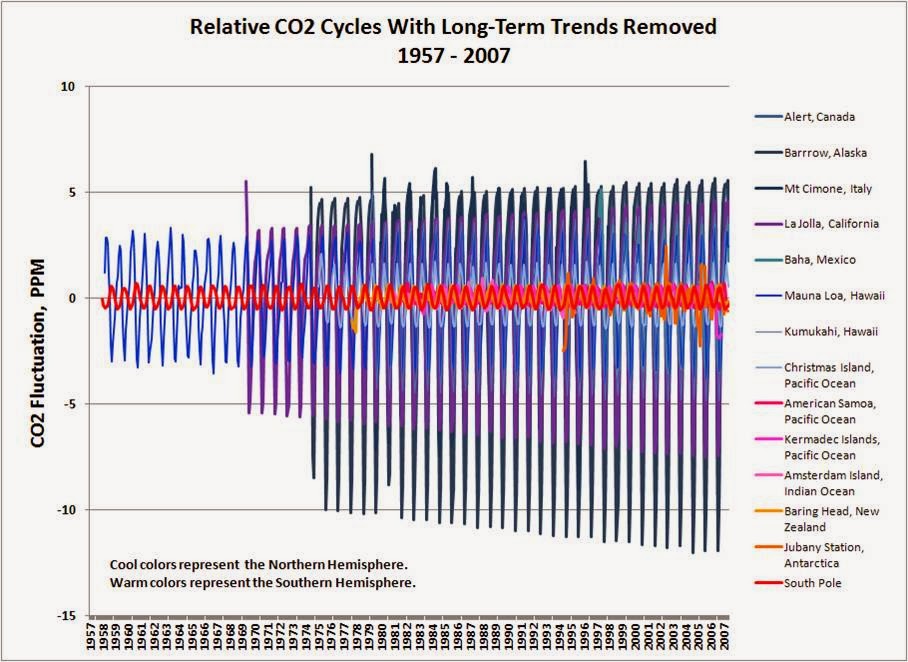 After removing the long-term trend from global CO2 observations, the remainder is the seasonal cycle.  A casual look at the chart reveals increasing amplitude of the cycle over the period of observations, particularly at high latitudes in the Northern Hemisphere. The amplitude can be extracted from the data, as shown in Figure 5. 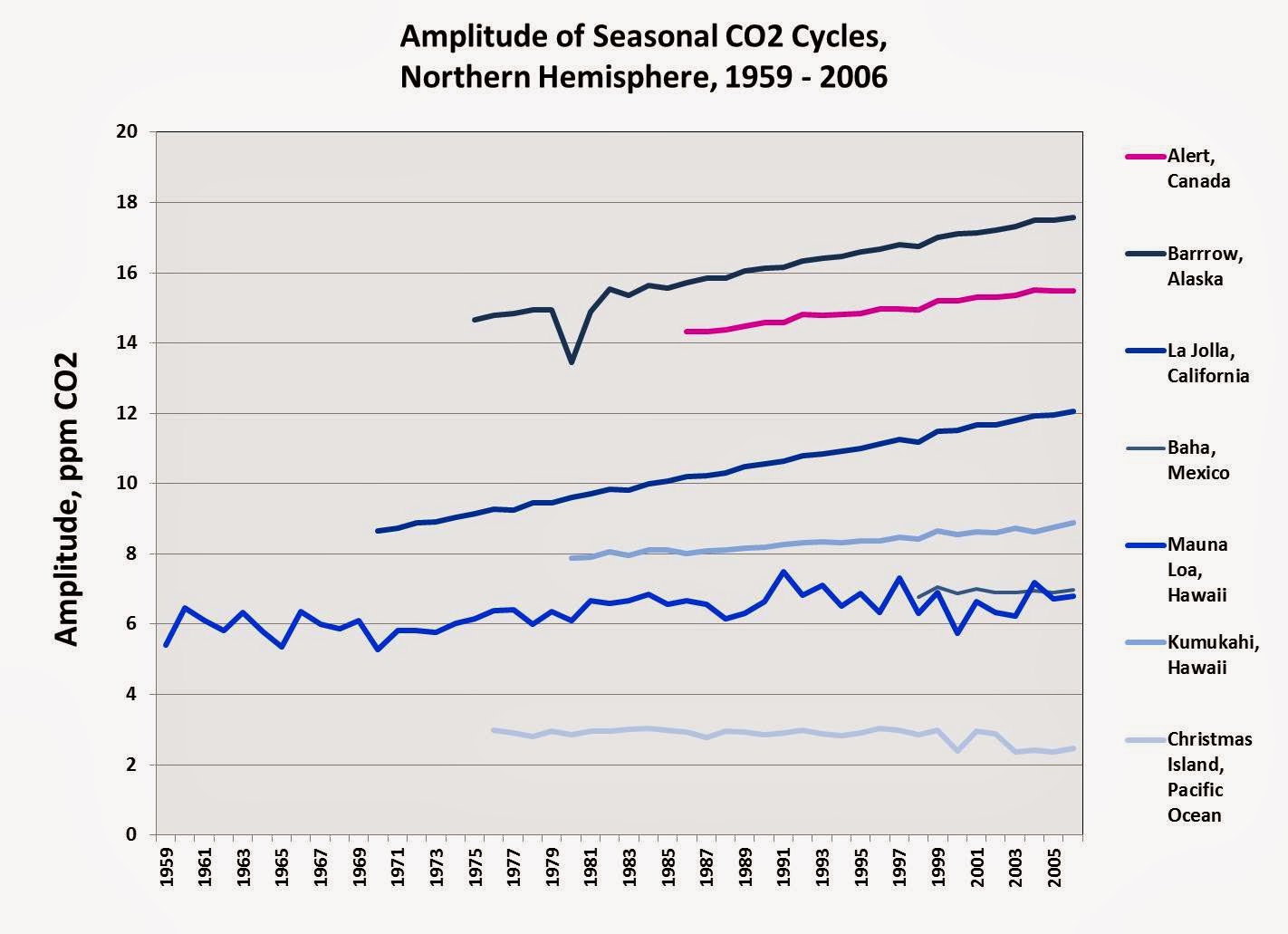 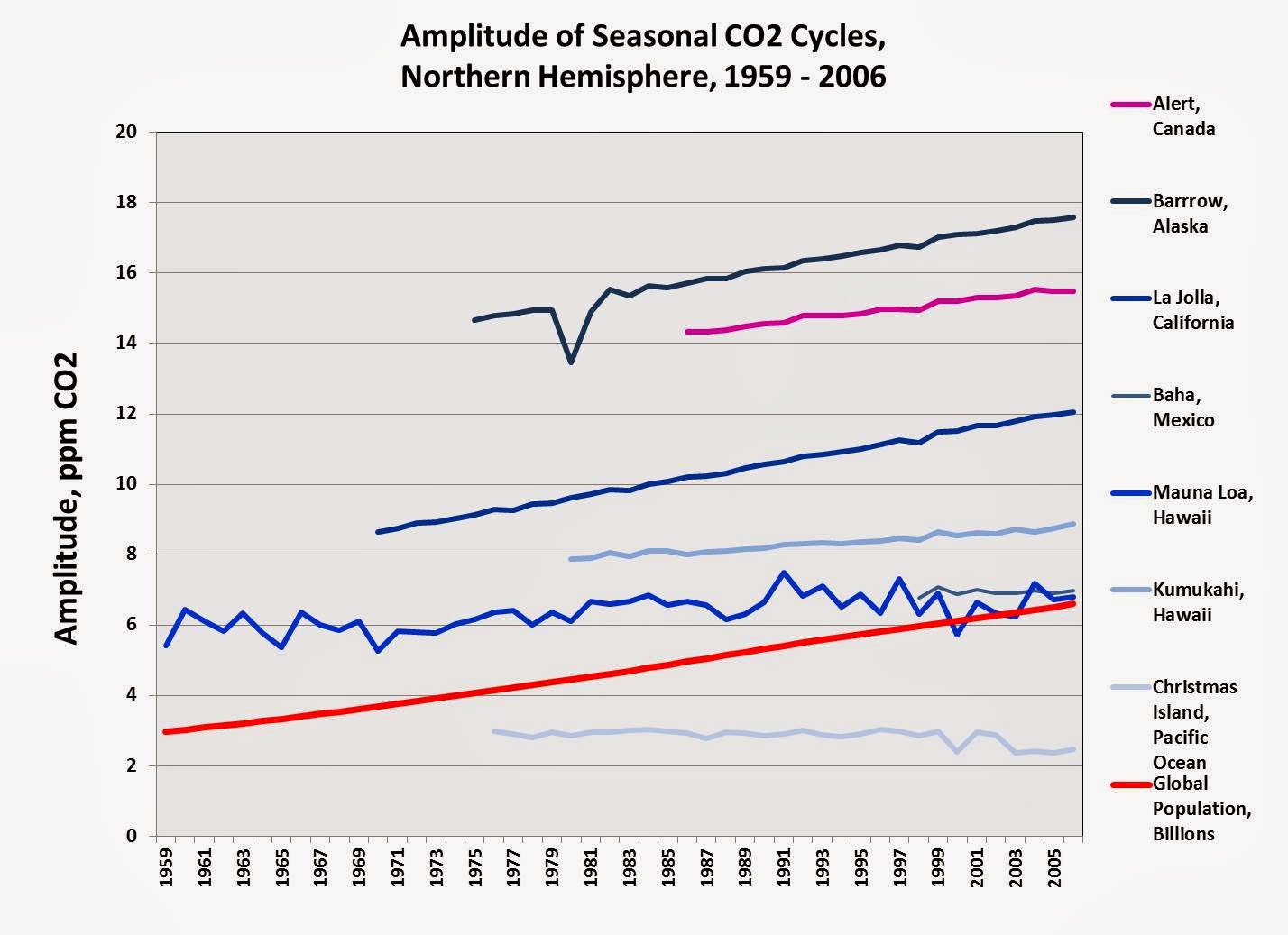 We can make a linear proportion between the amplitude of the seasonal cycle and population.  We can simply divide change in amplitude by the change in population, over the period of observations.   From that, we extrapolate that ratio to the point of zero population.   This gives us the portion of the seasonal cycle that is the result of human activities, and the remainder, which is the naturally occurring cycle..

The La Jolla data appears widely different from the other data, and was dropped from further calculations.  The average of the consistent observations shows that 34% of the 2009 seasonal cycle is the result of human activities, and 66% is the result of natural causes.

It is worth a quick comparison with other published estimates of the total global plant biomass.   Three respected sources include the U.S. Global Change Research Program, the U.S. Carbon Dioxide Information Analysis Center, and David McKay’s book, “Sustainable Energy Without the Hot Air”.
The US Global Change estimate for global vegetation biomass is 650 gigatonnes; the CDIAC estimate is 550 gigatonnes; and McKay’s cited estimate is 700 gigatonnes.

Global CO2 concentration data in this report is credited to C. Keeling and others at the Scripps Institute of Oceanography, also Gaudry et al, Ciattaglia et al, Columbo and Santaguida, and Manning et al.  The data can be found on the Carbon Dioxide Information Analysis Center.
http://cdiac.ornl.gov/trends/co2/
Data for CO2 released by fossil fuels is available from EIA CO2 Emissions from Fuel Consumption,
http://www.iea.org/co2highlights/co2highlights.pdf
And the BP Statistical Review of World Energy:
http://www.bp.com/sectionbodycopy.do?categoryId=7500&contentId=7068481

Global population figures from 1970 - 2010 were taken from Wikipedia.
The estimate for annual global agricultural biomass, circa 2009 was taken from a UN report:
http://www.unep.or.jp/Ietc/Publications/spc/WasteAgriculturalBiomassEST_Compendium.pdf

Monthly data for US fossil fuel consumption were taken from the EIA website:

Estimates for global vegetation biomass were found on sites for the CDIAC, US Global Change Research Program, and David McKay's "Without the Hot Air".