Partisanship of Political Donors According to Gender

Mark has an interest in names, professions and politics, among other things.  Mark gathers intriguingly obscure data and makes some awesome graphical data presentation.  He took data from the Federal Election Commission to study the first names of political donors.  What Mark did next is brilliant – he calculated a measure a partisanship for each name, based on the frequency with which people with that name donated to a particular candidate or party.

Mark excluded names for which there were fewer than 40 people with the same name (for statistical significance), then ranked the names according to partisanship.  First names are easy to separate by gender; fewer than 2% of names are ambiguous.  Certain names are also easily recognizable as ethnic names:  the most partisan name supporting Hillary Clinton (or any candidate) is Mohammed, easily recognizable as an Islamic man.  Similarly, the names Juan, Jose, Carlos and Luis appear in Hillary Clinton’s top 150 supporters, for the obvious reason that candidate Clinton’s policies are expected to be more sympathetic to immigrants than the Republican candidates’ policies. 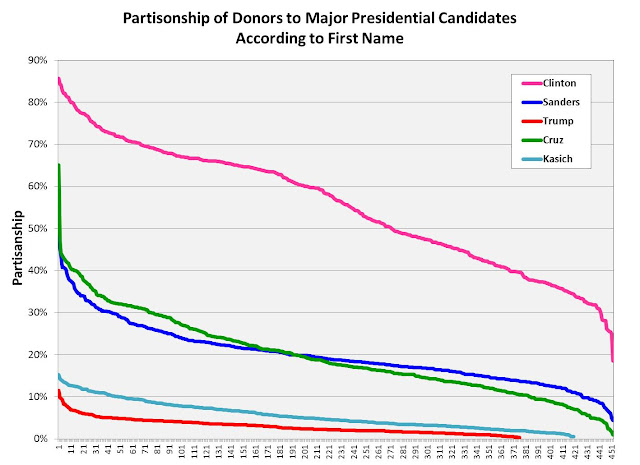 It is easier to visualize graphically.  The following bar charts show the top 250 supporters for each candidate, ranked by partisanship, with gender and ethnic origin indicated by color. 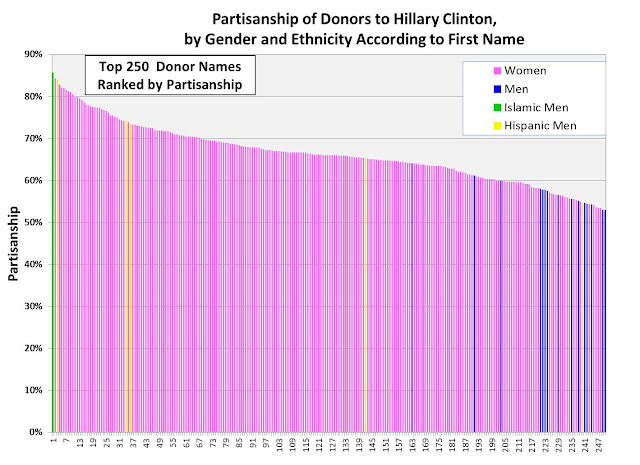 Hillary Clinton’s chart is a wall of feminine partisan support.    Although Clinton is less favored by men, she does begin to pick up male supporters at the respectable 60% mark, and continuing with over 100 men’s names with over 40% partisanship scores.

Democratic Party candidate Bernie Sanders predominantly shows men among his top supporters, but has fair support among women, also.  Women generally support the Democratic Party over the Republican Party by a ratio of about 5 to 3. 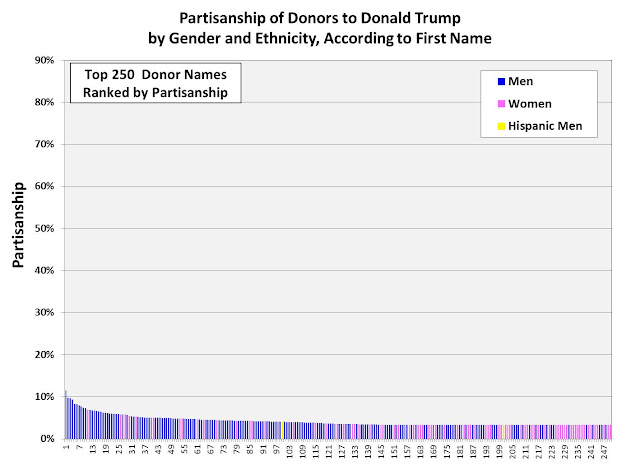 Republican Party candidate Donald Trump shows fairly low levels of support, but has not yet started serious public fund-raising.  Presumably, his future financial supporters will look a lot like the supporters of other Republican candidates. 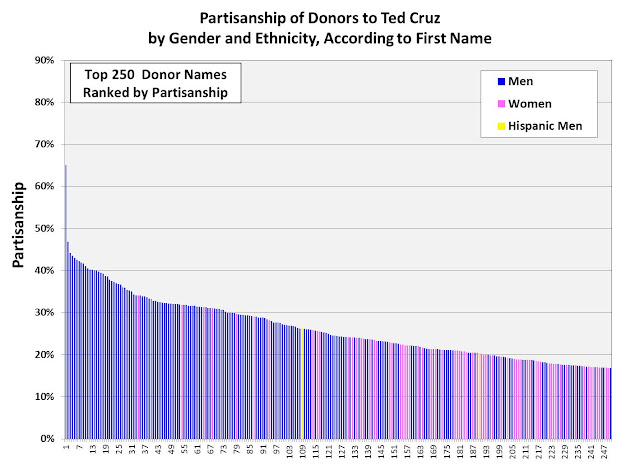 Ted Cruz was the most serious challenger to Donald Trump in the contest for the Republican nomination.  Cruz is popular among religious conservatives.  Cruz's supporters show a strong male bias among his most partisan supporters, but at levels much less than Hillary Clinton's supporters. 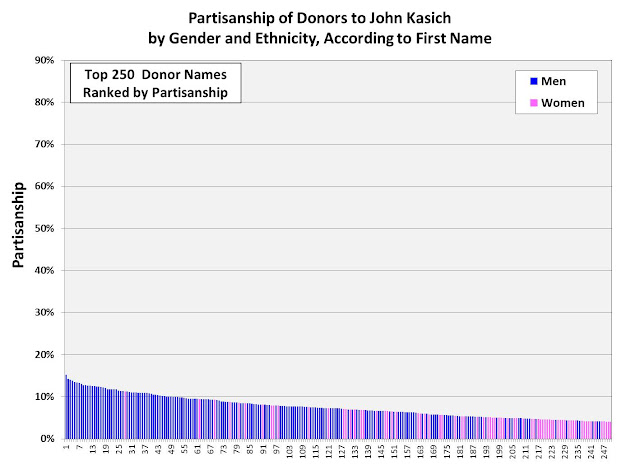 In past elections men donated to political campaigns at twice the rate of women, donated more often to political organizations not affiliated with a specific candidate, and gave more at higher levels.  This makes the partisanship among Clinton’s supporters even more notable.

To be fair, Donald Trump personally financed his campaign through the primary elections, and has not yet begun serious public fund-raising.   Thus, it is not surprising that Trump’s chart shows such low levels of support.

Elections are generally won by the candidate who is most successful at fund-raising.  This is not only because the funding provides for advertising and campaign work, but because political donations are a good measure of the numbers and loyalty of a candidate’s supporters.  By this analysis, Hillary Clinton is in a very strong position as we move past the primary season and toward the general election.

References:
http://apprecs.com/vis/democrat-republican-name
Unfortunately, I don’t know anything about Mark’s methodology in gathering the data, except that it came from the Federal Election Commission, and represents donations made since 1996.  I don’t know what time frame is represented by the data, or any constraints on interpretation.
http://www.nytimes.com/2015/10/15/upshot/the-gender-gap-in-political-giving.html?_r=0
http://regender.org/MoneyPoliticsGenderLens
http://regender.org/sites/ncrw.org/files/moneyinpoliticswithagenderlens_0.pdf
Kelly Dittmar, Money in Politics with a Gender Lens:  A collaboration between the National Council for Research on Women, the Center for American Women and Politics at Rutgers University’s Eagleton Institute of Politics, and the Center for Responsive Politics, January 2014
Women are under-represented at all levels of political donations, but especially at the higher levels.    In 2012, men donated to political campaigns at twice the rate of women, at reportable levels greater than $200.  About 2/3 of a percent of adult men make political donations at this level, compared to 1/3 of a percent of women.   Men also give more at higher levels, and give more to groups not affiliated with a specific candidate.    That gender gap in the 2012 election was narrower than in 2010, but larger than 2008.
I am puzzled by the reported total contributions by men and women in this report.   According to the report, in 2012, men gave $2.9 billion in political donations, while women gave $2.3 billion.   If women donate at half the rate of men, as reported, and give less, as reported, then the women’s donations should be less than 50% of the men’s donations.  I am unable to resolve this discrepancy.
http://www.people-press.org/2015/04/07/a-deep-dive-into-party-affiliation/
Women lean Democratic Party 52% to 36%.    Men are evenly divided  44% Dem – 43% Rep.
http://caffertyfile.blogs.cnn.com/2009/06/16/why-are-women-more-likely-to-be-democrats/
41% of women are Democrats, only 32% of men are Democrats.   25% of women are Republicans, while 28% of men are Republicans.
http://www.huffingtonpost.com/jay-newtonsmall/the-gops-biggest-problem-_b_9077708.html
Women make up 53% of the population, and turn out to vote at rates 10% higher than men.
http://www.gallup.com/poll/120839/women-likely-democrats-regardless-age.aspx
41% of women identify as Democrats, some nine points higher than the 32% of men who identify as Democrats. The 34% of men in this sample who are independents can be contrasted with the smaller 26% of women who are independents. There is little difference by gender in terms of identification as Republicans -- 28% of men are Republicans, compared to 25% of women.
Surprising graphs showing party affiliation by age.   Younger adults are much more likely to be Republican than older voters, with the corresponding difference that older voters are much more likely to be Independent.  Democrats show a more even distribution across the age spectrum, but still show more partisanship among younger adults than older adults.
http://www.people-press.org/2015/04/07/a-deep-dive-into-party-affiliation/
The share of political independents continues to grow, mostly at the expense of Republicans.
Women “leaning” Democrat exceed those “leaning” Republican by 52 to 36 percent.  Men are nearly equal among those “leaning” Republican and those “leaning” Democrat, by 44 to 43 percent.
http://www.huffingtonpost.com/jay-newtonsmall/the-gops-biggest-problem-_b_9077708.html


A fairly patronizing view of gender politics, implying that women do not pay any attention to numbers or data, but only respond to a narrative.  (Nonetheless, authored by a woman.)
Posted by Doug Robbins at 11:33 PM No comments: