An internet meme was recently posted in the Facebook group March For Science, by a frustrated scientist looking for ways to counter nonsense.  The meme claims that Mt. Etna has already put 10,000 times more CO2 into the atmosphere than all of the man-made emissions in history.  That claim is not remotely true.  Somebody just made it up, and put it on a photo of a volcano, and it has been shared thousands of times by people who don’t want to believe in science. 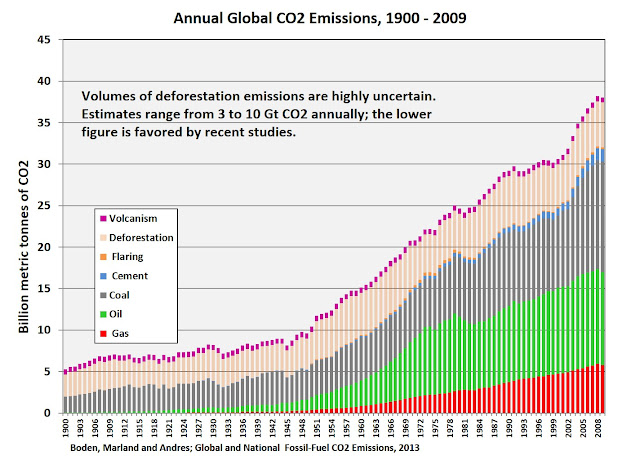 Measurement of Volcanic CO2 Emissions
Measurement of CO2 emissions from volcanos is accomplished by surface observations, aerial surveys (including manned flights and drones), satellite observations and soil-gas surveys.  A variety of methods are used, as described by Burton (2013).  Direct measurements of CO2 concentrations are supplemented by measurements of SO2 or tracer gases, when the relative concentrations of CO2 and the other gases is accurately known.  This process allows greater precision in CO2 determinations.

Volumes of Volcanic CO2 Emissions from Eruptive Events
The largest eruptive event of the past 100 years was the eruption of Mt. Pinatubo in Indonesia in 1991.   That eruption was estimated to have released 50 million tonnes of CO2 into the atmosphere (Gerlach et al. 2011, cited by Burton).  The eruption of Mt. Pinatubo released only one-tenth of one percent of the man-made CO2 emissions of 37 gigatonnes in the single year of 2009.

The Carbon Cycle
Natural processes which add and subtract CO2 from the atmosphere and oceans necessarily become balanced over geologic time.   Natural processes which add CO2 include eruptive volcanism, passive volcanic emissions, diffuse volcanic sources, volcanic lakes, mid-oceanic rifts, onshore rifts and metamorphism of carbonate rocks.  Natural processes which remove CO2 include the formation of limestone, by biologic and chemical processes, weathering of silicate rocks, deposition of land plants in bogs forming coal, and deposition of algae in anoxic marine environments, forming black shales.  There is debate about the importance of tectonic subduction in permanently removing carbon from surface environments, and the volumes of carbon which might be permanently removed by that process.  Although some of these processes are not well quantified, the volumes proposed are typically in the range of hundreds of million tonnes, far less than the gigatonnes of man-made carbon emissions.

Since this investigation began with an Internet meme, I decided to make my own, with a quantitative truthful statement and scientific references.  Here it is. 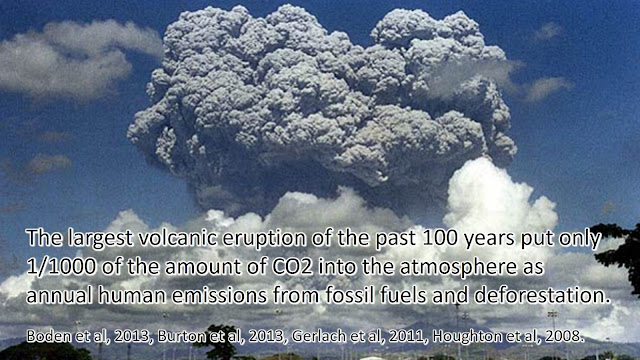 Burton et al, 2013,  Deep Carbon Emissions from Volcanoes
http://www.minsocam.org/msa/rim/RiMG075/RiMG075_Ch11.pdf
Discussion of CO2 flux from subaerial volcanic eruptions on page 332.
Total CO2 flux from volcanic sources:  637 mT per year, p. 341, table 6.
The eruption of Mt. Pinatubo in 1991 was the largest volcanic eruption since 1912.   That eruption produced ~50 Mt of CO2 (Gerlach et al. 2011).  Individual eruptions are dwarfed by the time-averaged continuous CO2 emissions from global volcanism.  The eruption of Mt. Pinatubo was equivalent to only 5 weeks of global subaerial volcanic emissions.
The average volume of eruptive CO2 emissions over the past 300 years was only 0.1 cubic kilometers, which suggests an annual rate of about 1 million tonnes of CO2 annually (Crisp, 1984, cited in Burton).
CO2 consumption from continental silicate weathering was 515 Mt/yr, (Gaillardet et al., 1999, cited in Burton).
Metamorphism accounts for the release of about 300 million tonnes of CO2 annually.  (Mörner and Etiope, 2002, Carbon degassing from the lithosphere. Global Planet Change 33:185-203, cited in Burton).