Ukraine -- A Nation on the Edge

The word Ukraine –  Україна or Украина –  derives roughly from the words «У край» (phonetically: "oo-krai"), meaning something like “near the edge”, usually translated as the borderland or frontier.  «У край» provides an appropriate alternative meaning, “on the precipice”.

Ukraine, on the eastern border of Russia, has historically been part of Russia, and part of Russian culture.  Major figures in Russian literature, politics and music were born or lived in Ukraine, particularly in Kiev, the ancient capital.  But the country lies between Russia and Western Europe.  It is divided in culture, language, economy and politics between the ties to East and West. 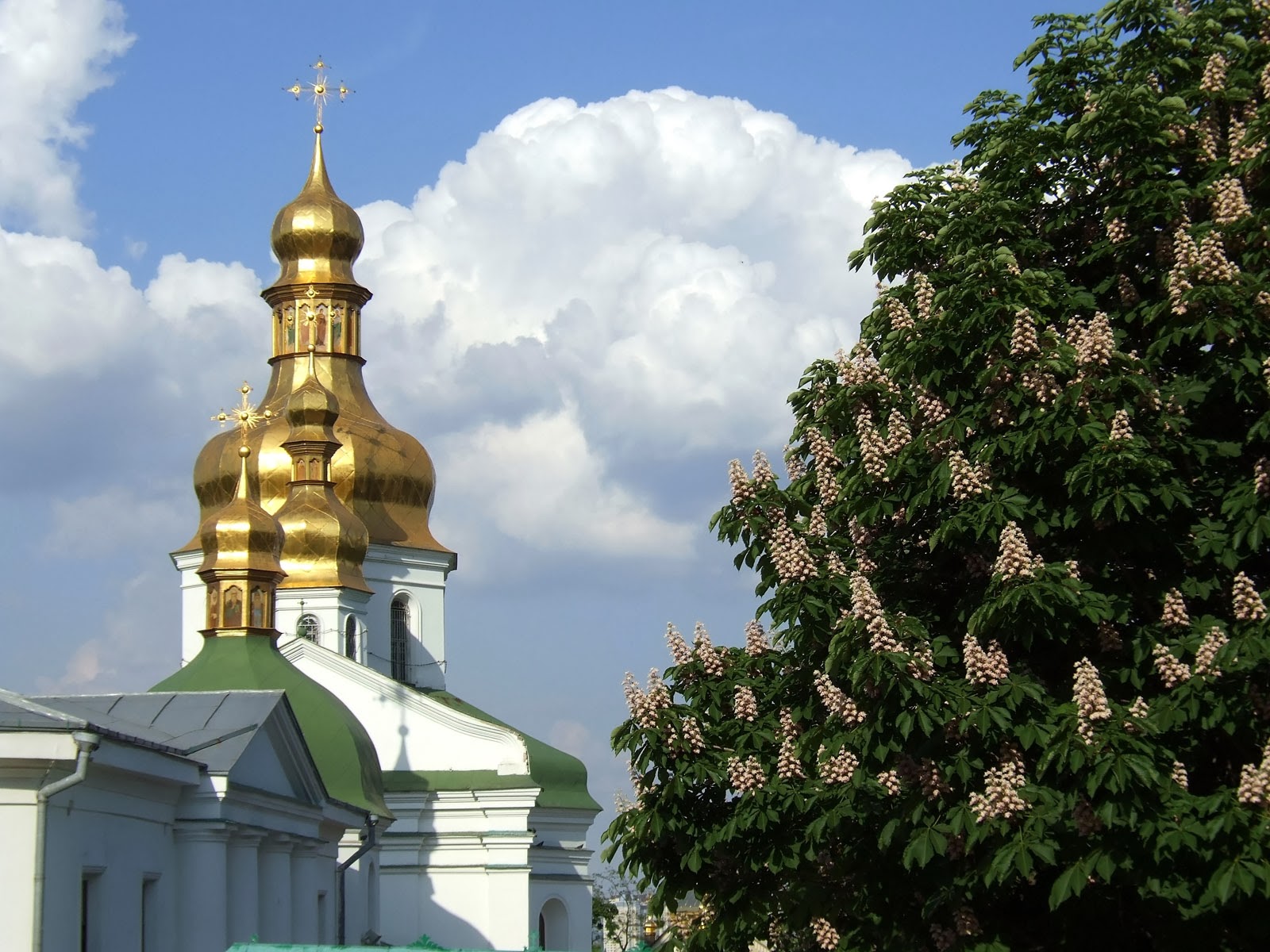 Kiev - City of cathedrals and chestnut trees
Ukraine today is in a deep crisis -- financially, politically, and of national identity.  This crisis was entirely predictable, even ten years ago.  There is great risk of civil war, or a separatist conflict such as enveloped the Georgian separatist provinces of South Ossetia and Abkhazia only a few years ago.    Navigating this crisis will require statesmanship and a commitment to peace by Ukrainians, their leaders, Russia and the West. 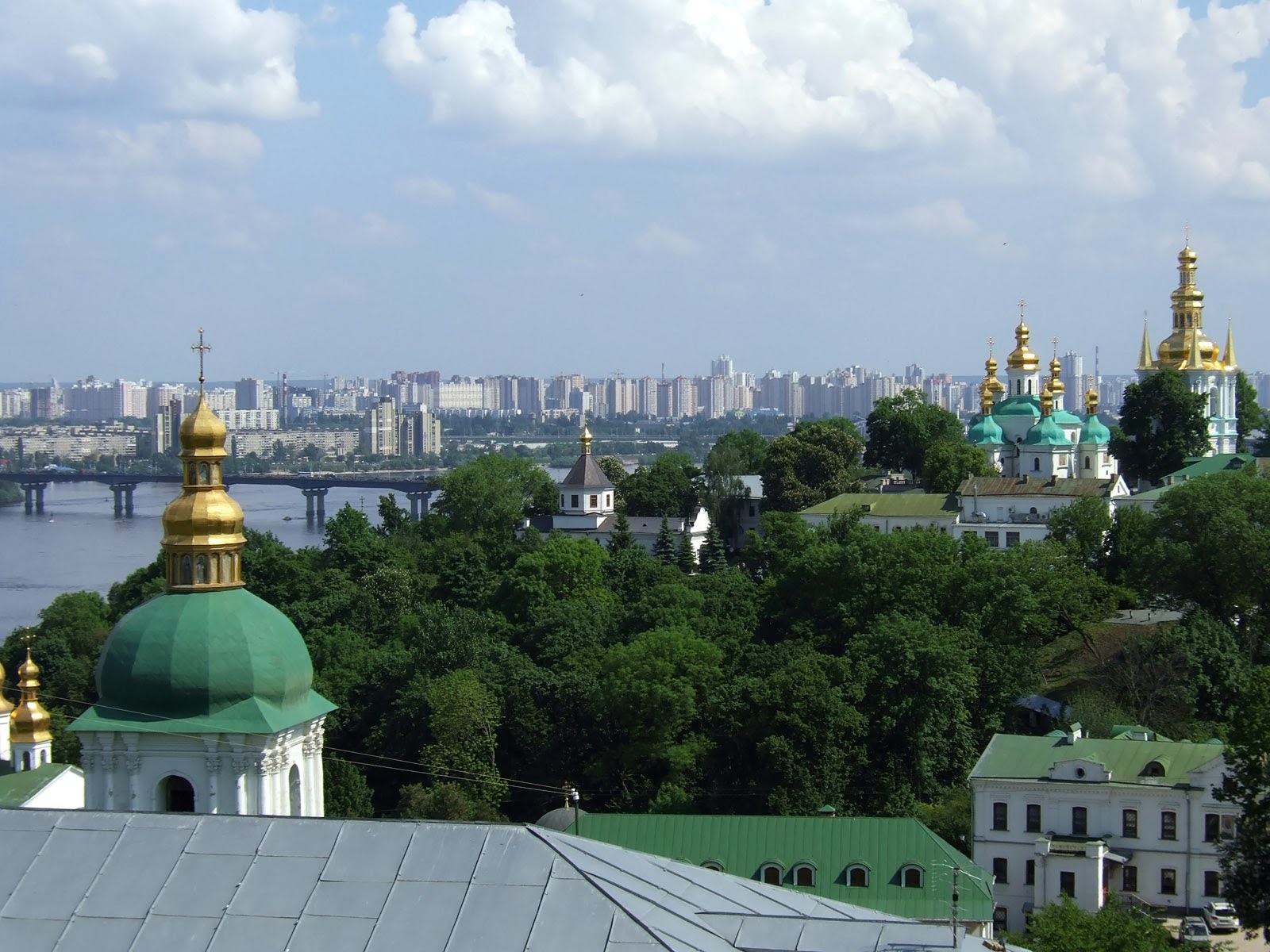 Dnieper River, ancient cathedrals, and a modern city.
History and Culture
In a sense, Russia was born in Kiev.  Kiev was the principal city of the Rus, around 1000 AD.  Under Vladimir the Great, Orthodox Christianity was adopted as the principal religion of Russia in Kiev, in 988.   Russian law was consolidated by his son Yaroslav the Wise, and the Russian political sphere expanded northward to the Baltic, southward to the Black Sea, and eastward along the vast territory of the Volga River. 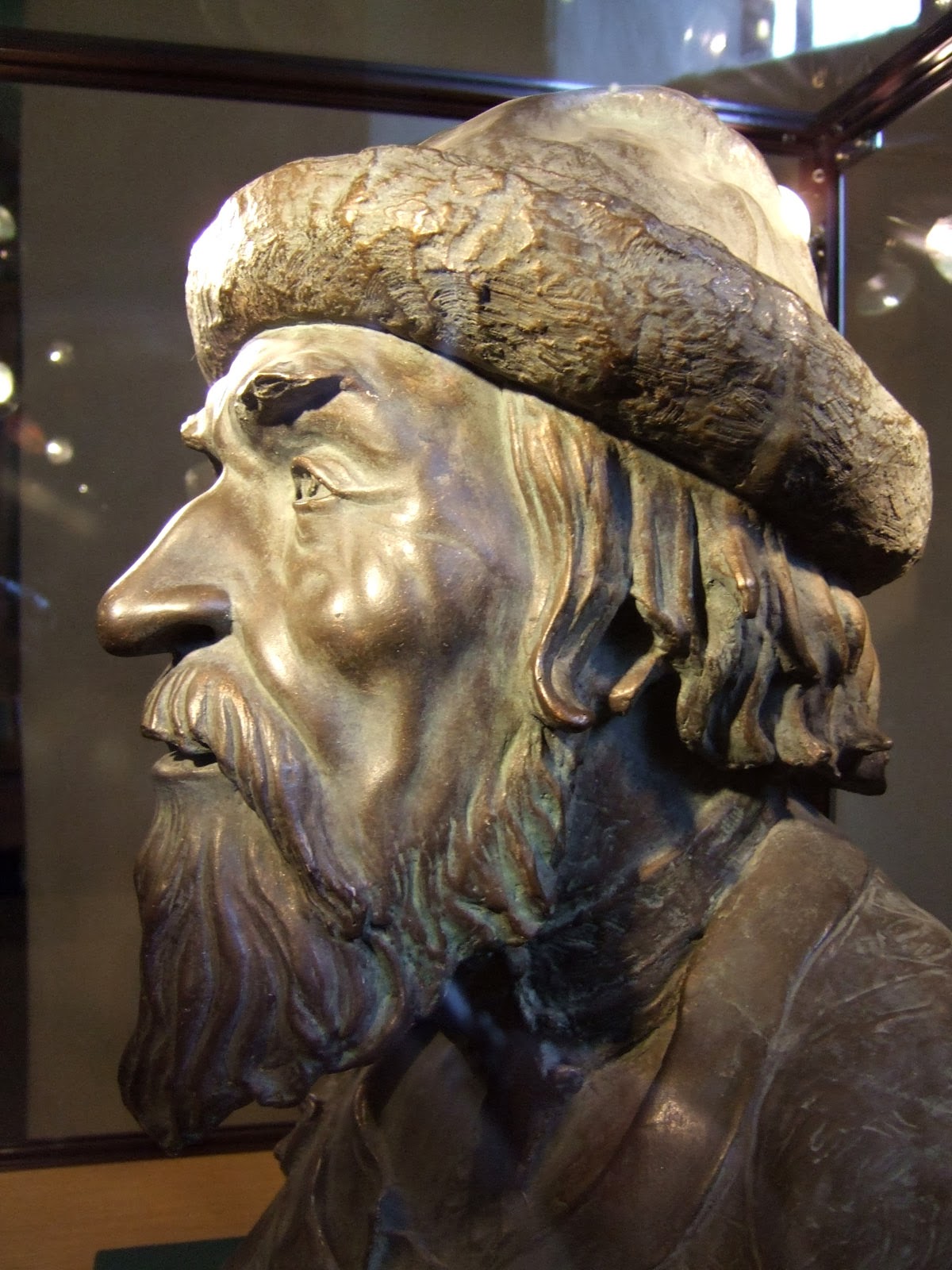 Yaroslav the Wise
As the center of Russia moved eastward, Kiev retained its importance and contribution to Russian culture.   Novelists Nikolai Gogol and Mikhail Bulgakov are two of many prominent Russians born in Ukraine.  From Mussorgsky’s “Night On Bald Mountain” to Bulgakov’s “Master and Margarita”, to Gogol’s “Night Before Christmas”, artists have used Ukrainian folklore, witchcraft and mysticism in their work, adding a distinctive Ukrainian flavor to Russian culture. 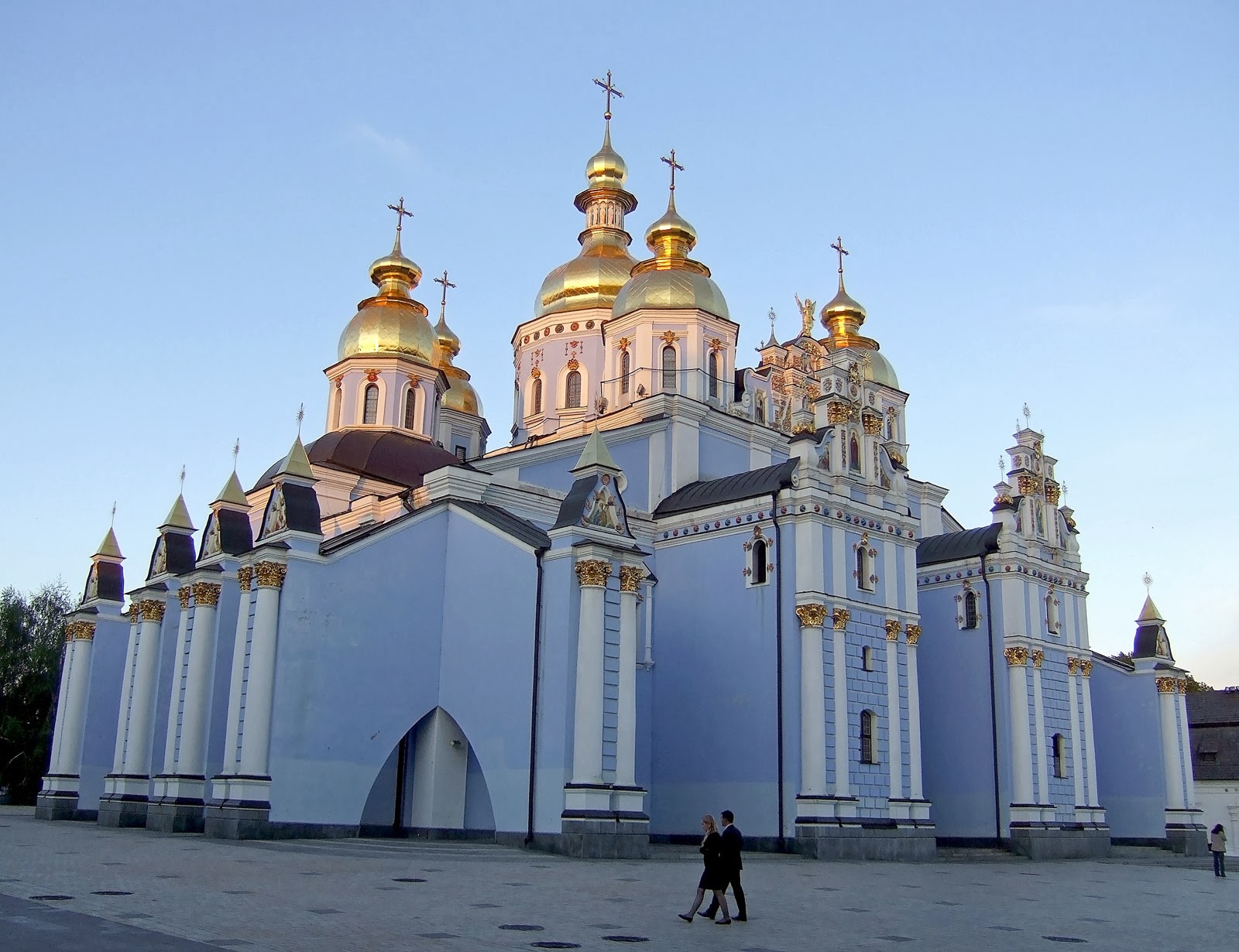 Saint Michael's Cathedral
Ukraine has its own language, its own alphabet, its own people, but is a divided country.  Eastern Ukraine is predominantly ethnically Russian, with Russian-speaking people.  Western Ukraine is ethnically Ukrainian, speaking the Ukrainian language.   Names of distinctly Ukrainian origin (for example, anything ending in …-shenko) can be recognized, and distinguished from Russian names. 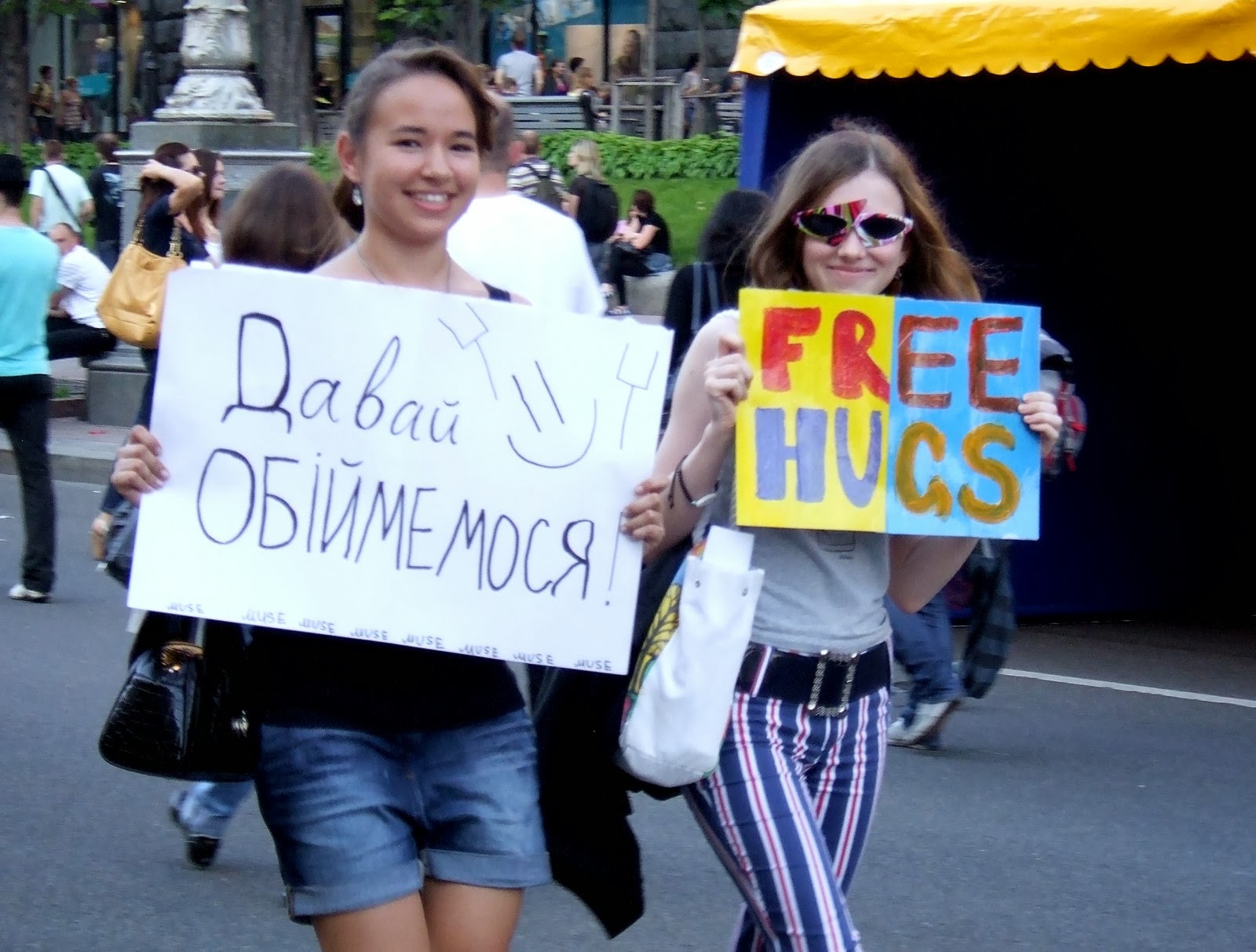 Friendly natives, during a street fair, 2010; in Ukrainian, "Let's Hug"
Ukrainian Economy and Natural Gas
Ukraine is economically dependent on Russia.  For decades, Ukraine has depended on subsidized natural gas from Russia as fuel for its heavy industry.  Heavy industry is located in eastern Ukraine, where iron ore from the vicinity of Belgorod, across the border in Russia, is brought into eastern Ukraine, where coal and natural gas provide the energy for steel-making.  Ukrainian steel production declined substantially due to the economic decline of 2009, contributing to the country’s financial crisis.

Natural gas is still the country’s largest import, and the cause of its persistent trade deficit.  The low cost of subsidized gas allowed Ukraine to continue as one of the world’s least energy-efficient countries.  Since 2004, Russia has gradually raised the price of gas to Ukraine, resulting in recurring trade disputes over stolen gas, gas pricing and non-payment of debts.  Ukraine still imports most of its gas.   However, consumption has fallen by more than 50%, from 118 billion cubic meters in 1991, to 80 bcm in 2005, to 55 bcm in 2012.  Ukrainian domestic production is about 20 bcm.

Ukraine has substantial and under-developed resources of natural gas.  Proved reserves are more than 1.1 trillion cubic meters, or 50 years of supply at current rates of production.  Gas is located in the eastern part of the country, in the deeper parts of the Dneiper-Donets basin.  The gas was originally discovered in the 1970s, but was left undeveloped.   This gas is high-pressure, high-temperature, and difficult to drill and produce using older equipment.  Old drilling equipment was all that was available in the country, even into the 2000s.  Import restrictions on modern drilling equipment, and the lack of a coherent petroleum laws have been serious obstacles to the exploration and development of Ukraine’s domestic gas resources.

The potential for new gas discoveries in Ukraine are significant.  Modern seismic techniques would certainly reveal additional drilling targets in the deep Dnieper-Donets basin; production of gas from the Black Sea has begun, and is growing; and there is good potential for unconventional gas from shale and coal within shallow stratigraphy of the Dnieper-Donets basin in eastern Ukraine.  Ukraine has the geological potential to become energy independent.

Dnieper-Donets Basin, Figure from OGJ
Ethnic and Cultural Division
Eastern Ukraine is predominantly populated by ethnic Russians, speaking Russian as their native language.  Eastern Ukraine is economically tied to Russia through its heavy industry, supplies of natural gas and iron ore, and markets.

Western Ukraine is predominantly populated by ethnic Ukrainians, speaking Ukrainian as their native language, although most speak Russian fluently.  The economy of western Ukraine involves agriculture and trade with Western Europe.  The capital, Kiev, is a vibrant and beautiful city where these divisions meet in sharp, but so far peaceful, contrast.

Political Environment and Prominent Figures
For years, Ukrainian politics have been plagued by allegations of corruption, press censorship, political fraud and attempted assassination involving all players in the political stage.   Massive street demonstrations have become the process of political dialog rather than orderly elections.

It is worth noting brief biographies of three of the major political figures in Ukraine.
Former President Victor Yuschenko is a Ukrainian nationalist, and was a leading opposition figure prior to the Orange Revolution of 2004.   During the campaign for presidency of Ukraine following the revolution, he was allegedly poisoned in an assassination attempt.  Yuschenko was disfigured, and blood tests repeated showed extraordinary levels of dioxin in his body.  Nevertheless, there is still dispute in Ukraine regarding the veracity of the assassination attempt and medical tests.  Yuschenko served as president from 2004 to 2010, but his term was marked by political division and in-fighting.  Little was accomplished in governmental or policy reforms.  In 2010, Yuschenko received a meager 5% of the vote in a new presidential election.

Former Prime Minister Yulia Tymoshenko has an extensive history of corruption in her early political career.   During this time she and her family became extremely wealthy as a result of dealings in Ukraine’s natural gas business.  Dark-haired and a shrewd self-promoter, she re-invented her appearance as a blond Ukrainian doll as she rose to prominence in national politics.  Yulia Tymoshenko is currently in prison, serving a seven-year term for corruption.

Viktor Yanukovych has served as President of Ukraine from 2010 to the present.  He served as Prime Minister of Ukraine from 2002 to 2004.  Generally regarded as a loyalist for ties with Russia and Ukrainian business, he has stated “Ukraine’s integration with the EU remains our strategic aim”, while advocating a balanced policy between Russia and the West.   In Yanukovych’s youth, he was twice imprisoned for crimes of assault and robbery, spending a total of 3 ½ years in prison by the age of 22.    Substantial voting irregularities are alleged in Yanukovych’s electoral victory as President in 2010.    Numerous complaints also exist regarding political censorship of the media.

Prospective Trade Agreements
Ukraine appears to be at a crossroads with regard to trade orientation between east and west.   Ukraine has been in negotiations with the EU regarding a prospective trade deal for five years.   At the eleventh hour, and apparent in response to objections from Russia, President Victor Yanukovych vetoed the trade agreement.  In exchange for canceling the trade agreement with the EU, Russia promised to provide substantial economic assistance (roughly 15 billion dollars of low-interest loans) to Ukraine, and discounts on future natural gas deliveries.  The agreement with Russia was concluded on December 17.

The EU, for its part, has demanded political reforms from Ukraine as terms to secure the trade agreement.  In particular, the EU has demanded the release of Yulia Tymoschenko from prison, regarding her punishment as political repression.

According to the latest news, the trade agreement with the EU, which was vetoed by President Yanukovych late last month, is still in play.   At this time, according to statements by Prime Minister Mykola Azerov, there is the possibility of three-party talks, involving the EU, Russia and Ukraine.

Ukraine – A Nation on the Edge
On December 29, at the close of 2013, NBC News published an article called, "World in Turmoil: Seven Countries to Watch in 2014".    NBC's list of troubled countries included Afghanistan, Brazil, China, Iran, Russia, South Africa, and Syria.  While not diminishing the difficulties and risks faced by other countries, I would suggest that the country most at risk for turmoil and tragedy in 2013 is Ukraine.

The situation in Ukraine brings to mind unpleasant reminders of the August 2008 war in the separatist Georgian provinces of South Ossetia and Abkhazia.   Ethnic divisions and ineffective government threaten to divide the country, which in the extreme case could descend into violence.

Pragmatically, in the near term, Ukraine should turn toward Russia.  The synergies of Russia resources and Ukrainian industry are significant, and the EU is unlikely to match the level of economic aid that has been promised by Russia.  In the longer term, Ukraine must develop its own resources, and trade that is aligned according to economic benefit, rather than political principles.

Ukraine has every possibility of becoming a prosperous country.   However, substantial reforms are necessary before Ukrainians can realize and enjoy real prosperity.  Ukraine has not yet established effective policies for its economy, effective government, or a credible democracy.    Ukraine must establish a coherent policy for the development of its natural resources to attract investment and technology from modern oil companies.  Ukraine must establish a rule of law which protects the integrity of business, media, and politics.   The political process in Ukraine must change from democracy by barricades to democracy by ballots, in free and honest elections.   And the leadership of Ukraine must stop behaving like Mafia gangsters, and start behaving as statesmen serving in the best interest of their nation and their people. 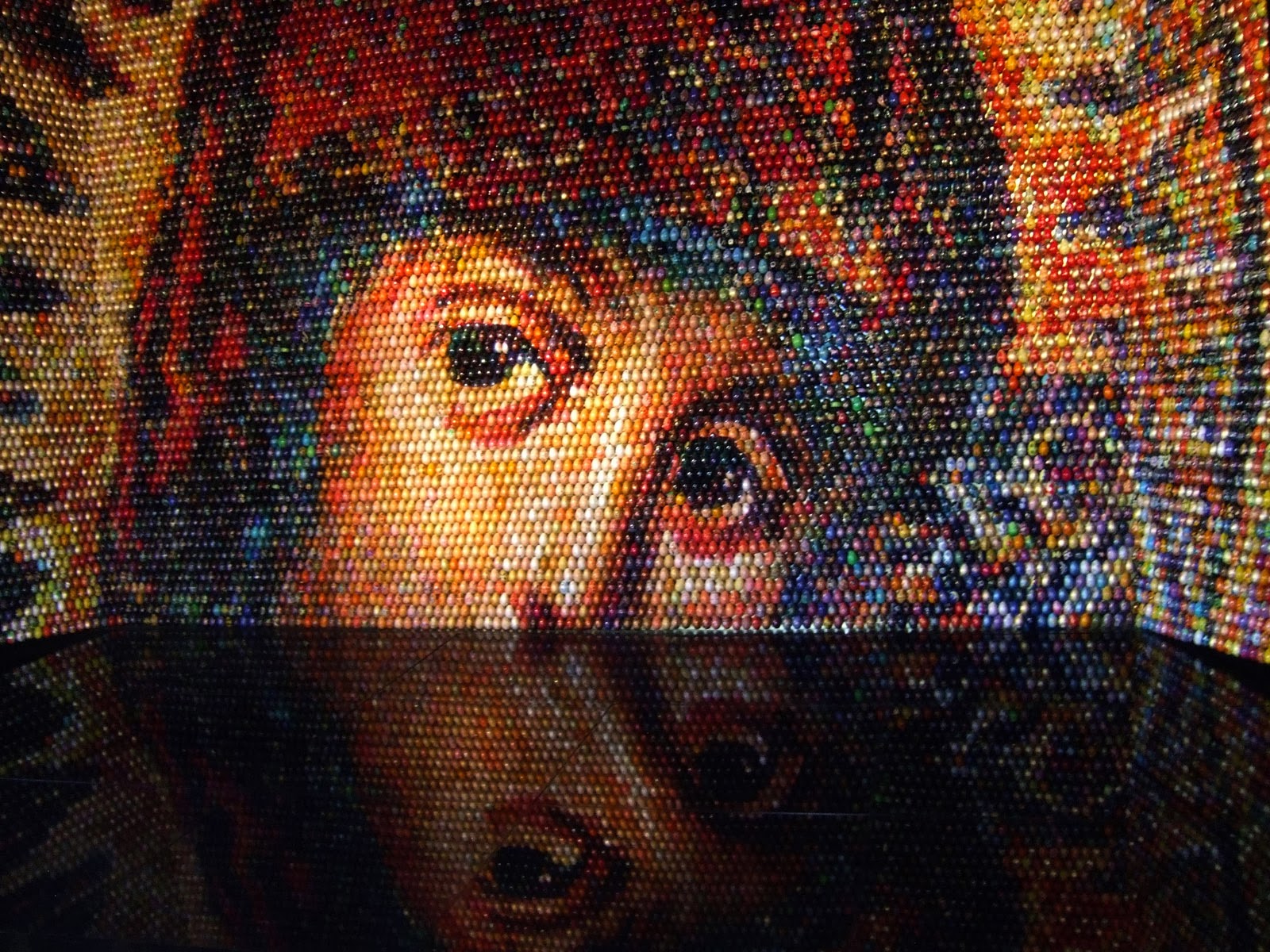 Mosaic of Ukrainian Easter Eggs, "The Gaze Into Eternity"

http://dougrobbins.blogspot.com/2014/03/ukraine-nation-on-edge-update-march-1.html
Posted by Doug Robbins at 3:40 AM