The Limits to Growth

I just finished reading "The Limits to Growth", 1972 edition, which I should have read a long time ago.  It's an excellent book.   The principal authors were Dennis and Donella Meadows, Carleton College '64 and '63, respectively (yay, Carleton).

The book presents the results of a world economic and social computer simulation.  At the time of the 1972 model development, the authors did not claim that the model was either predictive or quantitative.  Instead, the focus was simply to construct the model and observe the behavior of the simulation.  After the "standard run" base case was created, the model was perturbed in various ways, and the variation between runs was considered.  Model inputs matched historical data from 1900 to 1970, and matched the exponential rates of growth observed through most of the 20th century.  The number of parameters was very small:  Population, Food Supply, Arable Land, Non-renewable Natural Resources, Industrial Production, Pollution, etc.  Feedback loops were created which established relationships between the parameters, and provided for limits on exponential growth. 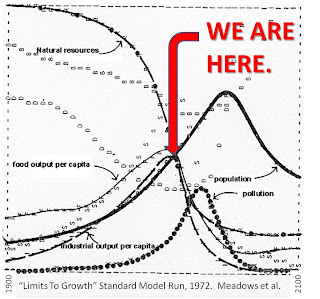 In almost every case considered, population, food supply, and industrial production rise to a peak, and then fall, sometimes catastrophically, before the end of the 21st century.

According to the 1972 model, world population was forecast to reach 7 Billion by about 2017.   According to current UN estimates, population will reach 7 Billion earlier, sometime in October, 2011.  The LTG estimate was pretty good for a model that was not intended to be predictive or quantitative.  However, we can note some changes in the current picture, as compared to the simulation from 1972.   First, global birth rates have declined much faster than assumed in the model runs.  Secondly, lifespan has increased faster then the model, and I believe that global wealth has risen higher and faster than imagined in the model.  I also believe there we have a much greater ability to expand production of non-renewable resources than considered in the models, although I expect diminishing returns from that expanded production (as described in my blog post regarding Energy Return On Investment).
http://dougrobbins.blogspot.com/2011/09/energy-return-on-investment.html
And the model generalizations regarding "pollution" appear to be unfounded, or uncalibrated.  But there is a good correspondence between atmospheric CO2 and the pollution parameter of the LTG models.

Graham Turner of CSIRO presented a 30-year lookback on the LTG findings, presented here:
http://www.csiro.au/files/files/plje.pdf.
Matthew Simmons, author of "Twilight in the Desert" (R.I.P., 2010), also presented a look-back on the 1972 LTG.  http://www.greatchange.org/ov-simmons,club_of_rome_revisted.pdf

So we are left with the question:  Will food, wealth and population collapse in the 21st century, as predicted in the 1972 world model?  Time will  tell.
Posted by Doug Robbins at 11:01 PM