Carbon Isotopes in the Atmosphere, Part I -- How Big is the Carbonsphere?

How Big is the Carbonsphere?

Carbon released by burning fossil fuels is isotopically lighter and distinct from atmospheric carbon.   The distinct signature of fossil fuel emissions provide a tool for tracking the movement of carbon through the atmosphere and through reservoirs exchanging carbon with the atmosphere.  We can estimate the size of the carbonsphere, given the known volumes of fossil fuel emissions and the change in isotopic composition of the atmosphere.  The calculation makes a simplifying assumption, that there is no fractionation of isotopes during the exchanges with carbon reservoirs.  These estimates may prove useful in climate change research and modeling atmospheric CO2.
---
Carbon isotopes provide an important tool for understanding the destiny of carbon emitted by burning fossil fuels.  The distinctly different isotope ratio shows us the movement of carbon in the atmosphere, oceans, the earth’s surface and biosphere.

Carbon isotopes on earth exist in a ratio of about  1% C13 and 99% C12.    A measure of the ratios was devised to easily represent small but meaningful differences in the isotopic composition of different materials.   The measure is d C13/12, usually called “del 13”.  This measure expresses the ratio of the stable isotopes carbon 13 and carbon 12, as compared to the C13/C12 ratio in a standard material.

The calculation of del 13 and seasonal fluctuation of carbon isotopes are explained in my earlier blog post: http://dougrobbins.blogspot.com/2012/03/seasonal-carbon-isotope-cycles.html. 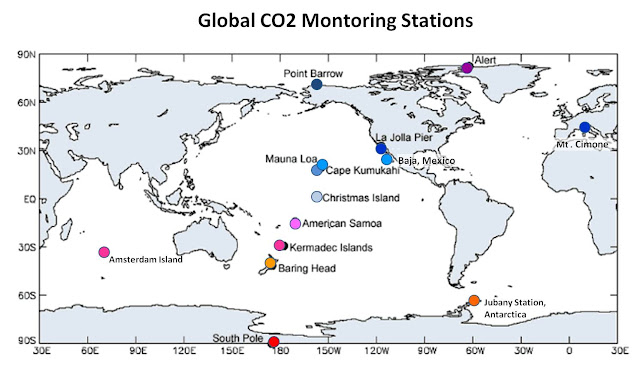 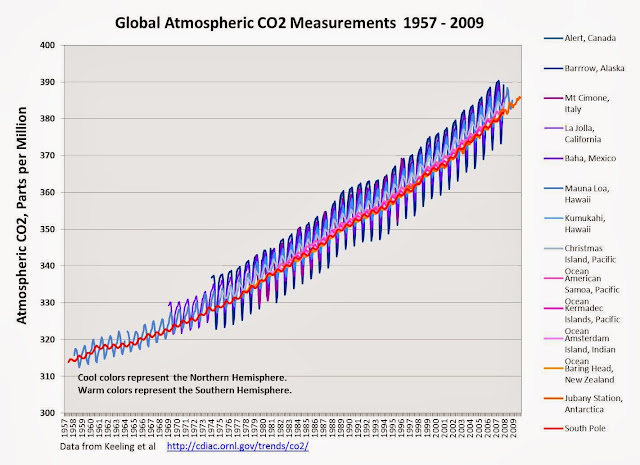 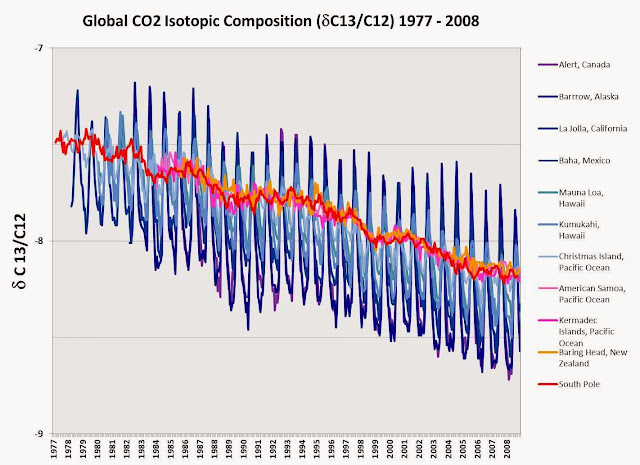 The atmospheric carbon isotope data appears noisy in comparison to the graph of bulk atmospheric CO2 seen in previous posts.   We’ll simplify the problem by taking the annual global average del 13 in data available from CDIAC, the Carbon Dioxide Information Analysis Center (Andres, Boden, and Marland, 2009).   [In fact, much of the "noise" in the carbon isotope record is actually meaningful data.  We explore these variations in part 2 of this post, "CO2 Carbon Isotopes and the El  Nino Climate Cycle".

Figure 4 shows the global average isotope record, by year (R.J.Andres, T.A.Boden and G.Marland, 2009).  Andres, Boden and Marland (2012) also calculated the volume of global emissions by year and the average del 13 values of those emissions.   These data allow calculation of the expected change in atmospheric del 13, given the known annual volumes and isotope ratios of fossil-fuel emissions. 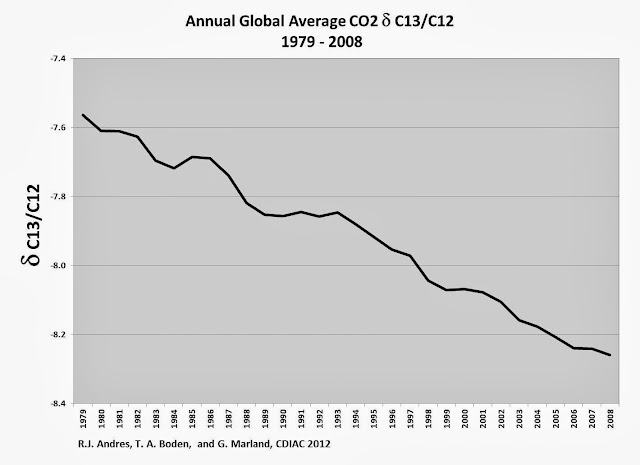 Atmospheric del 13 declined from a value of – 7.6 in 1978 to – 8.2  in 2008, reflecting the influx of light CO2 from fossil fuels.  But the decline in del 13 is much less than would be expected if all of the fossil-fuel emissions stayed in the atmosphere.   The difference shows that light isotopes from fossil fuels are being diluted into a much larger volume of carbon.

We can use a dilution model to solve for how much carbon from fossil fuels remains in the atmosphere.   Using the known volume of fossil fuel emissions, and average del 13 ratio of those emissions, we can calculate, for each year, how much the del 13 ratio of the atmosphere should have changed.   A weighted average equation is used for the dilution model.

Carbon isotope data show that the picture is complicated.  Isotopes ratios show that the greater part of fossil-fuel emissions are exchanged with other earth systems, while bulk CO2 levels seem to show a much larger retention of fossil fuel emissions in the atmosphere.   The process involves exchange and displacement.  As fossil fuel emissions are absorbed by carbon reservoirs,  other carbon is displaced, and enters the atmosphere to maintain equilibrium.   The specific molecules released by fossil fuels exchange places with carbon in carbon reservoirs, and atmospheric CO2 continues to rise.
Let’s look at some of the isotope data, and then consider the size of the carbonsphere.

If we assume that 60% of the fossil fuel emissions remain in the atmosphere, and run a simple mixing calculation, we conclude that the del 13 ratio of the atmosphere should have declined to about -12, a change in del 13 of -4.4.   Instead, we see a decline of only -0.7, from the initial value of -7.6 in 1979 to a value of -8.3 in 2008.   Looking at the thirty-year history of carbon isotope observations, we can calculate that only about 14% of the carbon released by fossil-fuel emissions remains in the atmosphere, by matching the results of a mixing model to the observed decline in global del 13.   The rest of the fossil-fuel carbon is diluted into a much larger reservoir of carbon than the atmosphere. 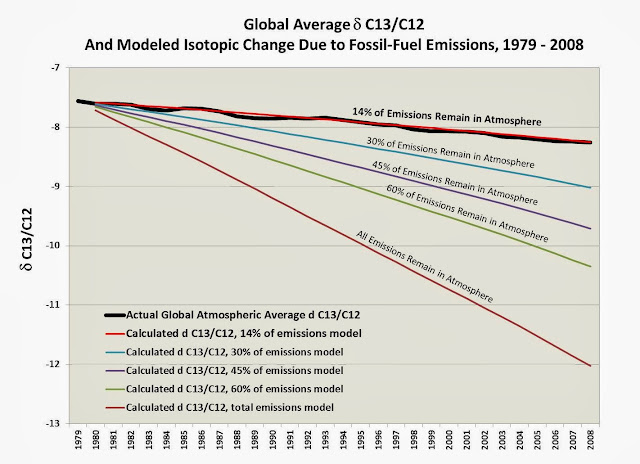 I’m going to coin a term, and call the sum of all carbon reservoirs freely exchanging carbon with the atmosphere, within an annual time-frame, the Carbonsphere.  The Carbonsphere includes the atmosphere, all plants and animals on earth (including you), dissolved carbon in the shallow ocean, weathering surfaces on limestones, coral reefs, seashells and limestone precipitating directly in the ocean.   The Carbonsphere does not include limestone below the weathering surface or carbon in the deep oceans.  These do not participate in the annual exchange of carbon with the atmophere.

With the same data used above, we can solve the inverse problem: what is the volume of reservoirs exchanging carbon with the atmosphere?  It is a dilution problem, described by the coffee analogy in the introduction.  We know the volume of fossil fuel emissions, the isotopic composition of those emissions, and the isotopic change in the atmosphere.  We can find the volume of the carbonsphere by the dilution of fossil fuel emissions.  (Note, this calculation assumes negligible fractionation of carbon isotopes during exchange with carbon reservoirs.) 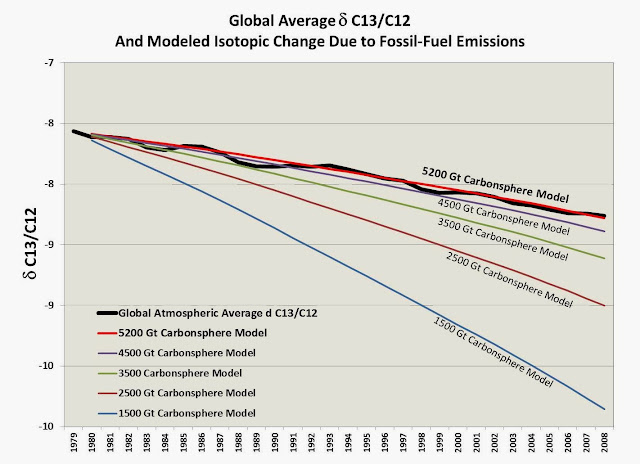 We can speculate about the discrepancy between the results of the dilution calculation, and those obtained by making a carbon inventory.   One possibility is that the atmosphere is not in equilibrium with the carbonsphere, i.e., that isotopically light carbon from fossil fuel emissions is tied up in reservoirs near the point of emission.  Thus, there is a transient effect, a lag before the equilibration of the emissions and the atmosphere.   We will see some evidence of this in the second part of this article.   Secondly, it may be that there is a greater dispersion of carbon in the ocean than estimated in the carbon inventory.  We will see some evidence of that, also, in the second part of this article.   But for the moment, the conclusion of this work is that the carbonsphere – the sum of all carbon reservoirs freely exchanging carbon with the atmosphere – is larger than previous estimates.

I should note that these data and calculations include only fossil-fuel emissions and making cement.   The emissions volumes and del 13 averages do not include carbon released through changes in land use, principally clearing forests for agriculture by burning.  Addition carbon from burning forests is also isotopically light.  If carbon from changes in land use is included in the calculations, we would see that an even smaller percentage of carbon emissions remain in the atmosphere, and the calculated size of the carbonsphere would be even larger.

Conclusions:
1)  Isotopically light CO2 released by burning fossil fuels provides a tool for tracking movements of carbon through the earth’s systems, and for calculating the size of carbon reservoirs exchanging carbon with the atmosphere.