Daniel Yergin, author of “The Prize” and “The Quest”, chairman of Cambridge Energy Research Associates, recently wrote an interesting opinion for the Washington Post.  Yergin speaks of a new world oil map, centered not on the Middle East, but centered in the Western Hemisphere.   Yergin cites production from Canadian oil sands, shale oil in the United States, and deepwater discoveries in Brazil, as remaking the global oil map.

http://www.washingtonpost.com/opinions/daniel-yergin-for-the-future-of-oil-look-to-the-americas-not-the-middle-east/2011/10/18/gIQAxdDw7L_story.html
Is Yergin right?   Does this make any sense? 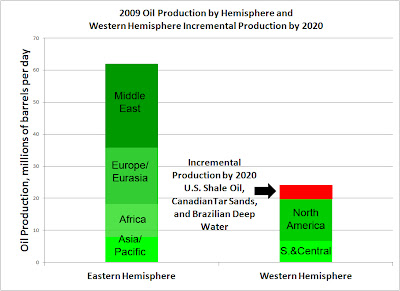 Let’s look at some data.

This figure is available as an interactive graphic on-line:  http://chartsbin.com/view/wyw 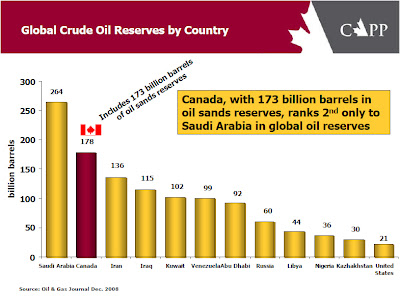 Canadian oil reserves are reported to be 2nd largest in the world, behind Saudi Arabia.  Canadian reserves consist of 5 billion barrels of conventional oil, and 173 billion barrels of oil sands.  Properly speaking, the oil sands are not reserves, but contingent resources.  The capital and resources required for production must be obtained, before the oil sands can be classified as reserves.   Resources are not production.  Canadian geologist David Hughes estimates that oil sands production will be limited to 2.5 million barrels per day, due to limits on natural gas and water required for production, and light oil dilutants required for transportation.  http://www.aspo-usa.com/fall2006/presentations/pdf/Hughes_D_OilSands_Boston_2006.pdf 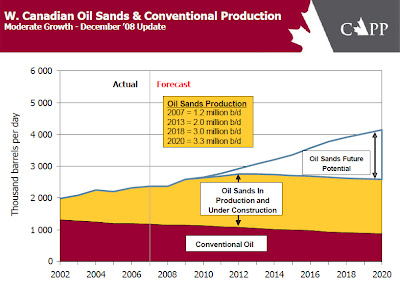 Canadian production is currently 3.2 million barrels.   Production is expected to increase by about 1 million b/d by 2020.

North Dakota currently produces 350,000 barrels per day; there are estimates that production could double within a decade, and pipeline capacity is being constructed to carry 1 million barrels per day.
It is likely that success can be duplicated in other regions (Eagle Ford shale, Texas; Niobrara shale, Great Plains; Green River Shale, Wyoming).  According to a US Government report, an aggressive goal for shale oil development in the United States would be 2 million barrels per day by 2020. http://fossil.energy.gov/programs/reserves/npr/publications/npr_strategic_significancev1.pdf

Brazil produces 2.6 million barrels per day (2009 data).  Brazil’s production has been increasing at about 4.5 % per year, and could add another 1.3 million barrels per day in ten years.  New exploration discoveries are located in deep water offshore Brazil's southern coast, and are found under a thick layer of salt.  Although new reserves may total 40 billion or 50 billion barrels, these will be very expensive and difficult fields to develop.  http://lucian.uchicago.edu/blogs/bric/files/2011/05/Afonso-H.M.-Santos-Brazilian-Energy-Overview1.pdf 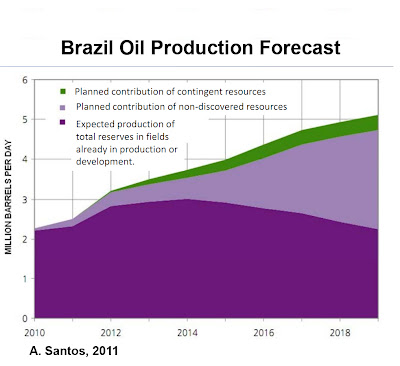 What was Yergin thinking?   He is focused on contingent resources, rather than proved, production-ready reserves.  He may be focused on potential investment opportunities for Western oil companies.  In the very long run, it may be possible to significantly increase Western Hemisphere oil production, but only with high investment costs and long delay, and it is unlikely to shift the geopolitical balance of Western dependence on oil from the Eastern hemisphere.

Mature giant oil fields in the United States have produced about 35% of original oil in place, and are approaching the technical limit of recovery.   Globally, and particularly in the Middle East, giant oil fields have only produced about 22% of original oil in place.  There is greater potential for reserve growth in the Eastern Hemisphere than the Western Hemisphere, as re-development, secondary and tertiary recovery methods are applied to these fields.

Peak Oil V:  Discovered, Undeveloped Reserves in the Middle East
http://dougrobbins.blogspot.com/2012/02/peak-oil-v-discovered-undeveloped.html
Production from the Middle East has been dominated by a small number of giant and supergiant fields.   The large fields imply the existence of many smaller fields which have not yet been developed or produced.  About 1300 fields without significant production are indicated in summary tables; these may contain about 300 billion barrels.   Again, the advantage is to the Eastern Hemisphere.
-------------------------------------------
References and Credits:
Many thanks to Carleton '78 classmate Anne Croley, who brought the Daniel Yergin article to my attention.
http://www.theoildrum.com/node/5395
http://www.aspo-usa.com/fall2006/presentations/pdf/Hughes_D_OilSands_Boston_2006.pdf
http://www.capp.ca/getdoc.aspx?DocID=147850&DT=PDF
http://www.eia.gov/state/state-energy-rankings.cfm?keyid=28&orderid=1
http://www.thisismoney.co.uk/money/markets/article-1707785/BG-set-to-raise-Brazilian-oil-find-forecast.html
http://www.adn.com/2011/01/02/1629025/north-dakota-oil-production-is.html
http://www.msnbc.msn.com/id/43085246/ns/business-oil_and_energy/t/bubbling-crude-americas-top-oil-producing-states/
http://www.eia.gov/state/state-energy-rankings.cfm?keyid=28&orderid=1
http://www.eia.gov/countries/